Prevalence and determinants of tobacco use among school going adolescents in Cambodia and Vietnam: a cross-sectional study

Objective: To investigate the prevalence and correlates of tobacco use among school-going adolescents.
Methods: This cross-sectional study consisted of a secondary analysis of existing cross-sectional survey data from the Global School-based Health Survey from Cambodia and Vietnam in 2013, and comprised schoolchildren. Data was analysed using Stata 13.
Results: The study comprised 7,137 schoolchildren. The overall mean age was 15.5±1.4 years. Besides, 3,806(53.33%) were from Cambodia and 3,331(46.67%) from Vietnam. Overall, 279(5.1%) students reported currently using tobacco (smoking and/or smokeless), including 214(6.2%) boys and 65(1.6%) girls, and 127(3.6%) in Cambodia and 152(5.2%) in Vietnam. Current cigarette smoking was 239(4.5%) and smokeless tobacco use was 143(2.4%).
Conclusion: Tobacco use was found to be significantly high among schoolchildren in Cambodia and Vietnam.
Keywords: Tobacco use, Adolescents, Cambodia, Vietnam. (JPMA 67: 1024; 2017)

This cross-sectional study consisted of a secondary analysis of existing cross-sectional survey data from the Global School-based Health Survey (GSHS) from Cambodia and Vietnam. Details and data of the GSHS can be accessed online.15 The year of data collection was 2013 in both Cambodia and Vietnam. A two-stage cluster sample design was used to collect data to represent all students in grades 6-10 in each country.15 At the first stage of sampling, schools were selected with probability proportional to their reported enrolment size.15 In the second stage, classes in the selected schools were randomly selected and all students in selected classes were eligible to participate irrespective of their actual ages.15 Students self-completed the questionnaire under the supervision of trained research assistants.15 To calculate the sample, prevalence estimation was 4%, sensitivity 0.1 and specificity 0.7, confidence 95% and desired precision of 0.05. Using EpiTools the sample size calculated for an assumed large (infinite) population was 6,592.
The study instruments used were from the GSHS15 (Table-1). 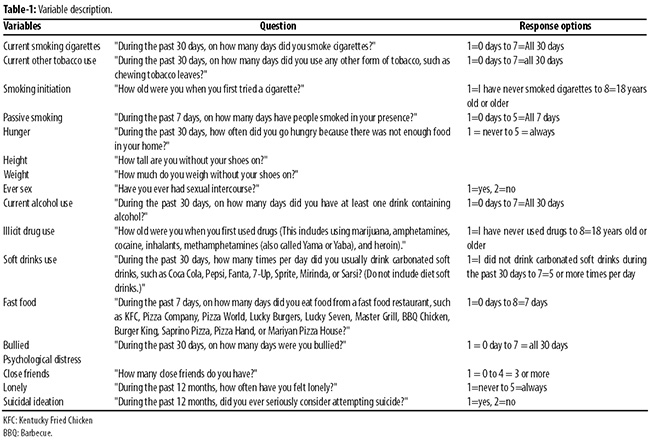 Body weight and height were assessed by self-report. The international age- and gender-specific child body mass index (BMI), calculated as weight/height2 (kg/m2), cut-points were used to define overweight and obesity.16 Adolescents were categorised as overweight or obese if their BMI was > +1 standard deviation (SD) and > +2 SD, respectively, from the median for BMI for age and gender.16 Psychological distress was assessed with three items (no close friends, feeling often or always lonely, and suicidal ideation).
Data was analysed using STATA software version 13 (Stata Corporation, College Station, Texas, the United States). Associations between socio-demographics, risk behaviour and current tobacco use among schoolchildren were evaluated calculating prevalence ratios (PR). Poisson regression estimated the impact of independent variables on current tobacco use (binary dependent variable). Independent variables found significant (p<0.05) in relation to the outcome variable in bivariate analysis were included in the final multivariate model. In the analysis, weighted percentages were reported. The reported sample size reflects the sample that was asked the target question. P<0.05 indicated statistical significance. Both the p-value and the reported 95% confidence intervals were adjusted for the multistage stratified cluster sample design of the study. 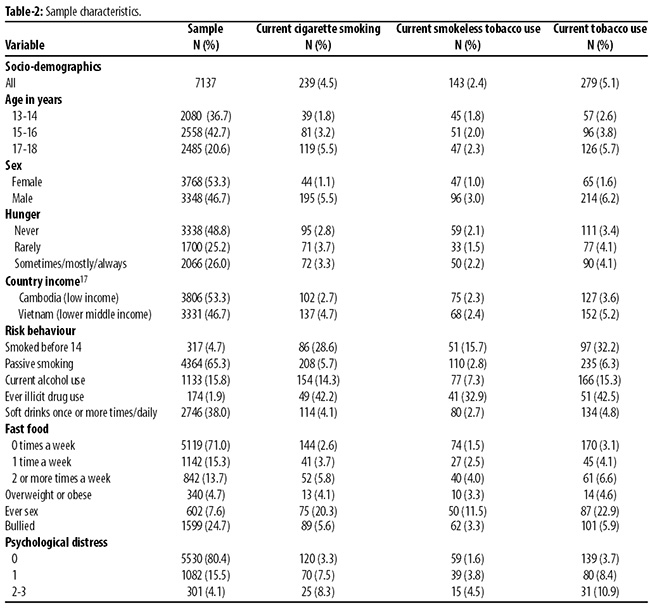 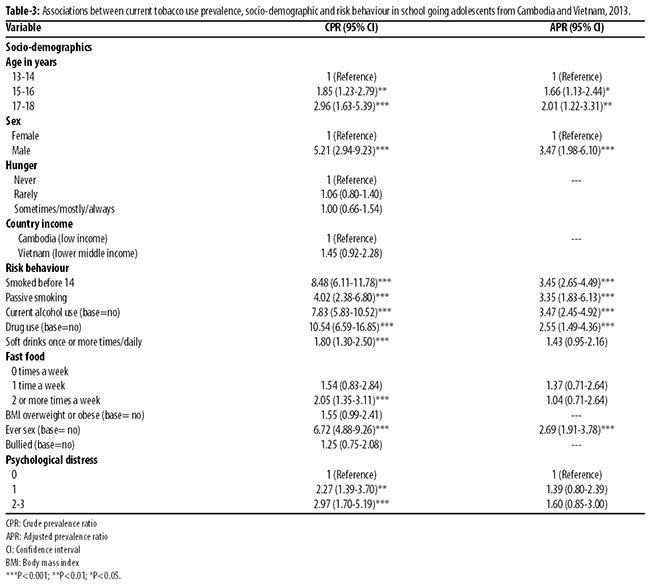 The study investigated in large, nationally representative samples of school-going adolescents in Cambodia and Vietnam the prevalence and correlates of tobacco use. Compared to previous Global Youth Tobacco Surveys (GYTS)3 in Cambodia, the prevalence of current tobacco use among school-going adolescents reduced from 5.1% in 2003, 6.3% in 2010 to 3.8% in 2013, while it increased from 3.8% in 2007 to 5.2% in 2013 in Vietnam.3
It is not clear why tobacco use among adolescents decreased in Cambodia and increased in Vietnam, especially since tobacco control legislation was implemented from 2012 in Vietnam and only from 2015 in Cambodia.4,5 Yet, current tobacco use prevalence rates among adolescents in Cambodia and Vietnam seem to be still lower compared to other ASEAN countries (e.g., Indonesia, Lao PDR, Philippines, Thailand).3,6 A possible reason for the relatively low tobacco use prevalence among adolescents in Cambodia and Vietnam is the "late" initiation of smoking (on average 20 years and more) in the latter countries compared to other ASEAN countries.1 Apart from tobacco control effects during adolescents, Cambodia and Vietnam should strengthen tobacco control efforts during early adulthood.
In agreement with previous studies,6-8 this study found an association between being male and older age and current tobacco use. Having experienced hunger (as a proxy for low socio-economic status) was not associated with tobacco use, as found previously.9 Further, as also observed previously,6,10 this study found strong associations between substance use variables (early initiation of smoking, exposure to passive smoking, current alcohol drinking and illicit drug use) and tobacco use. The high exposure to passive smoking in this study may explain that tobacco use behaviour may be modelled by parents or guardians or others who smoke in the presence of the adolescent.6 In addition, having had sexual intercourse was another risk behaviour, which was found associated with tobacco use, as found in a previous study.10 These two behaviours (having sexual intercourse and tobacco use) can be considered as pointers of a risk-taking lifestyle or sensation-seeking activities.18-20
Unlike in some previous studies,11,12 this study did not find an association between the consumption of soft drinks, fast food and tobacco use in the final model. Psychological distress was in bivariate analysis associated with tobacco use, as found in the previous studies.7,10,14 Unlike in some previous studies,6,14 bullying victimisation was not found to be associated with tobacco use.
Study limitations include the cross-sectional nature of the study, which means one point in time we would have not been able to assess the tobacco use of those students who were absent that day. Moreover, data was collected by self-report, which may have biased the results.

A large number of adolescents in Cambodia and Vietnam used a significant proportion of tobacco. Several socio-demographic and a number of risk factors were identified, which can help guide interventions to prevent tobacco use in this population. In particular, tobacco control programmes should incorporate seemingly clustering other risk behaviours, such as alcohol and illicit drug use and sexual behaviour.

We are grateful to the World Health Organisation (WHO) and the Centres for Disease Control and Prevention for making the data publicly available for this analysis. We also thank the country coordinators from Cambodia (Chher Tepirou) and Vietnam (LE Thi Hoan) for collecting the GSHS data. The ministries of education and health and the study participants in the GSHS in the two ASEAN countries are acknowledged. The governments of the respective study countries and the World Health Organisation did not influence the analysis nor did they have an influence on the decision to publish these findings.