Objective: To determine the frequency of different motivating factors to quit opioid use.
Methods: The descriptive, cross-sectional study was conducted at the Department of Psychiatry and Behavioural Sciences, Jinnah Postgraduate Medical Centre, Karachi, from August 2012 to February 2013, and comprised opioid users. Demographic data was collected through a semi-structured questionnaire whereas motivational factor was assessed through a self-designed proforma. A motivational factor questionnaire was developed after a pilot study. In this questionnaire, different intrinsic and extrinsic factors were categorised into four types, i.e. biological, psychological, social and religious factors. SPSS 17 was used for data analysis.
Results: Of the 157 participants, 148(94.3%) were males and 9(5.7%) were females. The overall mean age was 31.83±8.99 years (range: 14-57 years). The mean age of onset of using opioids was 25.79±7.17 years (range: 13-40 years). The mean duration of using opioids was 5.29±3.72 years (range: 1-20 years). Besides, 141(90%) patients were under the age of 45 years. Strong social factors included feeling of inability to care for family among 122(77.7%) participants, embarrassment in society 107(68.2%), and family pressure by parents/ spouse/ children 94(59.9%).
Conclusion: Family and social factors were found to be the main source of motivation for a person to quit substance abuse.
Keywords: Motivating factors, Opioids, Treatment seekers. (JPMA 67: 1050; 2017)

Opioid addiction is a chronic relapse reemitting disorder which affects higher mental functions of brain, including psychological and social.1 With the changing pattern in substances, especially opioid use, service providers are facing many challenges in treatment.2 According to a report released by the United Nations Drug Control Programme, approximately 15.6 million of the world population uses some form of illicit opioids, of which 11 million use heroin.3 The situation is similar in Pakistan where out of the 1 million opioid users 0.8 million (or 80%) are heroin users.4 The previous report by the United Nations Drug Control Programme stated Pakistan as among the worst affected countries by substance use in the world.5 Most of the substances used including opioids have significant harmful effect on physical as well as on mental health. These effects may present in the form of changes in mood, perception and thoughts.6 The rapid increase in substance users poses an immense threat to the future of the country.2,7
In addition to pharmacological treatment, motivation should be the focus. Unfortunately, this is missing from the treatment regimen, leading to high relapse rate.8 Recovery from addiction is a long process that requires time, commitment, motivation and support. It has been observed that opioid users who do not enter treatment regimen are poorly motivated or unmotivated.9 The first step in treatment is to decide to make a change. Opioid use must be treated before the development of full dependency and in order to achieve this, motivation is the essential step.10 Studies have shown that motivation has a better result on treatment outcome. If a person with proper motivation to give up is managed, the long-term effects are positive.11 Therefore, this study is aimed at determining different motivational factor for quitting opioid use to accomplish bio-psychosocial model of treatment. The current study was planned to determine the frequency of different motivating factors to quit opioid use.

This descriptive, cross-sectional study was conducted at the Department of Psychiatry and Behavioural Sciences, Jinnah Postgraduate Medical Centre (JPMC), Karachi, from August 2012 to February 2013, and comprised opioid users. The department has specialised substance use clinic which operates twice a week with inpatient facility for psychiatric disorders, including substance use. The sample size was calculated by cross sectional study formula t2 p (1 - p) / m2. The approval was taken by ethics review committee. The patients fulfilling the dependency criteria of opioids were included in study. The dependency was judged through International Classification of Diseases (ICD)-10 criteria of substance dependence.12 The patients who were consuming substances other than opioids and those having organic brain disorder such as dementia were excluded from the study.
Informed consent was obtained from all participants and they were assured of confidentially. In case of minors, consent was taken from parents. A semi-structured questionnaire containing demographic data was administrated. The proforma to assess motivational factors was a self-structured questionnaire which had been modified from McBride questionnaire and adopted according to local population.9 The components after pilot study were incorporated into the proforma. The proforma was reviewed by a team of psychiatrists and psychologists and pretested among local population. In this questionnaire, motivational factors were divided into four types by combining different intrinsic and extrinsic factors. The four types were biological, psychological, social and religious factors. These four types which motivated the opioid users for quitting were evaluated in three categories. These were strong factors (found prevalent in >50% opioid users), mediocre factors (25-49%) and weak factors (<25%). SPSS 17 was used for data analysis. Clinical characteristics were summarised in terms of frequencies and percentages for variables (for example marital status, education, type of opioid use). Mean and standard deviation was computed for quantitative variables (for example age, duration of opioid use, age of onset). 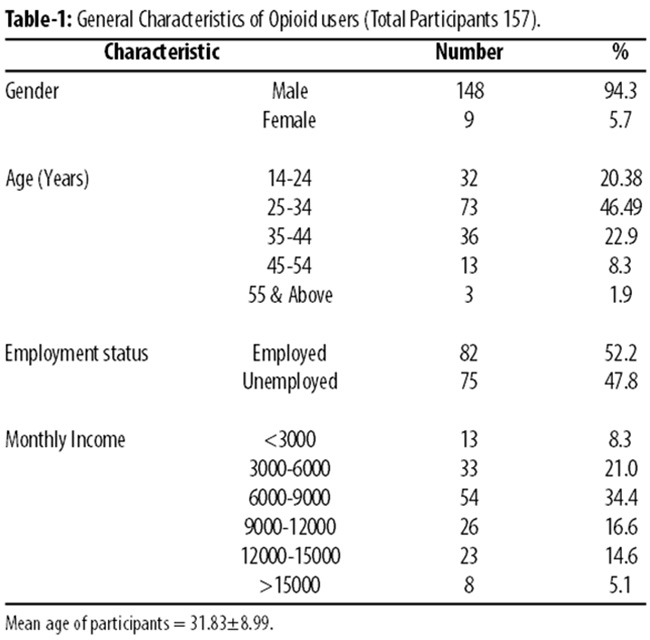 Strong social factors included feeling of inability to care for family among 122(77.7%) participants, embarrassment in the society 107(68.2%) participants, and family pressure by parents/ spouse/ children 94(59.9%). Among strong psychological factors, feeling of guilt 119(75.8%) and fear of harm to family reputation 113(72%) were evaluated. Strong physical factor to quit opioid use was inability to tolerate withdrawal symptoms which was observed in 100(63.7%) participants. Religious motivation 99(63.1%) was also strong motivating factor for quitting the opioid addiction (Table-2). 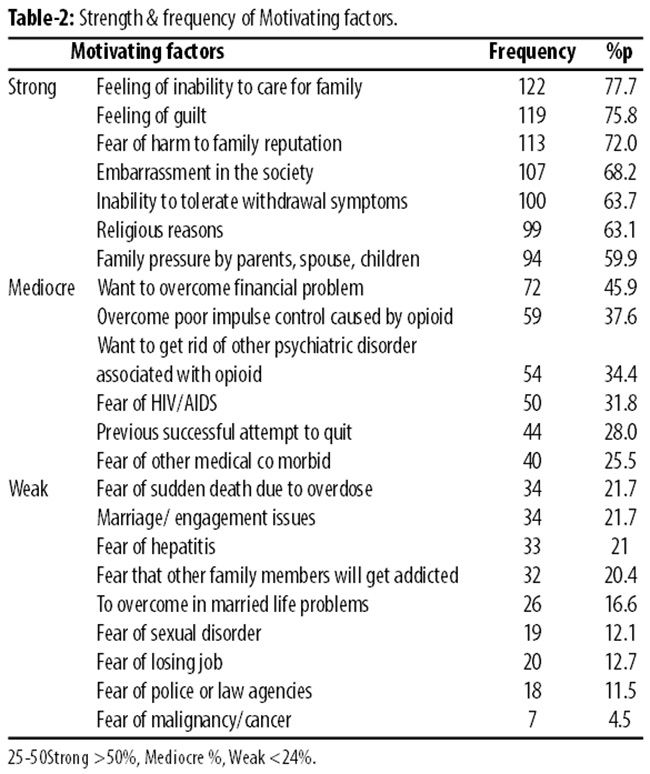 Motivation is a very important and basic pillar of bio-psychosocial treatment model of drug and opioid addiction. Low motivation is often the explanation for poor outcomes in treatment, including the lack of engagement in treatment or lack of reduction in opioid usage. Dropout from treatment centres has strong relation with readiness to change.13 The less motivated patients often have difficulty in engaging the opioid treatment process.14 In addition to engagement, even treatment strategies work better in those patients who are highly motivated as compared to those who are less or not motivated.15 Therefore, motivation factors are real-life cues that can urge and force a substance addict to go for and adhere more rigidly to treatment of opioids. These motivating factors may include personal reasons, disease-related fears, family bondages and pressures, societal and legal issues and religious affiliations.16
In our study, motivational factors were the reasons which have had pushed/stimulated the patients to take the decision for quitting their addiction. These four types of factors (biological, psychological, social, religious) which motivated the opioid users for quitting were evaluated in three categories. These were strong factors (found prevalent in >50% opioid users), mediocre factors (25-49%) and week factors (<25%).
Strong motivating factors were related to caring for family, family reputation, feeling of guilt, embarrassment in the society, family pressure, intolerance of withdrawal symptoms and religious affiliations. Similar findings were reported by Copersino who found that self and social image were the main motivating factors to quit substance.9 Our results were in contrast to a study conducted by Smith in which he found that in comparison to interpersonal reasons, intrapersonal reasons were the main source for quitting drugs, whereas in our study two out of three top reasons for quitting were interpersonal and related to family care.17 The reason behind this may be that people in eastern countries, especially those in South Asia, have strong family bonding as compared to western countries.
Previous successful attempts to quit, fear of human immunodeficiency virus infection and acquired immune deficiency syndrome (HIV/AIDS), psychiatric disorders and fear of other medical co-morbids were mediocre motivators. These findings of health concern has somewhat resemblance with a study conducted by Chauchard on marijuana users which concluded that self-image, health concerns and interpersonal relationship concerns were associated with greater likelihood of abstinence at the study interview.18 Our results show that fear of HIV/AIDS in quitting opioids was counted as 31%. Saeed Farooq et al. in their study conducted a few years back on opioid users found that only 17% participants wanted to quit opioid because of fear of HIV and hepatitis.5 The reason behind this may be that knowledge and fear of complications secondary to substance use is increasing day by day in these users and they are scared more because of their health concerns.
Opioid users were bothered very less by getting hepatitis B, fear of sudden death, losing job, involvement with police or law agencies and fear of malignancy/cancer. In contrast, Blanchard et al. in their study found that legal pressure was strongly associated as motivational factor for quitting the drugs and readiness for treatment.19 This may be due to obvious reason that in western countries legal system is more stabilised and strict for drug addiction than developing countries like Pakistan. However, the findings of Caprasino and others were the same as those of our study for legal pressure as they found that 13% wanted to quit because of legal pressure.9
In this study, a few intrinsic factors or factors concerned to one self, such as feeling of embarrassment, were more marked than extrinsic factors, such as legal pressure or fear of HIV, hepatitis or malignancy. Similar findings were reported in a study by McBride et al. in which they divided motivational factors into four categories.20,21 These were self-concern, health concern, social influence and legal issues. They found that self-concern was more predominant than the social influences. On the basis of these factors, McBride developed the scales of motivation dividing the motivational factor into four domains mentioned above. The finding of this study has somewhat moderate similarities with the study conducted by Weiner et al. in which they found that strong factors for quitting substance use included avoiding legal pressure, obtaining job, preventing vocational problem, avoiding guilt, avoiding family problems and avoiding positive drug test.22
At present, many detoxification programmes are running in Pakistan (in private as well public sector). But the number of patients who quit opioid use is not encouraging enough. This may be due to the reason that very limited research is done on motivational factors. The current study has tried to investigate and understand such factors. If these factors are considered before applying psychological intervention, like motivational enhance therapy, contingency management or others, then these results should be considered significant and encouraging. However, as this study was limited to public sector hospital and included limited number of cases, therefore it is recommended that similar studies on larger scale and involving multiple private and public sector centres must be done to increase the validity of these factors.

Our findings were in consistent with social theory which suggests that the human behaviour is influenced by people around him/her and its social context. This highlights the importance of high percentage of family and religious factors in our study which may help patients to refrain from opioids. Counting motivational factors to quit is one of the true explanations of bio-psychosocial model of substance use treatment. These factors in individuals may help in appropriate assessment-cum- therapeutic strategies to reduce social burden posed by this menace. Therefore, it is recommended that motivational factors should be properly assessed while inducting the patient in treatment so that proper holistic model of treatment may be accomplished.