Hydrogen sulfide gas poisoning in fish garbage room: A report of a fisherman

We report the case of a fisherman who was exposed to high concentrations of hydrogen sulfide (H2S) gas from the fish garbage room. The patient survived and was discharged with full recovery from the hospital. H2S is a colourless, foul smelling and highly toxic gas next to carbon monoxide, which causes inhalation death. It is a by-product of various industrial processes particularly involves exposure from agriculture, petrochemical industry and organic matter decomposition from sewage processing. It is a by-product of H2S has been referred as the "knock down gas" because inhalation of high concentrations can cause immediate loss of consciousness and death. Although early use of amyl nitrate and hyperbaric oxygen shows some benefit in literature, supportive care remains the mainstay of treatment. Emergency physicians and pre-hospital care personnel are not very familiar with such exposure due to its rarity. This becomes more relevant in the developing world settings where there are rising concerns about the unsafe exposure to hazardous chemicals and its impact on human health. Emergency physicians working in Pakistan should be aware of this entity especially in regard to fishermen presenting to the Emergency Department with such a clinical presentation and its toxic manifestations. This incident also illustrates the need of enforcement of health and safety regulations in the fishing industry.
Keywords: Hydrogen sulfide toxicity; fishermen; toxicology; inhalation exposure

"A sarcophagus where asphyxia opens its claws in the filth and clutches you by the throat . . . " - Victor Hugo
It was this smell of H2S that established the diagnosis in this case report. H2S is a readily water-soluble gas, which at higher concentrations becomes toxic by binding to and inhibiting cytochrome C oxidase in complex IV of the electron transport chain, the last complex in the chain prior to ATP synthesis. It is a major occupational hazard and even little exposure could cause long-term neurologic deficits. Case reports in the literature showed intentional use of household chemicals to create H2S as a means of committing suicide and pose health hazard for the rescuers.1 H2 S is famous due to its immediate knock down effect that leads to multiple victims including those who attempt to rescue victims. Its characteristic rotten eggs odour is quickly lost due to paralysis of olfactory receptors and could deceive the healthcare provider of its presence. We present a case caused by H2S produced by bacterial decay of fish.It is important that emergency physicians and Emergency Medical Service (EMS) providers should be aware of its exposure to avoid risk to them and use effective method to salvage patient as timely treatment affects outcome.

A 40-year old fisherman presented to the Emergency Department (ED) of the Aga Khan University Hospital, Karachi with history of sudden loss of consciousness after entering the fish garbage room. Two coworkers who came to rescue him became unconscious too. The remaining coworkers were able to take themselves out of the site and called for help. They were later transferred to the local trauma center (estimated exposure time: 10 min). The one who got exposed first was referred to our hospital. He presented to the ED with altered mental status. There was no shortness of breath, chest pain or seizure. He had a GlasgowComa Scale score (GCS) of 7, and initial vital signs were as follows: blood pressure, 114/70 mm Hg; pulse, 86/min; respiratory rate, 25 breaths/min; temperature, 97.0°F; and arterial oxygen saturation (SaO2), 95% on room air. Physical examination demonstrated harsh vesicular breathing and coarse crepitations bilaterally. An initial chest radiograph demonstrated bilateral upper lobe opacities suggestive of aspiration pneumonitis or early pulmonaryedema. Electrocardiogram demonstrated sinustachycardia at 110 beats per minute with hyper-acute T waves. Results of laboratory investigations are shown in Table. 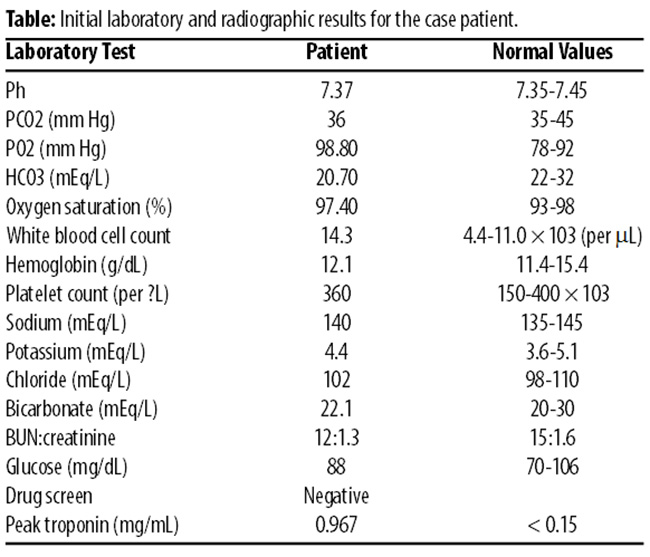 Diagnosis was made as H2S intoxication secondary to fish decay and supportive management was planned keeping in mind that gas effect should clear on its own. Intensive care unit team was involved for the evaluation for any further drop in GCS and potential intubation. He was started on broad-spectrum antibiotics for aspiration pneumonia. The patient was subsequently transferred to the in-patient monitored bed. He continued to be agitated and was unable to follow commands until hospital day 1. On hospital day 2, the patient complained of dizziness and headache but all symptoms subsequently resolved. A repeat chest radiograph demonstrated clear lung fields. The patient\\\'s mental status continued to improve and returned to baseline by the end of hospital day 3. The patient was discharged on hospital day 3 without residual complaints or neurologic deficits on follow up visits.

This case highlights that toxicological exposure awareness, occupational and environment safety is generally lacking in our country. Neither the fisherman nor the rescuers were aware of this toxic exposure risk at their work place. This puts more responsibility on EMS and emergency physicians who should be able to recognize this and provide immediate life support measures. Our emergency physicians in consultation with medical toxicologist promptly diagnosed the case and provided life support measures resulting in good outcome. It is recommended that H2Spoisoning should be suspected when victim rapidly loses consciousness, exposure to gas with smell of rotten eggs, exposure to enclosed space like sewer manure pit or garbage room and lastly when multiple casualties present with sudden death or loss of consciousness.2 This poisoning should also be suspected in suicide cases where a sulfur source (bath sulfur, pesticide) is mixed with toilet bowl cleaner to produce H2S leading to the terms \\\'detergent suicides\\\' and \\\'chemical suicides\\\'. Incidences of using H2 S to commit suicide were reported in Japan in first half of 2008 that was later facilitated by instructions on the Internet, more cases started to report in the US.
H2S acts as a pulmonary irritant and a cellular poison producing fatal effects by a mechanism identical to that for cyanide poisoning. However, H2S\\\'s spontaneous dissociation from the mitochondrial cytochrome complex IV is fast enough to allow many patients to survive after brief exposure.4 H2S inhibits mitochondrial cytochrome c oxidase that paralyzes the electron transport system, prevents oxygen cellular utilization and interferes with oxygen transport system by binding with haemoglobin.4 These mechanisms cause anaerobic metabolism and lactate accumulation.
Our patient presented with altered mental status and had infiltrates on chest X-ray and was found to have positive cardiac troponin I. These are the most commonly involved organs in this poisoning. Primary target organs are the central nervous and respiratory systems. Neurologic manifestations range from headache, lateralizing motor signs, seizures, somnolence, agitation, vertigo, sudden loss of consciousness (knock down phenomenon) and return to consciousness on fresh air exposure to coma. Respiratory manifestations are local irritation, cough, cyanosis, apnoea and pulmonary odema (copious frothy bloody secretions). Cardiovascular manifestations range from hypotension, tachycardia, bradycardia, ischaemia, myocardial infarction, and cardiac arrest, usually from prolonged hypoxia.4,5 Our patient had elevation in troponin I (peak troponin, 0.967 mg/mL). This was thought to be due to demand ischaemia, possibly from his elevated heart rate and the anoxic effects of the H2S gas on the heart. Other manifestations reported in the literature include nausea, vomiting, keratoconjunctivitis, blurred vision, photophobia, blepharospasm, and lacrimation.4 In lethal H2S exposure, sulfides act on the respiratory centers of the brain causing respiratory paralysis.
We managed our patient with oxygen and supportive care that resulted in good outcome. Literature also recommended initial focus on airway, oxygenation and supportive treatment. It is recommended to remove the victim immediately from the contaminated site and removal of clothing as an early decontamination measure. Rescuers are also required to take protective barrier measures such as self-contained breathing apparatus to avoid H2S exposure through skin and mucous membranes. 100% oxygen in conscious patients and early airway control with intubation is required in unconscious patients. IV fluids and vasopressors should be administered to hypotensive patients. Correction of acidosis based on arterial blood gas and serum lactate values is indicated. Use of bronchodilators is required for patients with bronchospasm. Seizures control with benzodiazepines or phenobarbitals should be considered.
The similar toxic mechanism of cyanide and H2S has supported the use of nitrite as antidote. A cyanide kit should contain amyl nitrate, sodium nitrite, and sodium thiosulfate. Amyl nitrate is a pill that must be crushed and inhaled every 30 minutes; it produces sulfmethemoglobin and can be used even if intravenous access has not been obtained. Prompt administration of 3% sodium nitrite is supported by a few anecdotal reports.3 Nitrites effectively induce methaemoglobinaemia and the resultant ferricheme has a greater affinity for H2S than cytochrome-coxidase, thereby freeing cytochrome-c oxidase and allowing aerobic metabolism to resume.4 The recommended dose of sodium nitrite is 0.12 to 0.33 mg/kg in children and 300 mg in adults.4 Sodium thiosulfate is used to treat cyanide toxicity, but not H2S toxicity.4 It is recommended that patient with H2S poisoning who presents with altered mental status, coma, hypotension and dysrhythmia should receive sodium nitrite.4 Animal models have also suggested a beneficial effect of hydroxycobalamine. We could not use these antidotes due to unavailability. We recommend that poison control center and ED should keep these antidotes for patients with suspected cyanide and H2S poisoning.

We believe this is the first reported case of a patient with H2S exposure in Pakistan who experienced full recovery without neurologic complications; hence true incidence is not known. H2S inhalation can be life threatening. The exposure of toxic gas can originate from unexpected sources such as from fish garbage room in this instance. This case highlighted the importance of making diagnosis of H2S poisoning to take timely measures. Supporting diagnostic features were fish load in garbage room, foul smell at the scene, and rapid loss of consciousness. Treatment remains mainly supportive. Awareness of the toxic clinical effects of H2S as well as its more frequent occurrence in fishermen will be diagnostically useful in similar exposure presenting to ED.
Disclaimer: None.
Conflict of Interest: None.
Funding Disclosure: None.
Consent: The consent of the patient was taken prior to the writing of the manuscript.