Pelvic Organ Prolapse (POP) is defined as the prolapse of the pelvic organs toward or through the vaginal opening as a result of the weakening of the combination of nerves, muscles and fascia, which normally protect and support the physical position of pelvic organs. In this case report, the 30-year old patient who applied with the pelvic prolapse through the vaginal opening was treated with Sacro Uterine Ligamentopexy and anterior 6 arms mesh implant, without applying hysterectomy. In the short follow-up period of three months, both anatomic improvement and positive developments in sexual and social life have been recorded in the patient\\\'s life. In conclusion, we determined that six arms mesh implant organ preserving approach is functional, safe and effective for young women at reproductive age.
Keywords: Mesh application, Pelvic Prolapse, Urinary Incontinence.

Pelvic Organ Prolapse (POP) is defined as the prolapse of the pelvic organs toward or through the vaginal opening as a result of the weakening of the combination of nerves, muscles and fascia, which normally protect and support the physical position of pelvic organs.1
Pelvic organ prolapse is seen in more than 40% of women, and its prevalence increases with increased life expectancy. Thirty percent of women between 5th and 9th decades apply to clinics for pelvic floor dysfunction. Its lifetime surgical repair proportion is 11% and approximately 1/3 of them requires another surgical procedure.2
Etiology of POP is not fully understood yet. Some risk factors include delivery, congenital factors, iatrogenic factors, obesity, increased intra-abdominal pressure, or chronic respiratory diseases. It is also claimed to cause endopelvic fascia and connective tissue injuries due to forcing or stretching during delivery. Degeneration of pelvic floor due to delivery also contributes to prolapse. As to the congenital factor, abnormal collagen metabolism is reported to cause prolapse.3
Treatment of POP depends on its severity and level, the patient\\\'s symptoms and expectations from the treatment, age, desire for pregnancy, medical diseases, previous surgeries, and the surgeon\\\'s experience.4 According to the Recommendations of Fourth International Consultation on Continence, POP treatment should be applied only to symptomatic patients.5
Various methods are available in the surgical treatment of POP. The purpose of surgical treatment is to maintain normal pelvic anatomy, to normalize urinary and bowel functions, to improve sexual functions, to decrease the effects of symptoms, and to improve the quality of life.6
The purpose of the case report is to perform organ-preserving surgery instead of hysterectomy in a young patient with total pelvic organ prolapse who desired fertility. This technique aimed to provide both anatomic and functional recovery.

A thirty year-old patient was admitted to the Gynaecology Clinic in Special Metro Hospital, Adana, Turkey in May 2016 with a mass protruding out of the vagina. Her features were gravida 2, parity 2 abortion none. She had no history of any chronic disease or medicine intake. She had a normal spontaneous vaginal delivery 10 months ago. On examination, she was found to have total pelvic prolapse (Figure-1A) 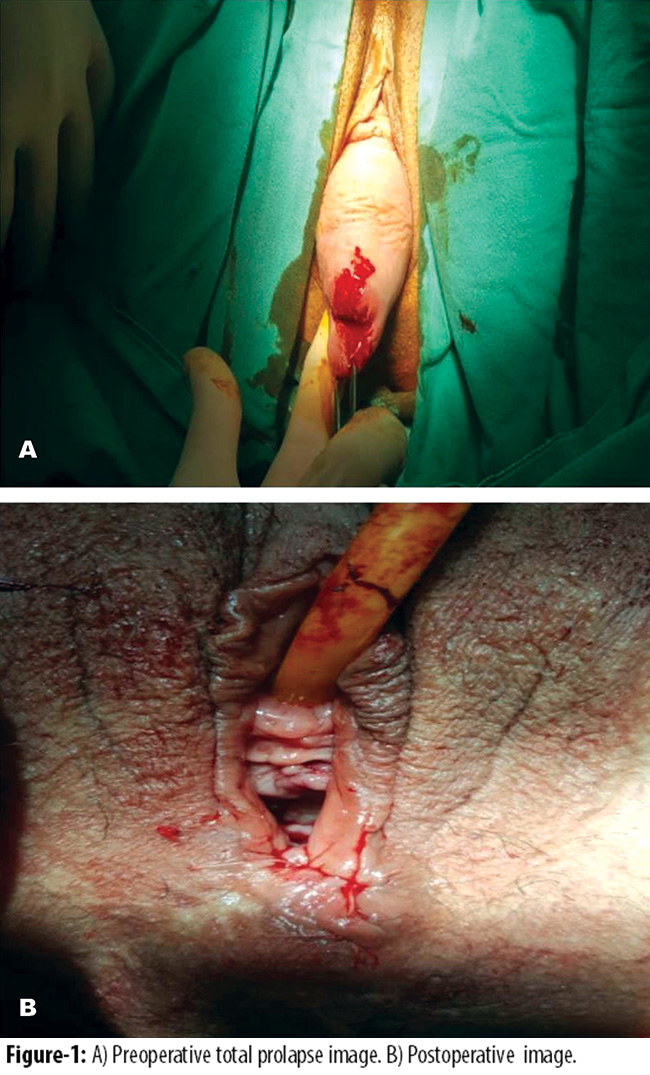 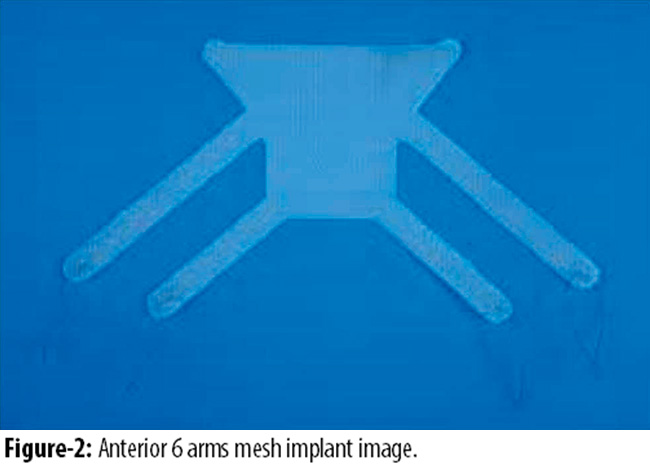 anterior 6 arms mesh implant Sacro Uterine Ligamentopexy +posterior large segment vaginal enterocoele repair + levator ani fixation with perineoplasty operation in order to compensate anterior pelvic organ prolapse and vesicovaginal fascia defect.
Three-month follow ups indicated that the patient was happy with cosmetic and functional outcomes and her sexual life improved, which was identified objectively through sexual function index. The index indicates a functional disorder if the score is 26 or below. Our patient\\\'s preoperative female sexual function index was found to be 23; and that of postoperative was found 33.

The patient was placed in the lithotomy position under spinal anaesthesia; a linear incision was performed on the vaginal anterior wall, from the 2.5 cm below the urethra, and bladder was dissected from vaginal mucosa through the uterus. Vesicovaginal ligaments were retracted and bladder was completely dissected from vaginal fascia. Two proximal arms of the mesh was passed with a guide externally, using six arms mesh, the two distal parts were passed through the obturator foramen, put in a way to encompass midurethra and bladder wall externally. Posterior fringes were fixated to both cardinals and sacro uterine ligaments were fixated to bilateral sacrospinous ligament, using suturing Guide (Capioslim Boston Scientific). Then six arms anterior mesh implant and sacro utero ligamentopexy was performed. Posterior mesh arms were fixed at the skin level by performing traction, anterior part was not fixed at the midurethra and skin level, and tension-free placement was performed. Vaginal mucosa up to bladder floor was sutured in a continuous locking fashion with no: 2/0 vicryl suture. In the same session, rectovaginal fascia dissection was performed from posterior vagina, and grade IV posterior prolapse was dissected broadly up to the apical region. Fascial defect was repaired with no:2/0 vicryl suture, and a purche suture was placed, then posterior repair was performed by excising the tissue in the shape of a wide lambda. A horizontal dissection was made on the perineum, levator ani muscle was held from bilateral pararectal region, and perineoplasty was performed by enhancing puborectal muscle (levator ani) medial part fixation. Cleaning and haemostasis were confirmed and the operation was completed by placing two tampons in the vagina. Postoperative image is shown in Figure-1B.

POP is frequently asymptomatic, but sometimes it causes such symptoms as vaginal bleeding, pelvic pain, posterior or lower abdominal pain, constipation, heaviness in the genital system and urinary symptoms. These symptoms cause negative psychological, social, and sexual effects in patients. With urinary system infections and renal function disorders, it could also have adverse effects on health.2
POP and urinary incontinence are both common complaints and may frequently coexist in the same patient. Rozenweig et al. found that 60% of the women who had severe pelvic organ prolapse but did not have prominent urinary incontinence symptoms had latent urinary incontinence on urodynamic examination.7 Although it is reported in studies, no incontinence that could develop following preoperative and postoperative anatomic recovery was reported in our case.
Anterior vaginal wall defect is defined as descent of the anterior vagina so that the ureterovesical junction or any other point on the anterior vaginal wall is less than 3 cm from the hymenal ring.
These defects not only develop in fascia as a result of forcing or stretching, but specific damages in the support structures of the anterior wall could also cause anterior wall defects. Anterior wall defects are common and the most frequently encountered recurrences happen after surgery.
Mesh applications were first used vaginally by Julian et al. in 1996; and recurrence rates and complications were found to be significantly less.8 Successive studies also increased the place and importance of meshes in POP surgery.9-11
Surgical methods include vaginal approach, open or laparoscopic surgery and abdominal approach. The standard method used in the world for the surgical treatment of POP is hysterectomy. In fact, descensus uteri is the result of pelvic organ prolapse, it is not the cause. Therefore, performing only hysterectomy for the POP surgery is insufficient in eliminating the deficiencies in pelvic support that cause POP.12
In comparison to menorrhagia and chronic pelvic pain, risk of future apical prolapse is six times more in hysterectomies performed due to POP indication. Various surgical methods and pelvic floor defects repair should be added to the hysterectomy performed due to POP so that apical prolapse can be prevented. Recently, other factors have also gained importance in urogynaecology practices. There have been important changes in women\\\'s lives and their beliefs about sexual functions and pregnancy. Nowadays, most women do not lean towards hysterectomy and prefer preserving the uterus.13,14
Uterus-preserving POP surgery has been investigated and implemented since 1990s. Advantages of preserving the uterus include maintaining pelvic anatomy, decreasing intraoperative blood loss, shortening duration of surgery and hospital stay, decreasing mesh erosion rate, and increasing the patient\\\'s self-confidence and sexual functions.15
In their multi-centered study conducted on 213 women, Korbly et al. investigated uterus-preserving or hysterectomy preferences of women who attended the urogynaecology clinic due to pelvic organ prolapse. When they were told that the treatment outcomes were similar, 36% of the women preferred preserving their uterus. When the uterus preserving surgery was considered superior, 46% of the women opted to keep the uterus. When hysterectomy was taken as superior, only 21% of the women preferred hysterectomy. The study showed that there was an increase in the uterus preserving approach with on increased education level.16 On the other hand, according to a number of questionnaire results published by the same team, 47.4% of the women stated that uterus was not important for sexuality and hysterectomy would not make them feel less feminine.17 As the uterus is important for a woman\\\'s perceptions and sexual functions, uterus-preserving approach should be provided to selected patients, particularly to those who see hysterectomy as a loss. Our case reported positive changes in her sexual life, which was measured objectively via sexual function index.
Although the anatomic reconstruction surgery applied to the patient makes her social life positive, there can be some complications. In their study on the recovery of pelvic organ prolapse with mesh, Lin et al. reported that there were minor complications except for mesh erosion and they were at an acceptable level.18 In contrast to abdominal approach, major organ and vascular structural damage risk is lower and duration of hospitalization is shorter in the vaginal approach. The returning to daily life activities is also short. Alternatives to this surgery are an abdominal operation with or without mesh or conventional colporraphy operations without mesh, but their recurrence rate is high. The most common mesh complication is mesh extrusion, which creates a foreign object image; and the vaginal mucosa that is opened without taking out mesh is closed primarily. Surgical removal is needed in case of erosion. Carey et al compared vaginal repair augmented by mesh and without mesh colporrhaphy operation. They reported that vaginal mesh exposure was seen in 5,6% proportion as postoperative complications. Three of the mesh exposure cases were treated surgically by simple excision of the exposed mesh.19 This case did not have any serious complications in her first and third months follow-ups, the most frequent complaint was inguinal pain. The symptoms improved with a one-week physical treatment exercise programme.
Presently a subjective success is considered more important than anatomic outcome for patient satisfaction in the surgery of pelvic organ prolapse. Hence, a randomized study on the superiority of mesh outcomes in comparison to traditional surgery was reanalyzed in terms of subjective success, and it was found that the two methods were not superior to each other.20,21
The present study showed that treatment outcome of six arms anterior mesh implant with sacro utero ligamentopexy, on a young patient in the reproductive period with pelvic organ prolapse and requiring organ preserving surgery, enabled anatomic recovery and satisfying outcomes. In conclusion, despite the short follow-up period, we determined that six arms mesh implant organ preserving approach provides a functional, safe and sexually effective surgery for young women in the reproductive age.
It is evident that for more comprehensive outcomes, patients\\\' long-term follow up findings should be evaluated; and future studies should involve more participants and longer periods of time.
Disclaimer: None Declared.
Conflict of Interest: None Declared.
Funding Disclosure: None declared.

Hydrogen sulfide gas poisoning in fish garbage room: A report of a fisherman