Effect of pregnancy on growth of intracranial meningiomas

Meningiomas are the most common benign primary intracranial tumours in adults. Their rapid growth during pregnancy has been well reported. Moreover, the relationship of increased progesterone expression during pregnancy and extensive tumour growth has been debated. In this review, we discuss not only the effect of progesterone on meningiomal growth but also other mechanisms involved in gestational meningiomas.
Keywords: Meningioma, Pregnancy, progesterone, prolactin, estrogen

Meningiomas are the most common primary intracranial tumours, representing one-third of all intracranial tumours in adults. 1 A higher incidence is observed in women as compared to men. 2 According to a recent review article, the incidence of meningiomas in pregnancy is 5.6 in 100,000 pregnant women. 3 This low incidence is noted because the range of fertility is approximately 15-45 years of age whereas meningiomas more frequently present in in 6-7th decade of life.Although meningiomas are usually slow-growing, they can exhibit aggressive characteristics during pregnancy. 4 A possible explanation for aggressive growth during gestation can be the changes in female sex hormones. In this review, the authors summarize the evidence exploring the association between pregnancy and meningioma growth.

We reviewed articles on Pubmed describing the effect of pregnancy on meningioma growth and the pathogenesis by which this occurs. The earliest literature on tumours in pregnancy was published by Barnard in 1898. 5 One of the initial papers discussing meningiomas in pregnancy was a case report, published in 1929 by Cushing and Eisenhardt, on a pregnant woman with parasellar meningioma. They reported rapid progression of visual impairment which was reversible post-partum and recurred in the next pregnancy. 6 Smith et al., in 2005 published a sex steroid and growth factor profile of a meningioma associated with pregnancy, and showed significant expression of progesterone receptor (PR), platelet-derived growth factor receptor B (PDGFRB), fibroblastic growth factor receptor 2 (FGFR-2), whereas, no significant expression of estrogen receptor (ER), epidermal growth factor receptor (EGFR) and human placental lactogen (hPL) was seen. 7 Hatibogluet al., in 2008 described three patients with meningioma who presented in their post-partum period .Immunohistochemistry of their resected tumours showed increased expression of not only PR, but also EGFR expression. 8 Kerschbaumeret al., in a recent case report showed regression of a gestational meningioma in the post-partum period, that also supports the idea of the hormone-sensitive nature of these tumours. Interestingly, histopathology of the resected tumour also showed more than 90% PR expression, thereby showing the effect of increasing levels of progesterone in pregnancy on the rapid growth of meningiomas. 9 In contrast to this, an article in 2012 studied 17 clinicopathological cases of meningiomas in pregnancy. They  reported that all but two tumours had extensive PR expression whereas only one had minimal estrogen expression. However, PR expression was also similar in the specimen from the control group. Hence, it was unlikely that progesterone alone explained meningioma growth during pregnancy. Their case series also provided evidence against cellular proliferation as a factor in accelerated tumour growth. Furthermore, they found five cases in which there was tumoural hypervascularity, edema, and haemorrhage/necrosis, which suggested that haemodynamic changes could also potentially explain the rapid tumour growth during pregnancy and its postpartum regression. 10 An article in 2017 also reviewed these two cardinal mechanisms behind the pathogenesis of meningioma growth in pregnancies, which are: endocrine and vascular. According to them, high level of progesterone and the presence of increased vascularity and intra- or extracellular oedema are responsible for the aggressive nature of gestational meningiomas. However, progesterone receptor is expressed not only in meningiomas of females but also in those of males and children. Moreover, the peak incidence of meningiomas is far beyond the fertile age when the serum level of progesterone is relatively low. Furthermore, the reversible nature of haemodynamic changes i.e. the regression of the tumour after childbirth, suggests that it plays a role in tumour growth. However, these changes are not always present in gestational meningiomas. Hence, they concluded that endocrine and vascular mechanisms do not act independently. Rather, both are responsible for the unusual behaviour of gestational meningiomas. 4 Lavivet al., published a comprehensive review of clinical cases of intracranial meningiomas and looked at the potential factors involved in the pathogenesis of meningioma growth during pregnancy. They theorized  that the pathogenesis involved a pituitary-related hormone, and that is responsible for the rapid growth of meningiomas in pregnancy. 11 This was based on the observation that most cases had meningiomas in the parasellar location and there was a significant association with the internal carotid artery for vascular supply. 11 They proposed prolactin as the hormone that acts as the key contributor for the rapid growth (and shrinkage) of meningiomas during pregnancy because it not only fits the above description but it also composes osmoregulation capabilities that influence the tumour size in a reversible manner. 11 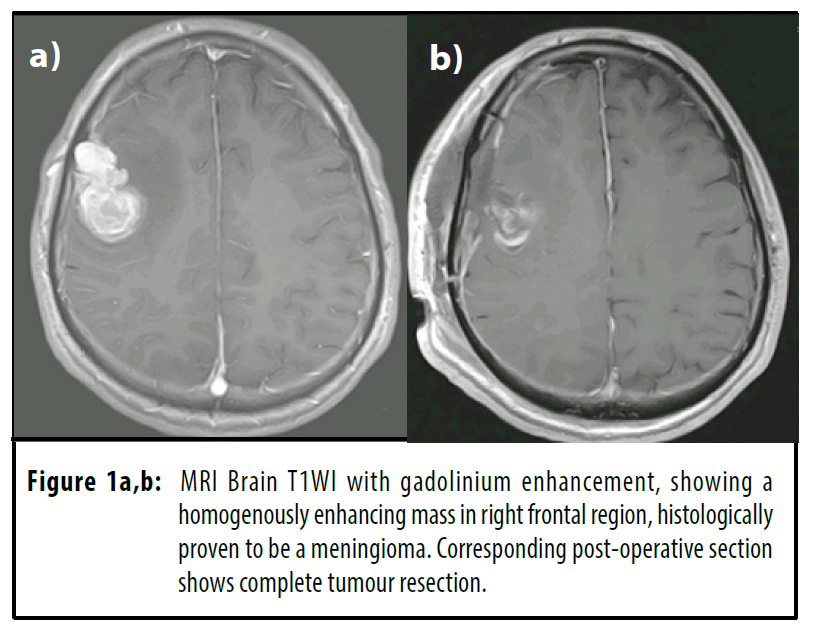