Glioblastoma remains the most common primary central nervous system malignancy with poor outcomes despite standard of care treatment. The extent of resection of these tumours dictates prognosis and outcome. This has been demonstrated by several studies over a period of many years.1 Several follow up studies have linked removal of the enhancing part of the tumour with survival. In cases where total removal is not possible, the volume of the remaining enhancing tumour is correlated with survival. 2  Further care of these patients is decided upon post-operative imaging to assess residual disease. Over time there has been consensus to acquire this imaging within a 72 hour post-operative window because after this time there is development of benign contrast enhancement that can be confused with residual disease. 3  Herein, the authors review the existing literature on the optimal timing of post-operative MRI after glioma surgery. 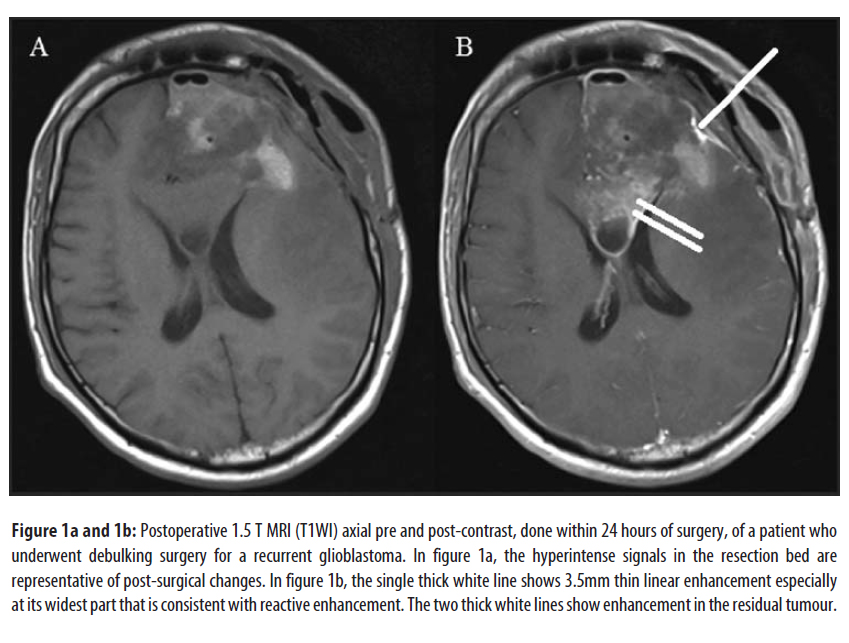 In the late 1970s and early 1980s, the debate of whether extent of resection influences outcomes in patients with glioblastomas was raging. Several studies had failed to demonstrate any improved outcome with more radical excision versus biopsy. However, several other authors described improved outcomes following more extensive resection. 4,5  In their recently published perspective piece, Grasso et al., have described briefly the clear advantage afforded by gross total resection of the enhancing part of the tumour when compared with incomplete resection. 6  There are now studies also showing a clear benefit of supramaximal resection of the T2 abnormality area beyond the enhancing part. 7  The current modality of choice for determining extent of resection following glioblastoma surgery is MRI with contrast. The timing of this scan is debated amongst neurosurgeons and radiologists. The current standard has been set at <72 hours post-surgery based on early studies. 3  Henegar et al., were the first to describe postoperative MRI changes following non neoplastic brain parenchyma resection and enhancement patterns that occur as a result of surgery itself. 8  Ekinci et al., published a detailed account of early post-operative MRI (EPMR) changes following tumour resection in the first 12-24 hours following surgery. 9  They designed this study to avoid reactive enhancement that had been shown to develop even prior to 72 hours and described three patterns of enhancement, thin linear (normal dural enhancement), thick linear (likely neoplastic) and thick linear-nodular (likely residual) and examined their relationship with disease recurrence and progression. 9  Prior to this study it was believed that there was a 72 hour diagnostic window where all enhancement was due to residual disease. It was found that enhancement in some form exists at even less than 24 hours following surgery however the pattern of this enhancement was deemed to be important. 9  Lescher et al., demonstrated that patterns of enhancement are influenced by field strengths as well. They also showed that nonspecific enhancement occurs prior to the stipulated 72 hour window and is also influenced by pre-operative or intra-operative contrast administration. It was therefore advised to compare pre-operative and post-operative scans to identify a residual enhancing tumour. 10  Bette et al., recently described in detail the pattern and time dependence of nonspecific enhancement following glioma surgery on 3T MRI scanners. Their data showed that enhancement occurred at all time periods, and even as early as 17 hours post-surgery. Their results however showed a significant increase in enhancement after 45 hours.11 We would like to mention a new modality that has recently come to the fray for postoperative glioblastoma imaging. O-(2-18 Ffluoroethyl)-L-tyrosine positron emission tomography (FET-PET) has been shown to identify areas of residual disease that are not obvious even on EPMR. These areas have a demonstrable high risk of recurrence of disease. 12

Based on the available evidence, we conclude that postoperative
imaging in case of glioma surgery should be acquired as early as possible and any enhancement observed should be carefully compared with preoperative imaging to delineate true residual disease from reactive enhancement that is invariably present in the post-operative environment. MRI done beyond 72 hours becomes increasingly unreliable. It would also be prudent to use the same scanner and field strength when acquiring images.