Madam, Genetics and environmental factors can be the cause of triggering osteoporosis which is prevalent among post-menopausal women due to estrogen deficiency. This condition is characterized by decrease in bone mass and strength, remains asymptomatic and consequences lead to sudden fracture sinpos tmenopausal women.1 Since many years Bone Mineral Density (BMD), DEXA scan and many other biological/ clinical markers such as serum base bone formation marker procollagen (S-PINP) and bone resorption marker C-terminal telopeptide are being used to determine the risk of osteoporosis. Nevertheless a molecular marker that can diagnose or detect the risk at an early stage to prevent Post-men opausal women from its consequences is required.2 epigenetic factors that regulate the gene expression mechanism, Non coding miRNA is discovered to have direct influence on gene translational mechanisms. 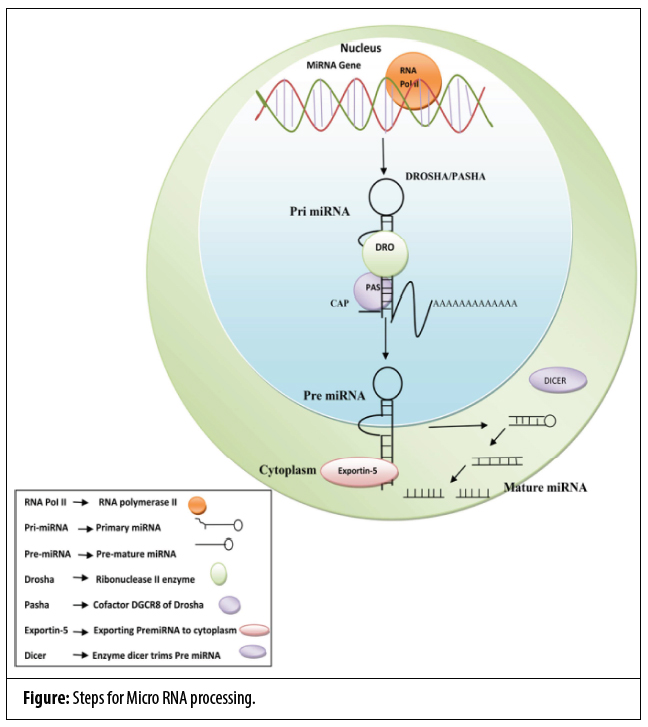 Non coding miRNA can connect us to pathogenesis and epidemiology of disease because down regulation of specific protein expression or biomarker is regulated by specific miRNA in specific disease condition. Micro-RNA was first discovered in research model organism i.e. Caenorhabditis elegans. Micro-RNA can be both non-coding genes and exonic spliced shortnucleotide sequences which induce a silencing complex at gene translational level by binding at 3` seed region of the mRNA to 7-8 nucleotide. Complementarity between seed region and miRNA decides reduce translation or degradation of specific miRNA. Mature miRNA consist of 22 to 24 nucleotide sequence after post-transcriptional modification. Micro-RNA are transcribed by RNA poly II, initial modification of non-coding transcript occurs in nucleus by Drosha ribonuclease III enzyme. Which produces a step loop sequence of about 70 nucleotides. Further modification is followed by another cytoplasmic enzyme Dicer ribonuclease to produce a mature Micro RNA.3,4 MiRNA are master regulators of many biological processes including many diseases. These are involved in remodeling of bone by bone formation/resorption, bone cell growth, differentiation and function. miRNA 133a causes down regulation of RUNX2 expression, which is required for regulation of osteoblast genesis, its expression is found to be altered in post-menopausal females of osteopenia and osteoporosis because of estrogen deficiency in postmenopausal females, therefore miRNA 133a is up regulated in osteoporotic condition. On the contrary miRNA 27 is down regulated in osteoporosis conditions; its function is to promote osteoblast differentiation in post-menopausal women. Thus serum level qualitative and quantitative analysis of microsomal RNA may bring possibilit y to early diagnosis of osteoporosis.5 MiRNAs are highly stable in tissues, bio fluids and rapidly released in circulating system at initial stage of pathology therefore blood serum and plasma MiRNAs detection can be cost effective and quick source to detect disturbance in bone structure and function in osteoporosis.

Disclaimer: None to declared.

Conflict of Interest: None to declared.

Funding Sources: None to declared.