Nonbacterial thrombotic endocarditis (NBTE) refers to noninfectious vegetations of the heart valves. It is commonly associated with malignancy and autoimmune diseases like systemic lupus erythematosus, Rheumatoid arthritis. Herein, we present Non-bacterial thrombotic endocarditis and Disseminated intravascular coagulation as the initial manifestations of prostate cancer. A 50-yearold gentleman, known case of hypertension and diabetes, presented with a history of recurrent ischaemic strokes, STEMI and a recent diagnosis of infective endocarditis. He had been taking antibiotics for the past 20 days without any improvement. Negative blood cultures in the presence of vegetations on repeat echocardiography led to a suspicion of NBTE. Laboratory investigations were suggestive of Disseminated intravascular coagulation. CT abdomen and pelvis demonstrated enlarged prostate with enlarged pelvic lymph nodes. Prostate specific antigen was raised at more than 100ng/ml. A bone scan showed extensive metastasis. The patient was started on GnRH analogue and bicalutamide. His Disseminated intravascular coagulation resolved and he was subsequently started on anticoagulants. The valvular lesions diminished without any residual dysfunction.
Keywords: Nonbacterial thrombotic endocarditis, disseminated intravascular coagulation, prostate carcinoma. doi: 10.5455/JPMA.9385.

The terms nonbacterial thrombotic endocarditis (NBTE), marantic endocarditis, Libman-Sacks and verrucous endocarditis all refer to sterile vegetations on heart valves. It is associated with advanced malignancies, autoimmune diseases like systemic lupus erythematosus (SLE), Rheumatoid arthritis (RA) and chronic infections like tuberculosis.1 Malignancies commonly implicated are adenocarcinomas of the pancreas, followed by lung, colon, prostate and others. 2 Malignancy is associated with the spectrum of manifestations ranging from abnormal coagulation tests in the absence of thrombotic symptoms to migratory superficial thrombophlebitis, arterial thrombosis, disseminated intravascular coagulation, thrombotic microangiopathy, NBTE and massive thromboembolism. Disseminated intravascular coagulation (DIC), resulting from generalized activation of the coagulation system, is the most common coagulopathy associated with malignancy. Here, we present a case of NBTE and DIC as initial manifestations of metastatic carcinoma prostate in a living patient.

A 50-year-old gentleman presented to the Northwest General Hospital and Research Centre emergency room with sudden onset left sided weakness and slurred speech for the past two hours in July 2017. He had hypertension and diabetes for the past two years and was well controlled with medications. He had a Transurethral resection of the prostate (TURP) procedure performed for prostate related symptoms, three years back which on histopathology was reported as Benign Prostatic Hyperplasia. The patient had an ST elevation myocardial infarction two months back and he was started on antiplatelet therapy. He was readmitted in cardiology department with another STEMI accompanied with sudden left sided weakness in the following two months duration. MRI brain at the time had shown multiple infarcts in bilateral occipital and parietal regions. Echo reported ejection fraction of 56% with vegetations on Mitral and Aortic valves. Despite all blood cultures being negative, the patient was discharged on antibiotics and antiplatelets. On arrival, he was vitally stable. Physical examination revealed a large bruise on the back while the neurological examination was significant for slurred speech, left sided weakness with upper motor neuron signs. Laboratory investigation sreve aledanaemia , thrombocytopenia (platelet count 61) with normal cell count. He was having coagulopathy with APTT more than 120 seconds and PT more than 60 seconds. The peripheral smear showed fragmented rec cells. Investigations are shown in Table. 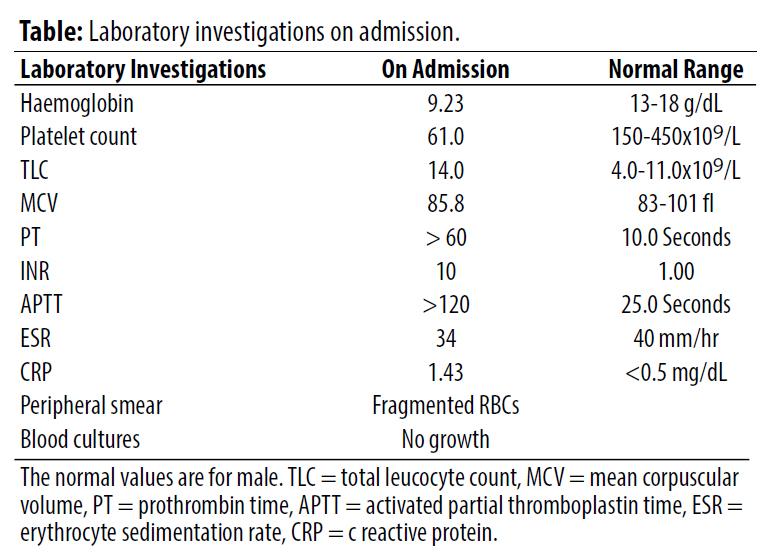 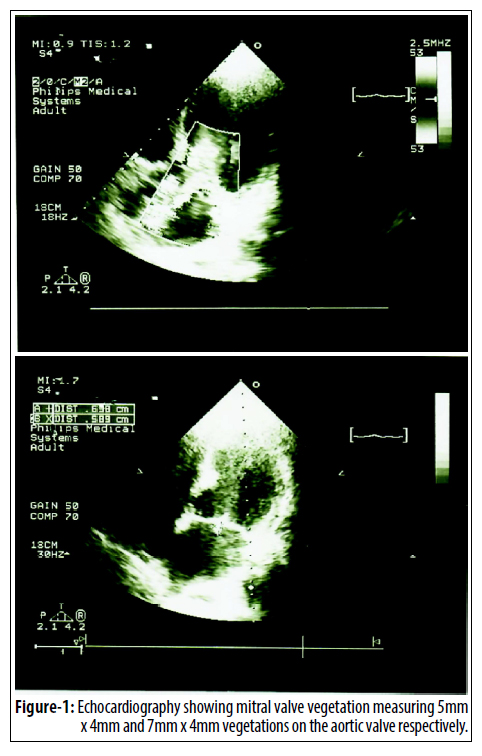 Ejection fraction was 56%. Serial blood cultures were again negative. A suspicion of NBTE was raised. Since malignancy is the most common cause of NBTE and DIC, a source of malignancy was looked for. In view of the history of TURP, digital rectal was performed and examination showed an enlarged stony hard prostate. Abdomen and pelvis ultrasound showed prostatomegaly of 20gm and a bladder diverticulum. PSA was found to be more than 100ng/ml, which is 99.7% specific in diagnosing prostate cancer. 3 A CT abdomen and pelvis showed, multiple enlarged lymph nodes in para-aortic location, pelvic lymph nodes, and a bladder diverticulum. Bone-scan showed extensive metastasis.  He was diagnosed with NBTE and DIC as a consequence of metastatic prostate cancer. Antibiotics were stopped and the patient was administered fresh frozen plasma. The attendants refused further interventions including cystoscopy and prostate biopsy and a palliative course was agreed upon. The patient was subsequently started on bicalutamide daily and Leuprolide depot. Within a week his coagulation profile and platelet counts recovered. He was subsequently started on lifelong enoxaparin. Follow-up echo cardiography after seven days demonstrated resolution of the lesions in comparison with previous echocardiography. There was no residual valvular dysfunction (Figure 2). 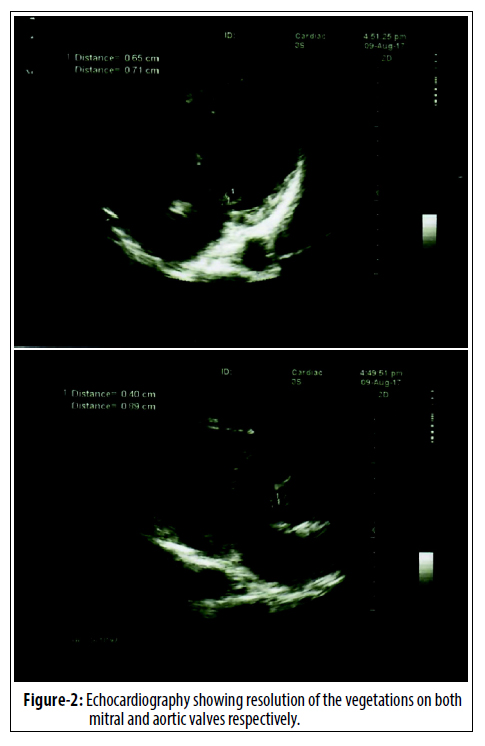 Zoledronic acid was administered for bony metastasis. He was discharged vitally stable after eight days of hospitalization. The patient has been on regular follow up, his repeated echocardiography after two months showed completely resolved lesions and he has shown marked clinical improvement.

NBTE is a non-infectious form of endocarditis characterized by deposition of sterile thrombi on heart valves. It is commonly associated with malignancy followed by auto immune condition slike system i clupuserythematosus, rheumatoid arthritis. 1 Patients generally belong to 40-80-year age group with no gender predilection. 4 The epidemiology, however, is also influenced by the underlying condition. The diagnosis is mostly made on post-mortem. A study of 171 cases of NBTE encountered at autopsy, malignancy was detected in 59% of cases. 5 Valves most commonly affected include aortic, mitral, or a combination of both. Vegetations are typically present on the atrial surface of the atrioventricular valves and the ventricular surface of the outflow valves. Known as white thrombi, these vegetations are composed of sterile platelets with strands of fibrin, immune complexes, and mononuclear cells without any significant inflammatory response and hence a higher tendency to detach and cause extensive embolization. According to one study, embolization was identified in approximately 42% (range, 14.1%-90.9%). The initial clinical manifestation is also due to embolism rather than valvular dysfunction. 4 The clinical presentation varies depending on the site of embolization ranging from acute coronary syndrome, mesenteric ischaemia to ischaemic limb. There are no pathognomonic signs and symptoms for diagnosing NBTE. Cardiac murmurs an essential features for the diagnosis of infective endocarditis, are rarely encountered. DIC is not a disease but a manifestation of an underlying disorder. It is the most common haematological abnormality observed in prostate cancer.6 DIC is considered to be the underlying pathophysiology leading to the development of NBTE. A new onset ischaemic stroke in the setting of known malignancy and with laboratory evidence of DIC should make the clinician strongly suspicious of NBTE. The mainstay of treatment of NBTE is anticoagulation and treatment of the underlying cause. Heparin both fractionated and unfractionated is the drug of choice. 7 Vitamin K antagonists should not be used in patients with malignancy-associated NBTE, as recurrent thromboembolic events are common. No data is available regarding NOACs or fondaparinux. Anticoagulation must be continued indefinitely due to risk of recurrent thromboembolism upon discontinuation. Cardiac surgery is considered in selected circumstances to prevent recurrent thromboembolism. In contrast to infective endocarditis, there is no residual valve damage. Case reports have shown resolution of DIC within a week after the commencement of chemotherapy in CA prostate. 8 This was also demonstrated in our patient with resolution of DIC once chemotherapy with bicalutamide and leuprolide was initiated. The prognosis is usually poor in case of NBTE associated with malignancy either because of multiple thromboembolic phenomena or the advanced underlying malignancy. In conclusion, NBTE is a rare but devastating manifestation of malignancy-associated thrombophilia. Screening for an occult malignancy should be performed in any patient presenting with features suggestive of NBTE. DIC is asystemic process with the potential for causing thrombosis and haemorrhage. Definitive therapy for NBTE includes antitumour therapy directed at the underlying malignancy and indefinite anticoagulation with unfractionated or low molecular weight heparin. Vitamin K antagonists such as warfarin are ineffective and should not be employed in management. The long-term outcome for most patients with malignancy-associated NBTE is poor because it is typically associated with disseminated and incurable malignancies. Nevertheless, antitumour and anticoagulant therapies often have significant palliative benefit and should be used  for most patients with NBT E.

Conflict of Interest: A written consent was taken from the patient and the authors declare that there is no conflict of interests regarding the publication of this paper.
Disclaimer: None to declare.
Funding Sources: None to declare.

Retrocaval ureter: a rare cause of intermittent right flank pain in a 37 years old lady