Atrial fibrillation (AF) is the most commonly encountered arrhythmia in cardiology practice. A diagnosis of AF implies a greater need for hospitalization, a higher risk of stroke and heart failure, and earlier mortality. These complications can be avoided if AF is diagnosed and treated in a timely manner. To achieve this, physicians need to maintain a high index of clinical suspicion, practice cardiovigilance, and screen for AF in appropriate clinical settings. This review describes the vast spectrum of endocrine and metabolic disease that are associated with AF. Through this perspective, it encourages physicians and endocrinologists to play an active role in AF detection, referral and long term management.

Atrial fibrillation (AF) is a commonly encountered supraventricular arrhylhmia characterized by lowamplitude baseline oscillations (for fibrillory waves originating from the atria), along with an irregrlarly irregular ventricular rhythm. The f-waves which have variable amplitude, shape and timing, exhibit a frequency of 300-600 beats/minute.

AF is classified according to its natural history, or the predominant autonomic environment that it occurs in.1 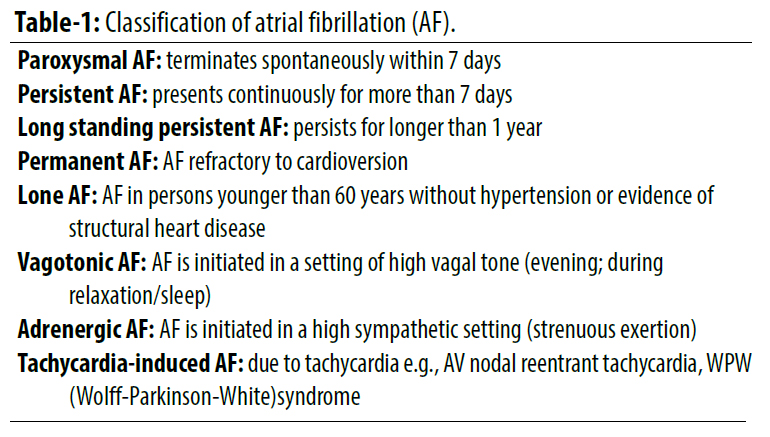 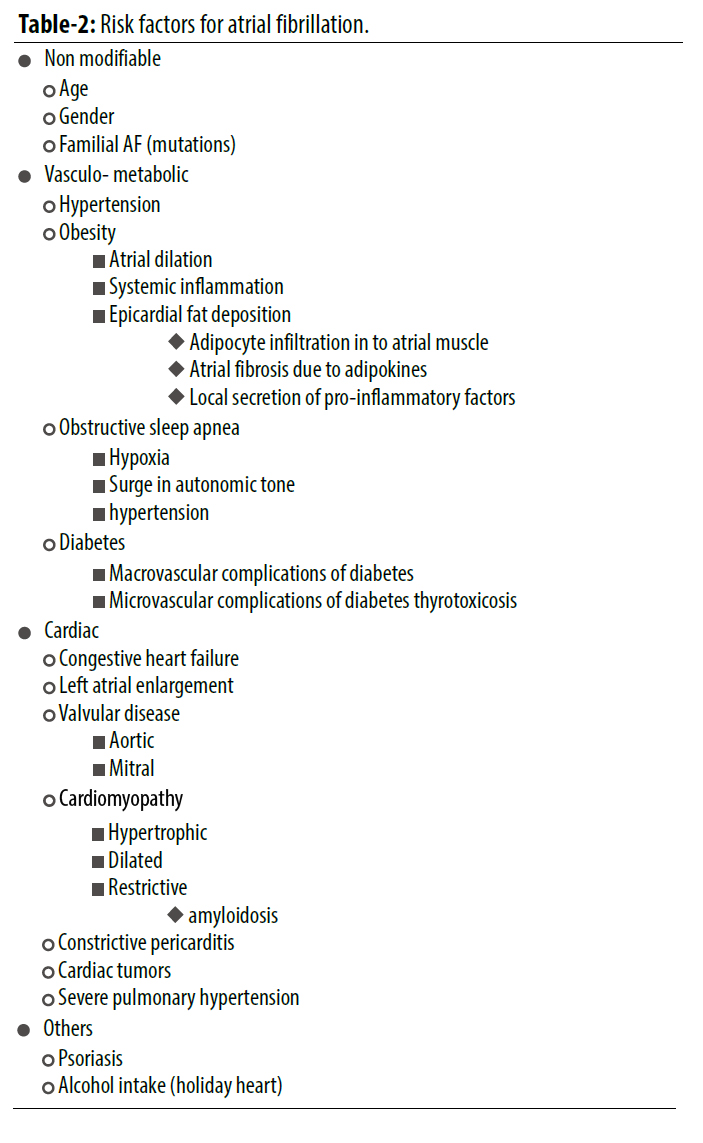 Table 1 and 2 list the various types of AF, while Table 3 summarizes the endocrine and metabolic connections of AF. 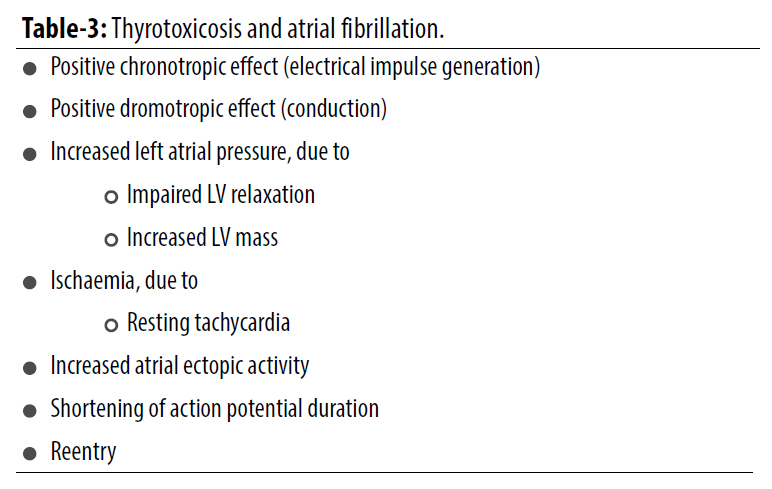 The ORBIT-AF registry shows that persons with diabetes form a significant (29.5%) proportion of all patients with AF. They are likely to be younger, have hypertension, chronic kidney disease, heart failure, coronary heart disease and stroke. They also have a poorer quality of life, and are more likely to receive anticoagulation. They experience a higher morbidity and mortality risk, including cardiovascular hospitalization, hospitalization, cardiovascular death, sudden cause death, and noncardiovascular death. However, no difference in risk of thromboembolic events, bleeding-related hospitalization, new- on set hear t failure, and AF progression. 2

Thyrotoxicosis is the most common correctable cause of AF with a 5 fold increased risk being documented. AF is more common in hyperthyroidism, in patients with triiodothyronine (T3) toxicosis and in the elderly. 3 Subclinical hyperthyroidism is also associated with a 3 fold rise in AF, and low TSH levels correlate positively with risk of AF. Among people 60 years of age or older, a low serum thyrotropin concentration is associated with a 3x higher risk of AF development within a decade. 4 Some mechanisms by which thyrotoxicosis may cause AF are listed in Table 4. 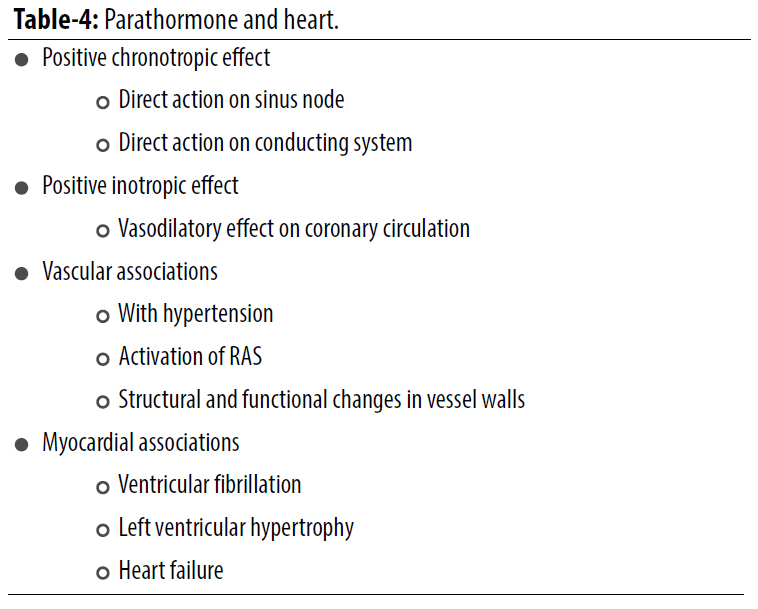 Thyrotoxicosis exerts a marked chronotropic and dromotropic effect. Elevation of leftatrial pressure secondary to increased left ventricular mass and impaired ventricular relaxation, ischaemia resulting from increased resting heart rate, and increased atrial ectopic activity also predispose to AF. Re-entry is one of the important mechanisms leading to AF. AF is facilitated if effective refractory periods are short and conduction is slow. Hyperthyroidism-associated shortening of action potential durational so contributes to AF. 5,6 Correction of hypothyroidism leads to cure of AF. This has been noted not only in overt thyrotoxicosis, but in subclinical hyperthyroidism as well. A case series described four patients with persistent atrial fibrillation associated with normal plasma to talthyroxine ( T4 ) and triiodothyronine (T3) but an absent plasma thyrotrophin (TSH) response to intravenous thyrotrophin releasing hormone (TRH). Cardioversion failed initially, in three of them. Following antithyroid drug therapy, sinus rhythm was established in all (1 spontaneous, 3 af ter cardioversion).7

Pituitary adenylate cyclase activating polypeptide (PACAP), which is known to activate intracardiac postganglionic parasympathetic nerves, has a profibrillatory effect on the heart. In a dog model, PACAP is shown to shorten effective refractory period (ERP) and conduction time. This may lead to induction of AF. 8 Case reports of AF in patients with pituitary tumours have been published.9,10

Parathyroid hormone (PTH) is found to be elevated in patients with AF. 22 Case reports of AF in parathyroid tumour have been published in literature. 12,13 PTH has cardiotropic effects, which are mediated via PTH receptors that are present in the heart as well as other parts of the cardiovascular system. 14The effects of PTH on the CVS are listed in Table 5. PTH-related peptide levels have been noted to fall after electrical cardioversion in patients with new-onset AF. 11 PTH elevation has been noted in patients with AF, especially in those with AF and hypertension, in those with permanent AF, and in those who were in AF during blood sampling. PTH levels correlate with left atrial size as well. Experts feel that both rhythm and blood pressure play a role in PTH elevation. AF may cause PTH rise by leading to loss of atrial contraction, atrial volume and pressure overload, atrial stretch, and the resultant 10-20% fall in cardiac output. 14 Data regarding the correlation of vitamin D deficiency with AF reveals conflicting evidence. While some authors report a higher incidence of AF in vitamin D deficient persons, others suggest that vitamin D deficiency is unrelated to type of atrial fibrillation, its complications or outcomes.15,16 Higher serum phosphorus levels are associated with greater AF risk; a 1 mg/dl rise in serum phosphorus leads to a hazard ratio of 1.13 (95% confidence interval 1.02- 1.26) of AF, irrespective of gender or race. This association occurs only of eGFR is 90 ml/min/1.72 m2 While total corrected calcium levels are not related to risk of AF, calcium-phosphorus product is associated with greater AF risk. 17 Case reports of symptomatic atrial arrhythmias in haemodialysis patients may be explained by high PTH &/or high phosphorus levels. 18

There are case reports of AF in patients with Cushing's disease, in anabolic steroid users and after intravenous methylprednisolone therapy.19-21 On the other hand, intravenous hydrocor tisone or dexameth ason e administration has been shown to reduce the risk of postoperative AF.22 This may be due to its antiremodeling, 23anti-inflammatory, 24 and anti-emetic action. 22 Animal studies have shown that atrial electrical and structural abnormalities occur if the animal is exposed to corticosteroid in the prenatal period, and develops high blood pressure later on. 25 This may explain the high incidence of AF with hypertension, and offer clues to its pathogenesis. Human studies have shown a higher expression of mineralocorticoid receptors in atria of AF patients. Atrial aldosterone is not increased in AF patients, but the high expression of mineralocorticoid receptors may augment its effects. This can induce atrial ionic remodeling and calcium overload, and thus cause AF. Yoga training has been shown to reduce symptomatic AF episodes, asymptomatic AF episodes, symptomatic non-AF episodes, depression and anxiety in patients with paroxysmal AF. Yoga also improves quality of life, reduces heart rate, and blood pressure. The reduction in arrhythmia burden caused by yoga may be attributed to its effects on adrenal function or stress. 26 The mineralocorticoid receptor is also thought to be involved in the pathogenesis of AF. 27

Gender differences in electrophysiology are well known. Inappropriate sinus tachycardia occurs mostly in women, and is rare in men. Women have a lower prevalence of AF, but higher risk of death once AF occurs. Their risk of experiencing sudden cardiac death is less, though their chances of acquiring long QT syndrome with antiarrhythmic drugs are greater. 28 It is possible that oestrogen receptors, present in atrial myocytes, may modulate these differences. Diminished estrogen receptor occupancy up- regulates the number of functional L-type calcium channels, leads to a shorter sinus length, and may promote arrhythmias. Menstrual cycle changes are also observed in women, with a lower heart rate being documented during menstruation. Supraventricular tachycardia is relatively more common during pregnancy. 28Testosterone deficiency is associated with an increased risk of AF in men aged 55 to 69 years, and men aged 80 years. Estradiol levels are associated with incident AF as well, but dehydroepiandrosterone sulfate (DHEA-S) levels do not exhibit statistically significant correlation with AF. Reduced testosterone is also associated with lone AF in men.29,30 AF has been reported in a case of familial cardiomyopathy, primary testicular failure and collage noma. 31

Atrial fibrillation (AF), the commonest arrhythmia in both outdoor and indoor clinical practice, is associated with higher risk of stroke, all-cause mortality, and heart failure. AF is linked with multiple metabolic and endocrine morbidities. The endocrinologist should play an important role in AF detection and referral. This review encourages cardio vigilance, and especially electro-cardio vigilance, in endocrine practice, by sharing an endo-metabolic perspective of AF.