Objective: To identify and explore medical students' perceptions about their academic failure.

Method: The qualitative study was conducted at Shifa College of Medicine, Islamabad, Pakistan, from December 2016 to January 2017, and comprised medical students. Two focus group discussions and 5 semi-structured interviews were conducted with students who had obtained <50% marks in their first professional examinations. Key words and important points in the written text were highlighted, coded, themed and categorised. Data was analysed manually.

Results: There were 22 students in the two focus group discussions; 13(59%) males and 9(41%) females. Of the 5 interviewees, 3(60%) were males and 2(40%) were females. Variable factors related to failure ranged from curriculum, assessment, environment, educators and personal factors to issues relating to stress and time management, learning resources, financial support, living away from home, poor attendance, peer pressure during small group discussions and indoctrination by parents.

Conclusion: Both personal and environmental factors were found to be affecting academic performance of medical students.

A mushroom growth of private medical colleges in Pakistan has led to poor quality of student intake along with an increase in students who are unable to cope with the rigors of medical studies.1 This has led to confidence lack, decreased motivation, repetitive underperformance and, ultimately, exhaustion of mental abilities. Some students drop out of medical college consequently.2 These traumas can produce unproductive and unsafe physicians. For success, students need an uneventful smooth journey through medical school, completing their course work in limited time and budget.3 Underperformance, burnout and failure leads to loss of time, money and affective wellbeing. Such students need to be identified, and their perspective understood so that suitable pre-emptive strategies can be implemented to help them.2,3 Academic failure stems from frequent absence from classes, dropping out, repeating the grade or low educational quality.4 Risk factors affecting academic performance can be cognitive4 (previous academic ability), noncognitive (personality, learning styles)3 and demographic factors (age, sex, ethnicity).5 Perceptions of students on causes of failure differ from those of faculty. Students usually attribute their failure to teachers, curriculum and assessment. They rarely recognize role of poor time management and improper study skills in failure. Students who blame others for their underperformance find it difficult to succeed. It is vital to modify this thought process. Al Amri6 concluded that students attribute failure to teachers, curriculum and information overload. Various studies signify that female students blame external factors while male students attribute internally and accept problems with English and time management. A study at Army Medical College showed poor time management, information overload, low grades in written assignments and lack of motivation as significant factors.7 In another study at Bahria Medical and Dental College, interesting gender differences in attributes were observed. Females were found to be strategic learners and better at time management. They knew more about assessment demands and scored better in areas where ideas were interrelated.8 An Iranian study showed significant relationship of students' scores with prior schooling, marital status, gender and residential status.9 In various studies in India and Bangladesh, unsatisfactory English comprehension, male gender, increased age and low preadmission caliber, lack of concentration, socio-cultural disparities, unfamiliarity with new terms and drug names were prevalent factors.10,11 It is imperative to identify these factors in our own set up to take immediate corrective measures to improve students' performance.

The qualitative study was conducted at Shifa College of Medicine, Islamabad, Pakistan, a private sector institution, from January 2016 to January 2017, and comprised medical students of preclinical years. A phenomenological approach was adopted to obtain qualitative data. The study required open-ended responses with gentle probing for clarification and in-depth analysis. After approval from the institutional ethics review committee, purposive sampling was used and students who had obtained <50% marks in the first professional examination were approached. Amongst these students, those who volunteered to take part in the study were given appointments for focus group discussions (FGDs), whereas all those who had scored ≥50% marks in first professional examination or those who were reluctant to participate were excluded. Two FGDs were conducted and they lasted till data saturation. Triangulation of data was done by conducting 5 semi-structured interviews. Each FGD lasted about 40 minutes and each interview about 10-13 minutes. Interviews and FGDs were conducted using a semistruc tured guideline consisting of open- ended questions.12,13 English was the language of communication. Any phrases spoken in Urdu were translated and verified. All transcripts were assigned unique identification numbers. FGDs and interviews were recorded, transcribed verbatim and coded. Themes and sub-themes were identified. Themes were developed inductively from the data after thorough reading of each verbatim transcript and highlighting the key statements, assigning open codes and comparing transcripts. The findings were presented to other participant to modify or suggest changes to data interpretation. Their suggestions were incorporated so that key points in summary could accurately reflect the data. 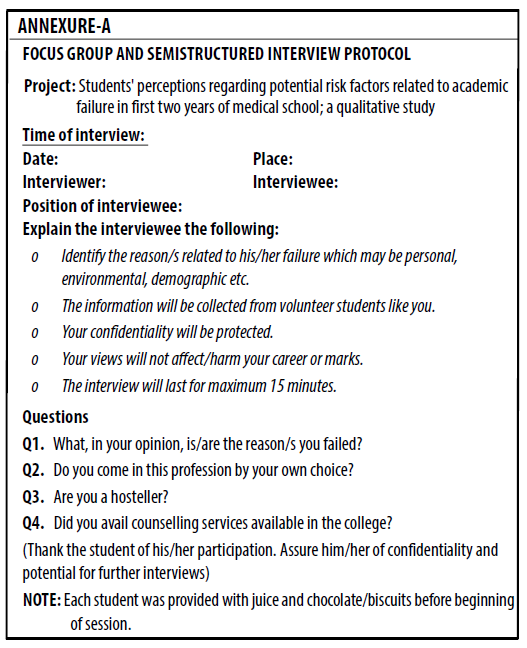 There were 22 students in the two FGDs; 13(59%) males and 9(41%) females. Of the 5 interviewees, 3(60%) were males and 2(40%) were females. There were 7(32%) students in the first year FGD, and 15(68%) in the second year FGD. After data analysis, student's perceptions about potential factors of their failure were divided into personal and environmental factors. These two main themes were formed after conjuring up 15 sub-themes ( Table). 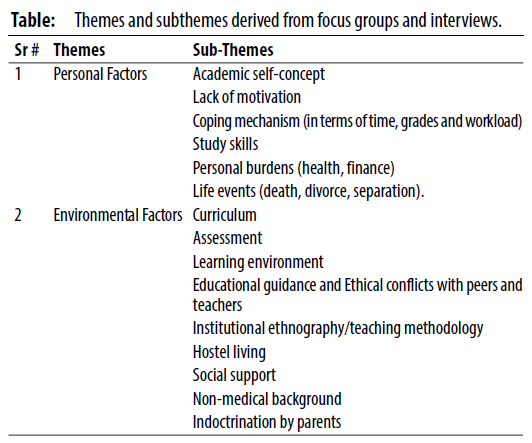 Significant factors contributing towards poor performance were identified. All are interlinked, leading to a vicious cycle of loss of motivation, self-worthlessness, poor internal grades, poor attendance, stress which further pushes the student towards losing hope and failure. Most of these factors, if identified and dealt with, can change the course of events. Certain interventions are needed at pre-admission level. Aptitude tests can readily determine the future per formance of students par ticularly if they are indoctrinated by parents/family members to enter medicine. Meanwhile, society must change its thought process; parents should give free choice to their off springs to select their career. Pakistan is a patriarchal society, so it is an act of disobedience to choose one's future profession by the student himself. The peremptory demand of 'doctor brides 'concept14 has forced the parents of girls to push them in to medicine. In these cases, effective counseling of parents is required. Teachers can identify at-risk students' dropping out by observing behaviours which comes under 'learning related skills' (LRS) of students. LRS include behaviours such as persistence in completing the task, attentiveness, learning independence, eagerness to learn, organization of thoughts depicted in written assignments, following directions, receptiveness to challenges, cooperation, prosocial behaviours, responsibility, directed attention, flexibility, ability to plan and solve problems.15 The stress of medical studies is more tangible in integrated curriculum. It is difficult for the students to catch up with curricular pace. The strain of medical studies is ominous for reasons discussed in result section. Our results reinforce the disquisition made by Moffat KJ,16 Biswas SS17 and Chew18 in their articles where they emphasize the problems faced by first year medical students leading to poor academic performance, an effect highlighted when the medical college curriculum is integrated, and problem based. The results of our study closely relate with study of Muzafar et al, where common stressors identified in a Pakistani medical college were: too much study with little balance, lack of sleep, lack of time-off, fear of failure, sense of neverending competition, scoring lower than expected and high parental expectations. Our study contradicts their findings in that they found that females and day scholars have higher incidence of burnout. In our study, we do not find any gender difference and it was evident that hostel residents face more problems in terms of adjustment, environment and distractions. They must work on their own and settle in a culture developed within hostel. These problems are enhanced particularly if the student is a foreign national as he/she is unaccustomed to institutional and environmental culture and cannot visit family frequently.19 The verbatim responses of failed students in our study invariably show symptoms of burnout. Out of the three aspects of burnout, medical students of preclinical years, experience personal and work related burnout.19

Disclaimer: Some of the findings of the current study were presented at the AMEE Conference in Karachi, Pakistan, held on March 3, 2016.

Conflicts of Interest: None.

4. Delors J. Learning: The Treasure Within. Report to UNESCO of the International Commission on Education for the Twenty-first Century. Paris: Unesco; 1996, pp. 22-8.

13. Biklen SK. Qualitative research for education: An introduction to theory and methods. Allyn and Bacon; 1992.

Effects of static stretching as compared to autogenic inhibition and reciprocal inhibition muscle energy techniques in the management of mechanical neck pain: a randomized controlled trial

Do recipients of cash transfer scheme make the right decisions on household food expenditure? A study from a rural district in Pakistan