A retrospective study of endometrial stromal sarcoma: an institutional review

This is a retrospective study conducted at Shaukat Khanum Memorial Cancer Hospital, Lahore, from January 1995 to April 2016, to determine the clinical presentations, pathological features, cancer free survival and rate of recurrence in patients with Endometrial Stromal Sarcoma (ESS). Data was collected from May to August 2017. A total of 31 patients with a mean age of 40.0±11.72 years were treated. Among them, 12 (38.7%) had stage I, 2 (6.4%) had stage II, 6 (19.3%) had stage III and 11 (35.5%) had stage IV ESS. All patients underwent surgical management as an initial treatment modality for ESS. Out of these 31 patients, 17 were under active surveillance, 4 had expired and 10 patients were lost to follow up. Eleven (65%) patients were disease free, recurrence was noted in 4 (23.5%) patients and 2 (12%) patients had persistent disease. Recurrence of disease was managed with surgical excision and multimodality treatment. Median duration of follow-up was 38.29 months. Endometrial stromal sarcoma (ESS) is a rare uterine tumour. Our patients were young and had lower rate of recurrence. Surgical management was the mainstay of treatment in patients with resectable disease while other options used included hormonal therapy, radio therapy or chemotherapy.

Endometrial Stromal Sarcoma (ESS) is a rare uterine mesenchymal neoplasm. This retrospective study was conducted to look at management strategies and outcomes of ESS type cancers in our region. Shaukat Khanum Memorial Cancer Hospital is a tertiary care cancer hospital. We conducted this study to observe and record the oncological outcomes of ESS in our patients. On a global scale, ESS accounts for approximately 0.2 to 1 percent of all uterine malignant neoplasms. The global incidence of ESS is 1 to 2 out of one million women.1,2 It commonly presents with vaginal bleed, pelvic pressure and lower abdominal pain. Historically, ESS cancers were categorized into different subcategories. There was much confusion in the past regarding ESS cancers due to their changing categorizations. Now, the World Health Organization has further categorised them into four separate entities for better understanding. The World Health Organization (WHO) recognizes ESS as:3,4

Surgical management is the mainstay treatment modality in early course of disease. While in later stages, whenever the disease is resectable, surgical intervention is preferred. For patients with non-resectable tumours, other options like hormonal therapy, chemotherapy or radiotherapy are considered appropriate. Each modality is to be considered by the treating physician. Currently hormonal management has shown to be effective in control of disease progression.5

This is a retrospective study conducted with the patient population of Shaukat Khanum Memorial Cancer Hospital. Computerized hospital data was reviewed and analysed to select the patients who underwent surgical or nonsurgical intervention for Endometrial Stromal Sarcoma between January 1995 and April 2016. Additional information for these patients was collected from the hospital medical archive. A total of 31 patients came to the hospital with ESS during this period. The data collected was analyzed, including treatment modalities, clinico-pathological characteristics, stages, oncological outcomes, follow-up duration and recurrence rates. Data was analyzed on IMB SPSS 20. The patient characteristics are shown in Table 1. 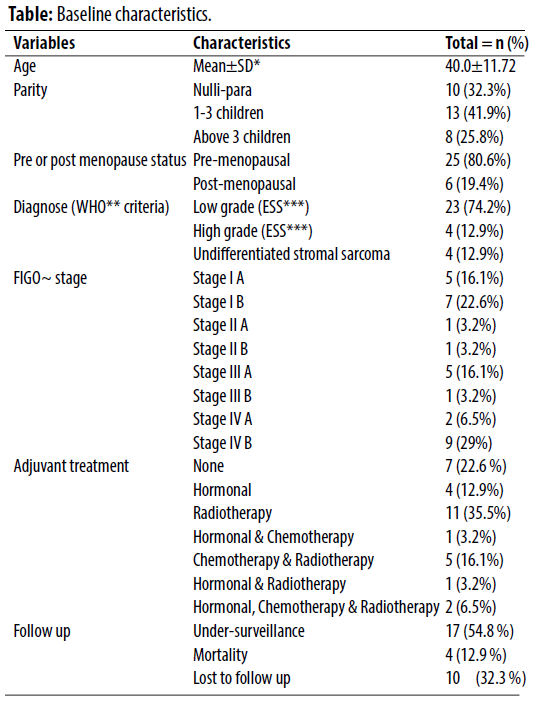 Majority of patients were found to be pre-menopausal in this retrospective study. Stage I comprised of 12 (38.7%) patients, 2 (6.4%) patients had Stage II, 6 (19.3%) had Stage III and 11 (35.5%) had Stage IV. All patients underwent surgical management as initial treatment for ESS. Out of a total of 31 patients, 17 were under active surveillance. Four patients had died while 10 were lost to follow up. Four patients developed recurrence at 8, 61, 96 and 102 months after initial surgical management and were managed by different treatment modalities such as surgical excision of recurrence, hormonal treatment, chemotherapy and radiotherapy. Results have been tabulated in Table-2.

Management of endometrial Stromal Sarcoma presents as a clinical dilemma as it is a rare uterine tumour.1,6 Initial management remains surgical excision if tumour is potentially resectable.5-7 The standard surgical treatment is hysterectomy with bilateral salpingo-oophorectomy. The role of routine pelvic and para-aortic lymphadenectomy is debatable in Endometrial Stromal Sarcoma.8,9 When the tumour is non-resectable or when there is recurrence of disease, different non-surgical modalities of treatment are considered. These modalities include hormonal therapy, chemotherapy or radiotherapy. For patients with localized recurrence, surgical resection is another option to consider as noted in some reports showing survival advantage.10-13 In our study, more patients were pre menopausal and in younger age group as compared to a study published by Chan et al in British Journal of Cancer (2008),1 where the median age was 52 years as compared to 40 years in our study. This was by far the largest study published with 800 patients. In our study few patients had stage I disease while more had stage IV compared to the aforementioned study. In our case series, as compared to the study conducted by Nordal et al (1996),14 age was not a significant prognostic factor. However increasing stage and grades were associated with poor prognosis. In our surgical protocol, pelvic and para-aortic lymph node dissection was not included in primary surgery, so we cannot comment on the value of this dissection approach as either of therapeutic or prognostic benefit, as stated by Chan et al. Similarly, our patient population underwent hysterectomy and bilateral salpingo-oophorectomy on primary dissection; hence, we were unable to comment on ovarian sparing approach in younger age group with ESS. After analysis of ESS at Shaukat Khanum Memorial Cancer Hospital, we have observed a lower recurrence rate of 23.5% as compared to the study published in the British Journal of Cancer. There were limitations to our study on endometrial stromal sarcoma. Because ESS is a rare uterine cancer, the total number of patients or sample size for this study remained small, which should not be unexpected and this was a drawback. Another limitation was a decrease in the number of patients during the follow up period. 10 patients were lost to follow up, so unfortunately, their ESS outcome is not known. In order to gain more information, prospective studies or randomized control trials should be planned to set guidelines for ESS management. We need to continue observation, research, and extend the follow up of each stage separately in further studies. Our team is still collecting data to formulate local guidelines for ESS management. Most of the available data concerning Endometrial Stromal Sarcoma is from retrospective studies, case series, case reports and review of literature. There are no set guidelines for ESS treatment as yet.

Endometrial Stromal Sarcoma (ESS) is a rare uterine tumour. The rarity of ESS has not led to any conclusive treatment plan for patients. Currently, surgical management is the mainstay in potentially resectable disease for ESS patients. In non-resectable disease, nonsurgical treatment modalities include hormonal management, radiotherapy or chemotherapy. Hormonal therapy has shown promising results in advanced Endometrial Stromal Sarcoma disease.

Funding Sources: None to declare.