Customized disposable kit versus a conventional stainless steel instrument for an intravitreal injection: A comparison

Comparison of a customized disposable kit with a conventional stainless steel instrument was performed for an intravitreal injection. A total of 2700 eyes of 2250 patients were enrolled in two groups. Comfort level of the patients was assessed using a 'Pain Scale' and any post intravitreal injection complications were examined clinically by a slit lamp biomicroscopy. Surgeon's ease was assessed by a questionnaire. In group A, no pain was recorded in 1231(82.06%) eyes, mild pain was d escribed in 184(12.27%), moderate pain was documented in 78 (5.2%) while, severe pain was noticed in 7(0.47%). In group B, no pain was seen in 1014(84.5%), mild pain was present in 123(10.25%), moderate pain was perceived in 58 (4.83%) while, severe pain was recorded in 5 (0.42%). With respect to surgeon's ease, 6 out of the 7 surgeons found the kit to be more convenient and cost effective as compared to the conventional instruments. Disposable intravitreal kit is beneficial for both the patients as well as the surgeons.

A couple of decades ago, intravitreal injections of air (pneumatic retinopexy) were used as a remedy for retinal detachment.1 Aiello et al.2 introduced the guidelines for intravitreal injections. Since that time, intravitreal injections have established its pivotal position in the field of ophthalmology in managing the posterior segment disorders. According to a publication, about four million intravitreal injections were performed in the United States in 2013.3 It also predicted the rise in the number of intravitreal injections to around 5.9 million in 2016.3 Intravitreal injections have changed the treatment scope for sight threatening conditions including age related macular degeneration, diabetic retinopathy, diabetic macular oedema, retinal vein occlusions, uveitis, cytomegalovirus retinitis, endophthalmitis and many more.4-6 Intravitreal injections demonstrate promising results but they also have noticeable side effects including raised intra-ocular pressure, subconjunctival haemorrhage, vitreous haemorrhage, retinal artery occlusion and endophthalmitis.7-9 Instrumentation is one of the most important aspects of intravitreal injection procedure. Being a very delicate and sophisticated procedure, instruments needs to be adequately sterilized and sharpened. Conventional stainless steel reusable instruments with disposable syringes are used for the procedure but with the advancing time, disposable intravitreal kits are gaining popularity across the world due to an easy approach for the surgeons as well as the patients.10 Intravitreal kit provides efficiency by reducing inventory management and liberating the time which is wasted on ordering, receiving and assembly of the components. It is easy to use and all the components are right at surgeon's hands. This study intends to demonstrate the efficacy of disposable intravitreal kit in terms of comfort for both the patient and surgeon as no such literature has been published earlier.

The study was conducted in Unit II of Ophthalmology Department of Lahore General Hospital from January 2017 to June 2018. Bio-data of patients included age, gender, personal address, contact number, diagnosis and laterality of disease were noted. Informed written consent was obtained from the patients and the procedure was signed by the concerned surgeon. Each patient was assigned one of the two groups using random number table. Detailed medical and surgical history with associated systemic conditions was listed down. Vitals were taken before the procedure and any patients with a blood pressure > 140/90 mmHg and a history of current ischaemic heart disease were referred to a medical specialist. A proforma with printed Wong Baker Faces Rating Scale11 was placed close to the patient before the surgery to assess the pain severity associated with tissue handling. Later on, a questionnaire was filled by the surgeon addressing cost effectiveness, convenience of use and the duration of the surgery. At first post-operative day, treated eye was examined clinically on a slit lamp biomicroscopy to look for the signs of an infection. After explaining the procedure, patient attained a supine position on the table, eye to be addressed was marked and topical anaesthesia was administered with a 0.5% Proparacain eye drops. Respective eye was then draped with 5% Povidone Iodine solution. Surgeon got scrubbed and the nurse opened an intravitreal Kit. Trolley sheet, eye sheet, cap and mask were taken. All the instruments were already set in the kit and no assistance was required during the procedure. Opsite was cut with a pair of scissors and applied. Speculum was inserted and an appropriate site of injection was marked with a calliper. Calliper was customized on the proximal aspect of the corneal forceps with two markings of 3.5mm and 4.0mm. Drug was injected in the globe and a needle passing through the conjunctiva and sclera was grasped by a corneal forceps. Gradually, needle was removed and an injection site was rubbed with a cotton bud. Speculum was removed and a pad which was also present in kit was applied. Post injection antibiotic drops were advised and the patient was called the next day for a clinical evaluation.

A total of 2700 eyes of 2250 patients were included in the study. Patients were divided into group A and B using a random number table. Group A had 1500 eyes of 1200 patients while group B had 1200 eyes of 1050 patients. Disposable customized kit was used to deliver the intravitreal injection in the group A, while conventional procedural items were used in group B. The demographics and characteristics of the patients in both groups are given in Table. 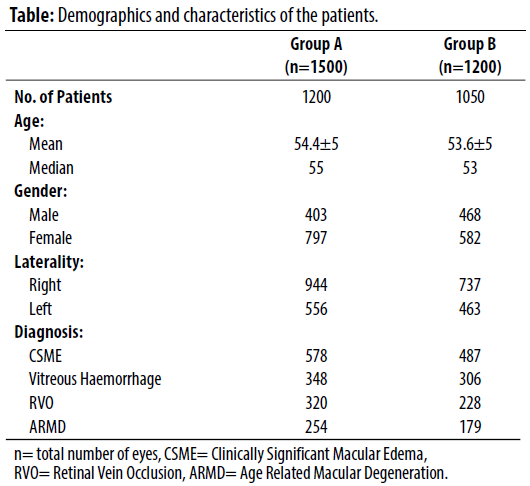 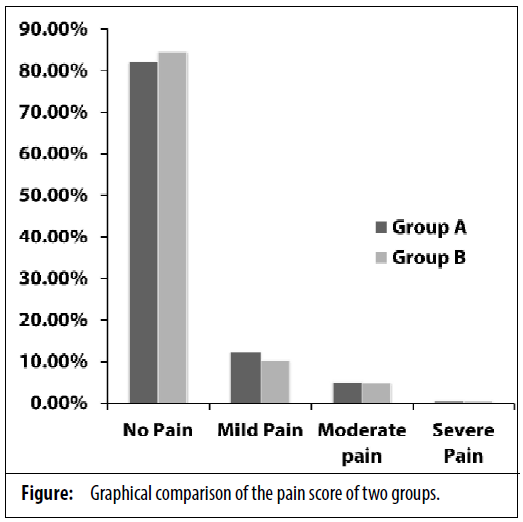 With respect to the surgeon's ease, 6 out of the 7 surgeons in four different institutes found this method more convenient and cost effective as compared to the conventional reusable instruments. One surgeon found no significant difference between the two. Mean duration of the procedure was 60±15 seconds in Group A and 75±12 seconds in group B.

Intravitreal injec tions have become one of the commonest procedures among retina specialists. It is a very effective modality in treating the posterior segment diseases and by significantly improving the vision it has d ecrea sed the need for a surgic al procedure.3 Intravitreal route is considered a gold standard treatment choice in certain ocular conditions, including diabetic macular oedema, wet age related macular degeneration (ARMD), vein occlusion associated macular oedema, uveitis (intermediate and posterior) and endophthalmitis.12 Different groups of drugs including anti vascular endothelial growth factor (VEGF), steroids, anti-bacterial, anti-viral and chemotherapeutic drugs are being administered intravitreally currently.13 Intravitreal injections show a promising result but these are also associated with a range of complications. These complications could be associated with the surgeon's method or a compromised sterilization technique; these include subconjuctival haemorrhage, anterior uveitis, raised intraocular pressure (IOP), iris depigmentation, cataract, vitreous haemorrhage, artery occlusion and endophthalmitis.14 An Intravitreal injection procedure requires a sophisticated fine instrument for tissue handling; sterilization is of utmost importance and needs to be addressed.15 This study shows beneficial aspects of disposable Intravitreal kit on the basis of patient's and surgeon's comfort. This disposable intravitreal kit contains a complete set of disposable instruments and fabric accessories including a gown, cap, mask, latex surgical gloves, trolley sheet, eye sheet, eye pad, opsite, speculum, scissors, calliper, corneal forceps and cotton buds. Currently, conventional stainless steel reusable instruments are being used after sterilization15 with prolonged surgical time as well as the cost. Surgical time increases when bringing the instruments in the theatre from the autoclave, when setting the instruments and when assistance is required from trained nursing staff. A study showed that on an average it takes 15 minutes16 to set the instruments before commencement of the intravitreal injection, which is quite higher (p<0.005) than the mean time (60±15 seconds) in our study. Cost is increased in terms of autoclave and surgical assistant charges. Endophthalmitis is one of the sight threatening complications associated with intravitreal injections causing gross visual deprivation and disfigurement of the globe at times. Incidence of endophthalmitis is very rare but still exists. According to the literature, its incidence with conventional stainless steel reusable sterilized instrumentation ranges from 0.021% to 0.03 %.17 Another study shows incidence of post intravitreal injection endophthalmitis as high as 8.5%,18 which is quite higher (p<0.005) than our study as our findings did not show any case of endophthalmitis with disposable intravitreal kit. A study19 conducted, demonstrated pain score in tissue handling during intravitreal injection in terms of Jenson Classification System. It revealed that 70% of patients were in mild to moderate pain score group with convent ional stain less steel reusable sterilized instruments; while in our study most of the eyes 1231/1500 (82.06%) were painless and 184/1500 (12.27%) complained of mild pain showing a considerable (p<0.005) difference in the pain score. Another study revealed that the pain associated with tissue handling in intravitreal injection was moderate as assessed by a visual analogue scale.20 This was the first national or international study conducted which highlighted the beneficial aspects of disposable intravitreal kit facilitating surgeons as well as the patients. Hence, establishing a novel trend in the field of intravitreal injection procedures.

Disposable intravitreal kit is beneficial both for the patients as well as the surgeons in terms of cost, time, painless handling of the tissues and infection occurrence.

Conflict of Interest: None

6. Maurice D. Use of Intravitreal Ganciclovir (Dihydroxy Propoxymethyl Guanine) for Cytomegalovirus Retinitis in a Patient with AIDS. Am J Ophthalmol 1987; 103: 17-23