Risk factors of subclinical atherosclerosis in obesity and overweight

Objective: To examine the relationship of carotid intima-media thickness with weight-gain, overweight and obesity.

Methods: The experimental, analytical study was conducted at the CF University Hospital, Cluj-Napoca, Romania, from 2012 to 2014, and comprised randomly selected in patients from the Medical Ward. The patients were divided into normal-weight subjects in Group I and overweight and obese subjects in Group II Intimate-media thickness was measured by carotid Doppler ultrasound. Data was analysed using SPSS 13.

Conclusion: Intima-media thickness was found to be increased in asymptomatic overweight and obese subjects, significantly higher in those with associated metabolic syndrome and high levels of highsensitivity C-reactive protein, as an indication of the presence of early, subclinical atherosclerosis.

In time, weight-gain leads to overweight and obesity, and the latter has become an increasingly frequent occurrence. The prevalence of obesity has doubled or even tripled in less than two decades, which is alarming in children where it reaches a percentage of 36% in some regions of Europe.1 In 2008, approximately 1.5 billion people were overweight, about 500 million were obese, with an average, by gender, of 205 million men (193-217 million) and 297 million women (280-315 million);2,3 in 2013, two-thirds of adults were overweight, one-third being obese.4 Epidemiological data from 2016 look extremely worrying: over 1.9 billion adults were overweight (39%), over 650 million are obese (13%), 41 million children under 5 years old, and over 340 million children and adolescents aged 5-19 years were overweight or obese.4 Over the last few decades, a large number of studies have reported a direct relationship between increased intimamedia thickness (IMT) and a higher cardiovascular risk. Two studies concluded that carotidian intima-medie thickness is an independent predictor of coronary heart disease and stroke.5 ,6 The multi- ethnic study of atherosclerosis demonstrated that a significant and positive association existed between yearly mean common carotid artery IMT progression and risk of stroke.7 In a cohort study of 6453 men, the metabolically healthy obesity phenotype was associated with an increased risk of subclinical carotid atherosclerosis.8 In a 2015 study, a larger waist circumference (WC) and a higher diastolic blood pressure (DBP) were parameters independently associated with higher IMT in healthy young adult males.9 Adding carotid IMT measurement to the known cardiovascular risk factors has been proposed as a strategy to improve cardiovascular risk prediction for an individual.10 The current study was planned to examine the relationship of carotid IMT with weight-gain, overweight and obesity.

The experimental, analytical study was conducted at the CF University Hospital, Cluj-Napoca, Romania, from 2012 to 2014. After getting approval from the institutional ethics committee, subjects were randomly selected from about 7500 patients admitted to the Medical Ward of the hospital. A simple random method generated a starting point as the first patient (the 9th patient) and then every fifth number from this starting point was selected (the 14th patient, the 19th patient, and so on). All the patients selected by this method were included in the study after they furnished an informed consent and the absence of a diagnosis and/or clinical complaints of heart disease or any diagnosis interfering with survival over the next 2 years was ensured. The patients were divided into normalweight (NW) subjects in Group I and overweight (OW) and obese (O) subjects in Group II.For each participant, a research sheet was prepared containing personal data like age and gender, personal and family medical history, anthropometric data, like weight, height and abdominal circumference, medication used, smoking and drinking status, daily physical activity, food habits, internet usage; objective exam and blood tests; carbohydrate metabolismrelated data, like fasting blood glucose (normal rate [NR] = 80-100mg%), glucose tolerance test in suspected subjects performed with the KONELAB 60i device (an analyzer fully automated, with random access photometric system. It is the latest and most sophisticated model in the range of random access, fully automated photometric analyzers. Its advanced technology and new design offer efficiency and accuracy in analysis as well as convenience in use), using the enzymatic method, data on lipid metabolism, like total cholesterol (TC) (NR <200 mg%), high-density lipoprotein (HDL) (NR >40mg% for women and >50mg% for men), low-density lipoprotein (LDL) (NR <100mg%), non-HDL cholesterol (NR ≤130mg%), serum triglycerides (TG) (NR <150mg%) determined with the KONELAB 60i device using the enzymatic method, BP performed in both the arms and the ankles (NR <140/90mmHg), and carotid Doppler ultrasound with ALOKA PROSOUND SSD 4000 (pure-HD with 3 probes; Linear Probe UST-5524-7.5 of 7.5 MHz, with pulsed Doppler). Patients with body mass index (BMI) 18.5-24.9kg/m2) were considered NW, BMI 25.0-29.9 kg/m2 as OW and BMI ≥30kg/m2 as O.11 IMT was measured by carotid Doppler ultrasound using an ALOKA S4000 ultrasound machine in B mode, with a 7.5 MHz linear transducer, by scanning the circumference of the bilateral carotid artery and calculating the average of the maximum values obtained.12-14 Data was analysed using SPSS 13. Kolmogorov-Smirnov and Shapiro-Wilk tests were used to verify the normality of distribution of continuous numerical variables. The differences between the mean values of continuous quantitative variables were assessed with the Student ttest, or the analysis of variance (ANOVA) test when several categories were present. The analysis of differences between the mean values of continuous variables whose distribution did not comply with the normality condition was carried out with the Mann-Whitney U test, or the Kruskal Wallis test when several categories were present. In order to analyse the difference between qualitative variables, the Z-test and chi-squared test were used. P<0.05 was considered statistically significant. 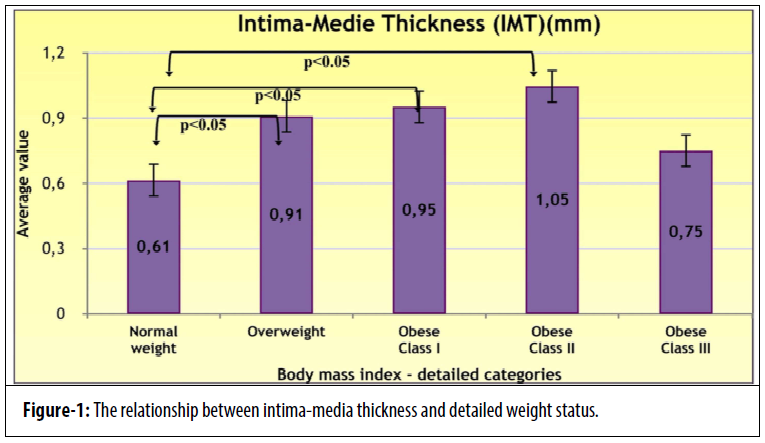 In patients with metabolic syndrome, mean ITM was significantly higher (p< 0.001). An analysis of the average values of the studied serum cytokines (hsCRP, E-selectin, MCP-1) in metabolic syndrome patients with carotid intima-media thickness ≥ 0.9 mm (a cut-off value that is recognized as a definite cardiovascular risk factor) evidenced the fact that these were higher among overweight and obese patients compared to normal weight patients, with a highly significant statistical difference (p<0.001) in the case of the highly sensitive C-reactive protein (NW-SM vs SM with IMT>0.9/ 15 vs 37) (Figure 2). 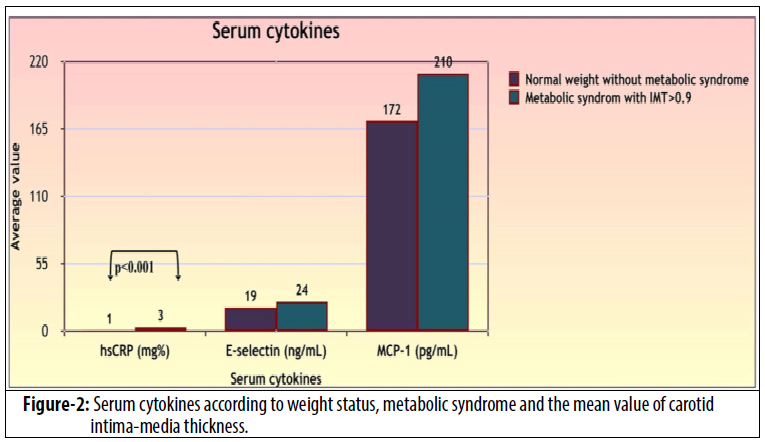 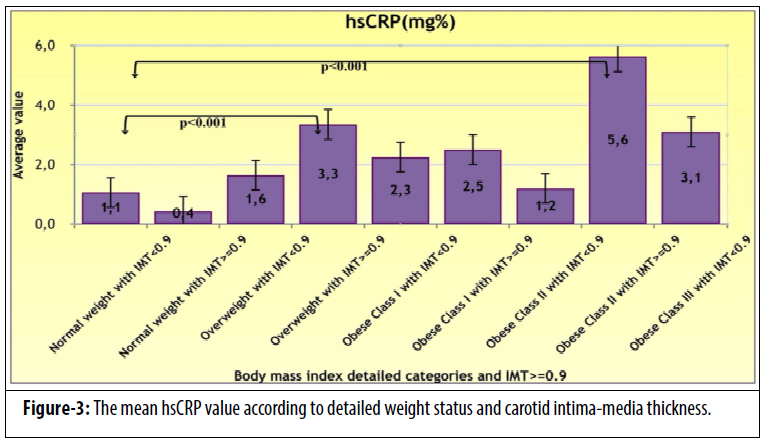 Also, the mean E-selectin value was significantly lower (p<0.05) in NW persons with IMT <0.9 mm than in O-I and O-II persons with IMT ≥ 0.9 mm. In the case of mon oc yte c h emo at tr ac t a nt protein-1 (MCP-1), although the same trend in conjunction with weight-gain was present, the differences were not statistically significant (p>0.05). With the e xce ptio n of OW patients, where there was a direct correlation (p<0.05) between TG levels and IMT, and an inverse correlation (p<0.05) between HDL and IMT, no statistically significant correlations were recorded (p>0.05).

Available literature describes the fact that IMT is increased in patients with metabolic syndrome, which is similar to our data.15-17 A recent study shows that in middle-aged adults, information provided by pulse wave velocity and IMT can be, to some extent, similar with regard to arterial injury or in indicating subclinical atherosclerosis.18 Data on the association of carotid IMT with traditional cardiovascular risk factors is contradictory. While some epidemiological studies have established that carotid IMT is a marker of subclinical atherosclerosis and is associated with classical risk factors for cardiovascular disease,19-21 other studies, like ours, failed to demonstrate a link between carotid IMT and lipid metabolism.22 The fact that no statistically significant correlations between average carotid IMT and lipid metabolism were recorded in the studied groups suggests that complex mechanisms are involved in the pathophysiology of early atherosclerosis, of which the most important is probably systemic inflammation. Although since 2003, the European Society of Hypertension has recommended for hypertension management the use of carotid IMT measurements in high-risk patients to help identify damage in the target organs.23 In 2010, the American Heart Association argued that the use of IMT in patients with intermediate risk is not satisfactory.24 This study demonstrates that overweight and obese people, especially those with more associated components of metabolic syndrome, should be evaluated for subclinical atherosclerosis, and the cheapest way would be the noninvasive measurement of mean carotid IMT, in accordance with earlier data.25 The study has its limitations as the MCP-1 gene polymorphism was not analysed. Also, a small number of morbidly obese subjects were included in the study because of the exclusion criterion that was dictated by a previous diagnosis of heart disease.

IMT was found to be increased in asymptomatic overweight and obese subjects, significantly higher in those with associated metabolic syndrome and high levels of hsCRP, as an indication of the presence of early, subclinical atherosclerosis.

Does determination of drug level in intoxicated patients offer an advantage in diagnosis, treatment, and reducing complications?