Assessment of pre-natal and post-natal attitude and practice of family members towards the birth of a female child among people residing in district East, Karachi

Objective: To assess the pre-natal and post-natal attitude and practice of family members towards the birth of a female child among people residing in an urban area.

Methods: The cross-sectional attitude and practice study was conducted from May 2018 to November 2018 in Jamshed Town and Gulshan Town in district East of Karachi, and comprised randomly chosen participants. Data was collected using a pre-tested questionnaire, and was analysed using SPSS 22.

Conclusion: Various demographic characteristics were significantly associated with pre-natal and post-natal attitude and practice of family members towards the birth of a female child.

The behaviour of the family members at the birth of a female child is extremely important because of its explicit implications not only on the female child and her family, but on society at large. Discrimination faced by women may lead to their lack of confidence and result in restriction of their self-expression and choices that they make in life. This along with family, social and work pressure has a definite impact on their mental and physical health.1 The discrimination that exists in our society can lead to adverse psychological and mental illness of the female population, as women in Pakistan are reported to be two to three times more likely than men to suffer from common mental disorders, which are accredited to socio-cultural rather than biological factors.2

This extremely patriarchal behaviour is prevalent in southeast Asia, especially in India and Pakistan, as these countries are overburdened with health issues, economic challenges and social problems, including inequality and high burden of diseases, and where obvious gender discrimination has led to a substandard status of women in society.3

Pakistan is a country where unfortunately a female child is subjected to discrimination in various forms. Be it the allocation of food, the opportunity of acquiring education, healthcare facilities etc. Within the household there is a differential in allocation of food and healthcare, where food that is superior nutritionally is offered to the males.4,5 This amounts to deliberate neglect and discrimination against the female child. Malnutrition is seen in children from the age of 1-5 years is 43% in males and 54% in females.6

It has been reported that male mortality is higher in the neonatal period of the life of a baby because at that time the biological factors are greater and are responsible for male deaths in this age group. In the post-neonatal period, which is dependent on care-giving facilities and financial and social factors, the rate of female mortality is almost twice that of males.5 Taking the first five years as a whole, the death rate of females is 74 per 1000, while the death rate of males is 50 per 1000.6 Other studies supported the trend for higher female mortality, particularly among those aged 5-48 months.4

Moreover, the fear of bearing a female child results in the mother opting for female feticide, which is defined as the deliberate killing of an unborn female foetus. Vadera BN et al. reported 20.51% women opting for female feticide.7 From an annual abortion rate of 27 per 1000 in 2002, it increased to 50 per 1000 in 2012.8 Although abortion is illegal in Pakistan, except when needed to preserve the life or health of pregnant women,8 with the advancement of prenatal gender diagnostic techniques and the desire to have male children, women resort to sex-selective abortion if they are aware of the fact that they are impregnated with a female child.9 Since there are legal restrictions on abortion in Pakistan, these barriers lead women to choose unsafe abortion techniques at the hands of untrained birth attendants called dais or other traditional methods, which results in majority of cases ending in post-abortion complications.8 There were estimated 2.2 million abortions in Pakistan in 2012; an annual abortion rate of 50 per 1000 women.8

Female infanticide, defined as the deliberate killing of a female foetus right after its birth, is also a cause for serious concern where in majority of the cases, the mother either chooses to go through with it or does it out of fear and pressure of the other family members.10

Furthermore, daughters are thought out to be financial burdens more than sons are because at the time of marriage the girls' family is expected to pay a large amount of dowry.3 It has been noted in previous studies that preference for a male child was more in mothers (81.0%) than in fathers (78.0%).11

Another major disadvantage faced by the female child is lack of access to education. Daughters are thought to be of no benefit to the family, therefore the focus is on the son only. Generally, they are married off at a very young age. They are also frequently deprived of their inheritance.1,6,7

Sex ratio is an important indicator of the status of gender equality in any country and it also defines the socio-economic and cultural behaviour of the masses. In Pakistan, the sex ratio is high and, according to Population Census 2017, men outnumber women and this trend is on the rise; there are 105+ men for every 100 women in Pakistan.12

In a study conducted about the reasons for preference of male children, results showed that majority of the people wanted a male child in order to continue the family lineage, while the second reason reported was to be looked after in old age by their sons, and financial support stood at number three to be the reason for wanting to have male children.11 Similar reasons were reported by Kansal R. et al.13

It is scientifically known that the gender of the baby depends on the father; whether he contributes the 'X' chromosome or the 'Y' chromosome.[6 In a study conducted in Punjab, Pakistan, it was reported that the women had to face the consequences of producing a female child and that they were often mistreated by their mothers-in-law and husbands.3

Women constitute about half of our population and, if given equal rights, they can contribute towards a more economically stable country. The need of the day is to create awareness about all these social issues and to intervene to give the female child the rights she must have. However, a thorough literature review did not reveal any study conducted previously in Pakistan on the subject. The current study was planned to assess the pre-natal and post-natal attitude and practice of family members towards the birth of a female child among people residing in an urban setting.

The cross-sectional attitude and practice study was conducted from May 2018 to November 2018 in Jamshed Town and Gulshan Town in district East of Karachi. After taking ethical approval from Baqai Institute of Health Sciences, Baqai Medical University, Karachi, the sample size was calculated. As no data was locally available, frequency of outcome factor was put at 50% with 95% confidence interval (CI) and 5% precision. Out of a list of 18 towns in Karachi, 2 were randomly chosen and two clusters were made of all the union councils (UCs) of the selected towns. From among them, two UCs from each town were randomly chosen. From each of the chosen UC 100 respondents from different households were selected by means of systematic random sampling with a random start after checking their eligibility. Those included were from families with at least one female child in the house and were willing to volunteer. Those who refused to give written informed consent were excluded.

The families were visited and after developing a rapport with them, data about their demographic profile, attitude and practice regarding pre-natal and post-natal birth of a female child was collected with the help of a questionnaire developed specifically for the study after a thorough literature review.7,9-11,13,14 The questionnaire was pre-tested on 5% of the sample size, and was checked both for face validity and reliability. Face validity was assessed by asking participants whether they were able to comprehend the questions asked and if the questionnaire appeared effective to them in measuring the study outcome. The questionnaire was then analysed for reliability by calculating Cronbach's alpha whose value came out to be 0.81 that indicated good reliability. At the end of data-collection, the participants were given necessary awareness about the disadvantages of gender bias and discrimination, and how it can adversely affect the females. 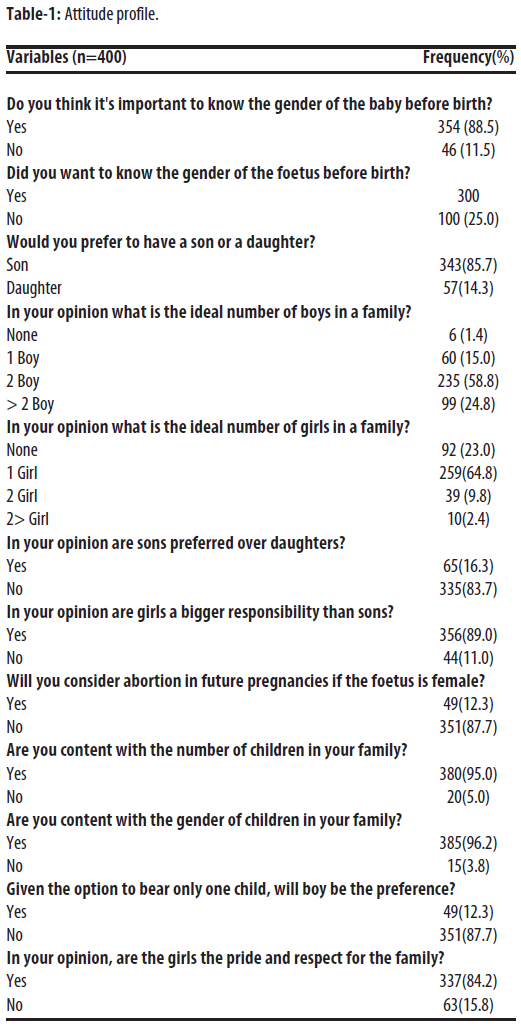 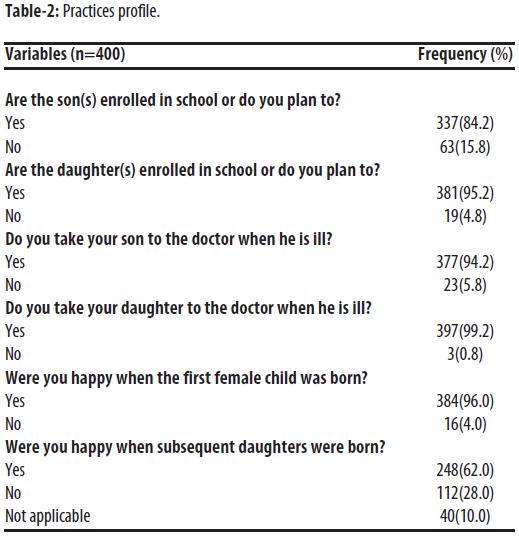 Among the demographic characteristics, gender (p=0.047), relationship with the child (p=0.032), monthly household income (p=0.013) and number of family members (p=0.04) had significant association with the consideration of abortion in case of female foetus. Participants with monthly household income of Rs26,000 and above were less likely to consider abortion in case of a female foetus than those with monthly income 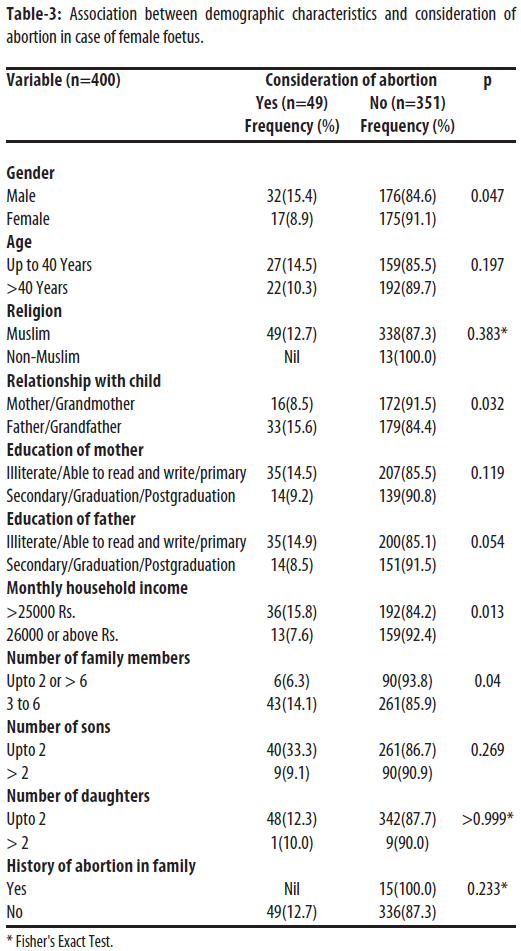 The education status of the mother (p=0.028) and the number of sons (p=0.015) had significant association with the reaction at the birth of the 1st female child (Table-4). 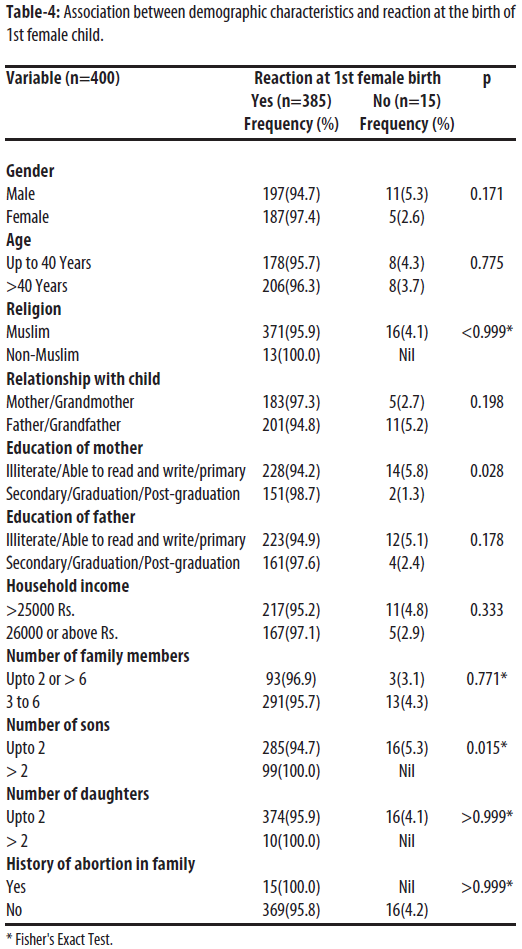 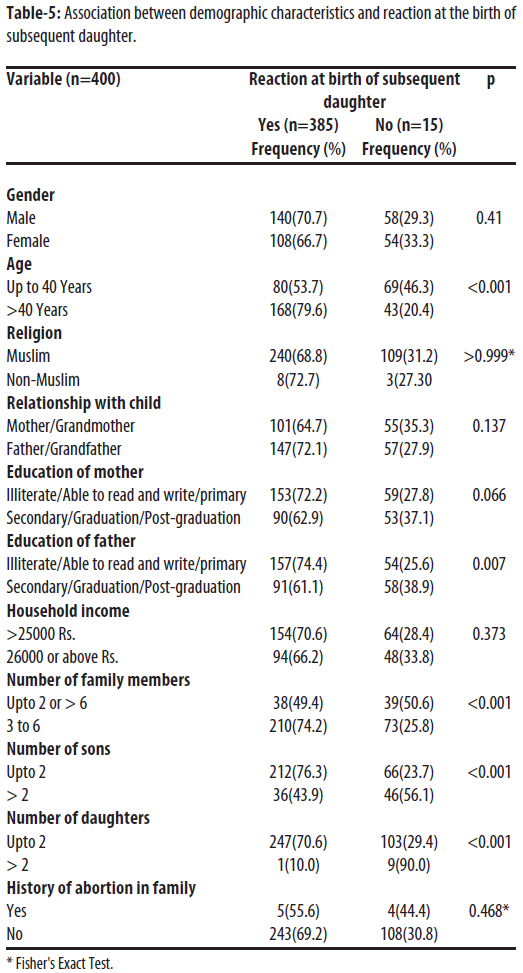 Results showed that 88.5% participants considered it important to know the gender of the baby before birth. Contrary to the findings, Srivastav S. et al. reported that only 35% participants perceived that pre-natal gender determination was justified.14 This difference could be attributed to the fact that in the latter study the participants were all female and belonged to a rural catchment area and 79.0% were illiterate.

The study results showed that 94.2% and 99.2% participants would take their sons and daughters respectively to the doctor if they were ill, whereas a 1990 study reported male admissions in clinic and hospitals to be 65% compared to female admissions of 35%.6 In a 1987 study, the medical expenditure on male children was 2.34 times higher than on the female children.5 It is acknowledged that the measures used to assess adequacy of female healthcare reception are different for all the studies, resulting in a difference of findings.

In our study, 62% participants accepted of being happy at the birth of a subsequent female child, whereas in an earlier study, none of the participants wanted a second female child.5 This difference could be attributed to the fact that the population of the latter study belonged to a higher socio-economic strata and preferred a smaller family size with at least a son or two.

Regarding the rest of the study findings, a meaningful comparison could not be made as a thorough search did not reveal any relevant published literature.

The prime limitation of the current study was self-reported assessment of the attitude and practices of the participants instead of observation-based assessment due to time constraint.

In the light of the study findings, focus should be on providing better educational opportunities and financial stability to the masses which would bring about a positive change in their attitudes and practices.

Various demographic characteristics were significantly associated with pre-natal and post-natal attitude and practice of family members towards the birth of a female child.

Disclaimer: The text is part of a Masters in Public Health thesis.

3.      Winkvist A, Akhtar HZ. God should give daughters to rich families only: attitudes towards childbearing among low-income women in Punjab, Pakistan. Soc Sci Med. 2000; 51:73-81.

11.    Parida SP, Panda SC, Panigrahi OP. A study on attitude of parents on gender preference and prenatal diagnostic test in an urban community of Sambalpur, a tribal district of India.Int J Contemp Pediatrics. 2017; 1:27-31.

Knowledge, attitude and perception survey of doctors regarding antibiotic use and resistance in Karachi, Pakistan

Awareness of sexually transmitted diseases among young adults of Karachi; a cross-sectional study