Objective: To determine empathy level among undergraduate medical students with respect to gender and the year of study.

Method: The cross-sectional study was conducted at the University College of Medicine and Dentistry, Lahore, Pakistan, from December, 2015, to January, 2016, and comprised undergraduate medical students of either gender in all the five years of their course. Data was collected using the student version of the Jefferson Scale of Physician Empathy. Data was analysed using SPSS 20.

Empathy is the ability to understand other people's experiences, emotions and feelings, and to communicate this understanding to others. It is a multidimensional construct comprising an affective element, having sensitivity and concern for other persons, and a cognitive element, to be able to understand feelings of other persons.1 Medicine is a profession for serving humanity. Empathy has been related to improved patient outcome in the practice of medicine, Physicians' empathetic behaviour may result in increased diagnostic accuracy and clinical competence,2 decreased emotional distress and improved quality of life and increased clinical outcome in patients.3 Moreover, empathy has a positive influence on physicians themselves. It has been found that physicians with higher empathy report lesser degree of burnout, and higher clinical competence ratings, and greater feeling of well-being.4 Thus, empathy, being an integral component of medical profession, needs to be studied in medical students.5 A mean empathy score of 115 was reported for American medical students,6 109.6 for Chinese,7 107.8 for Indian medical students,8 110.4 for Bangladeshi students, which was found to be higher than Japanese 104, Iranian 105.1 and Kuwaiti students 104.9 Empathy level has also been associated with gender. Various studies have reported higher empathy levels among females compared to male medical students.1 Several studies from the West have found a decrease in empathy level as students progressed from preclinical to clinical years.10,11 However, a few studies have also demonstrated stable empathy scores as students progressed through undergraduate medical school.1 Medical educationists all over the world have shown their concerns over this trend of decline in empathy among medical students, residents and physicians as seen in a large number of studies.12 Empathy is believed to be measurable and teachable, thus one of the challenges for medical educationists is to improve empathy among medical students for patients.9 Very few studies have been done in this regard in Pakistan, and even in those studies instruments used for measuring empathy levels were not specific to medical education. The current study was planned to determine empathy level among undergraduate medical students with respect to gender and the year of study.

The quantitative, descriptive, cross-sectional study was conducted from December, 2015, to January, 2016, at the University College of Medical and Dentistry (UCMD), Lahore, Pakistan, which is affiliated with the University of Lahore. After approval from the institutional review board, the sample size was calculated at 95% confidence level and 5% confidence interval (CI), anticipating the group difference of mean empathy score and standard deviations by gender, using the following formula: n= (u+v)2(S11 + S21) / (m1 - m2)2. n=sample size, u=1.64, v=1.96, S1=standard deviation in females (16.16), S2= standard deviation in males (19.9), m1=mean score in females (106.50), m2=mean score in males (100.79).8 Using probablistic systematic random sampling technique, the sample was raised by selecting 52 students from each of the five years of medical studies. Every third individual was selected out of 150 students in each batch. There were a few tools available to measure the empathy levels but none was specific to content or to patient care.13 As such, the Jefferson Scale of Physician Empathy (JSPE) was opted for and was used after taking permission from the Jefferson Institute.14 It was administered after taking informed consent from the subjects. The data was collected in the auditorium after taking permission from the administration and relevant heads of departments. It was done during the last months of their respective academic years, and the process was conducted by demonstrators who were not aware about the details of the study. JSPE was developed by the researchers at Thomas Jefferson University, Philadelphia, USA, and it was concluded in the pioneer study that "psychometric findings provided support for construct validity, criterionrelated validity (convergent and discriminant), and internal consistency reliability (coefficient alpha) of the scale".14 The psychometric properties of the scale were further confirmed in a meta-centric study by the researchers who concluded that"our empathy scale is a reliable and valid instrument for studying physician empathy."15 The JSPE has been translated into 56 languages and permission to use has been granted in 74 countries. The Thomas Jefferson University also provides online administration and scoring services.16 The student version of JSPE was specifically designed to assess empathy in medical students. There are 20 items in JSPE, and the answers are scored on a 7-point Likert scale. To minimise the confounding effect of a response pattern known as "Acquiescence Response style", positive wording is used for half the items (Nos: 2,4,5,9,10,13,15,16,17 and 20) and they are scored directly (1=strongly disagree, 7=strongly agree). The rest of the items (Nos: 1,3,6,7,8,11,12,14,18 and 19) are worded negatively and reverse-scored (1=strongly agree, 7=strongly disagree). Total score can range from 20 to 140, with higher scores indicating higher level of empathy. The scale takes about 10-15 minutes to complete.17 Studies have confirmed its psychometric properties as well as reliability and validity in addition to internal consistency reliability With Cronbach's alpha coefficient values of >0.80.18-20 As English is the medium of education in Pakistan, the scale was used in its original form, and no cultural issues were observed during a pilot study which was conducted with 20 undergraduate medical students who were not included in the actual study. Reliability of the pilot study had a Cronbach's alpha value of 0.854. The questionnaire was re-administered in the actual study after three months of the pilot study. Gender, age, and the study year were collected on the basis of self-reporting. Data was analysed using SPSS 20. Mean ± standard deviations (SDs) were reported for continuous variables, and frequencies and percentages for categorical variables. T test was usedto analyse the empathy levels stratified by gender. Analysis of variance (ANOVA) was used to establish statistically significant difference between empathy levels of different academic years. P<0.05 was considered statistically significant. 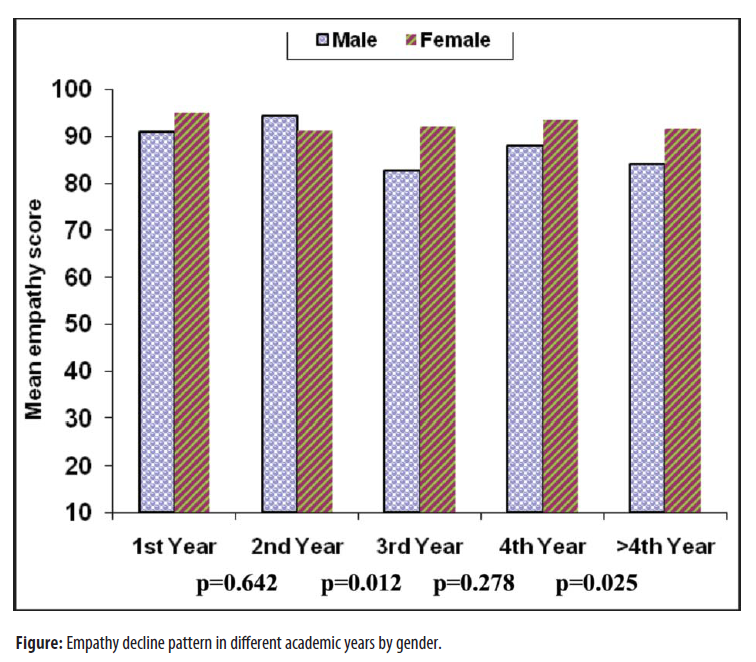 The overall mean empathy level was 90.63, which is quite low compared to other international studies that have reported scores in the range of 104-110.7-9,21 Differences may in part have been due to the different methods adopted for sample selection, and the way empathy is defined in different cultures.22 Medical institutions indifferent countries adopt different criteria for admission to medical schools, and follow different curriculum under different traditions and cultural norms which can all contribute to the differences in empathy score of students belonging to different countries.7,22 In the current study, the Final Year students scored quite low on empathy levels compared to First Year students. Although it is difficult to make causal interpretations on the basis of a cross-sectional study, it does open to debate the possibility that empathy levels might have decreased during medical training. Decline of empathy with increasing seniority among undergraduate medical students has also been reported in many international studies.11,23-24 Also, in the current study the most significant decline of empathy was seen in the Third Year, which is a pattern also reported by other studies.13 High workload of medical students associated with lack of sleep and inappropriate relaxation have also been found as causal factors of declining empathy. Distress and burnout affect medical student's level of empathy.25 Some of the common stressors in the life of a medical student or physician include workload, ethical conflicts, time constraints, exposure to patient suffering and death.26 One study has also suggested elitist thinking by medical students, and a feeling of belonging to a privileged class which is responsible for rational distancing of physicians from the patients.13 Private medical schools generally have low merits compared to public-sector schools, and further studies may explore the possibility that students who perform academically low also tend to have less empathetic attitude. Higher empathy scores were found among females compared to males. This is in agreement withvarious international studies that have also shown higher empathy score among the females.18 The difference in empathy score between the genders could be attributed to intrinsic factors, like biological characteristics, and extrinsic factors, like differences in expectations of gender role, manners in interpersonal care and social factors.10,22 In terms of limitations, the current cross-sectional study's findings may have been influenced by the cohort effect. A longitudinal study following the students annually throughout their stay at the medical school would have given more authentic results, but owing to time constraints, the current study did not follow that path. Also, the sample consisted of students of a single, private medical college, and care must be taken before generalising the results.

The overall level of empathy among undergraduate medical students was exceptionally low and declined further with seniority, indicating a lack of effective modules on empathy in the formal curriculum.

12. Loureiro J, Goncalves-Pereira M, Trancas B, Caldas-de-Almeida JM, Castro-Caldas A. Empathy in the doctor-patient relationship as viewed by first-year medical students: data on validity and sensibility to change of the Jefferson Measure in Portugal. Acta Med Port 2011;24(Suppl 2):431-42.

The factors affecting self-esteem, depression and body image of pregnant women in a state hospital in Turkey