Patients with diabetes mellitus (DM) are susceptible to various skeletal disorders, including osteopenia or osteoporosis, Charcot's arthropathy and the diabetic foot syndrome.1 Osteoporosis is the most important metabolic bone disease in DM patients. 2 Although the metabolic abnormalities of diabetes potentially affect bone metabolism, structure and mineral density, the extent of their contribution to the increase in fracture risk noted in individuals with type 1 and type 2 diabetes mellitus (T2DM) is still controversial. In addition to changes in bone metabolism, several other factors might be important, like the onset of diabetes in adolescence may result in a decreased peak bone mass, and the degree of bone-loss differs between type 1 and type 2 DM. In some studies, T2DM has been associated with an increase in bone mineral density (BMD). 3 Also, the presence of micro- and macro-vascular diabetic complications as a result of longstanding poor glycaemic control rather than long duration per se predicts low BMD in patients with type I DM. 4DM can affect bone through multiple pathways, including obesity, change in insulin level, higher concentrations of advanced glycation end-products in collagen, increased urinary excretion coupled with lower intestinal absorption of calcium, homeostatic response of parathyroid hormone (PTH) secretion, complex alteration of vitamin D regulation, reduced renal function, low insulin like growth factor-1 (IGF-1), microangiopathy and inflammation. 5All these factors affect bone metabolism in diabetic patients, but with different magnitudes according to the DM type. Besides the usual neurovascular complications, both male and female patients with type I DM have low bone mass, which may lead to an increased incidence of fractures. 6 Individuals with type I DM have double the risk of any fracture and 4-5 times higher hip fracture risk compared to those without diabetes. 7 Higher fracture risk in type I DM is evident in childhood and extends throughout the life span, affecting both genders alike. Type I DM is characterised by modest deficits in BMD that account for some, but not all, of the increased fracture risk. 8 The current study was planned to assess BMD in adult patients with type 1 DM compared to healthy controls, and to identify the factors that may be associated with change in bone mass.

The prospective cross-sectional, case-control study was conducted at the Centre for Endocrinology and Diabetes in Al Rasafa, Baghdad, Iraq, from October 2017 to March 2018 and comprised patients with type 1 DM and healthy controls. The study was approved by local ethical committee and consent was obtained from the participants for the study. Those included were type 1 DM patients of either gender aged 20-37 years with duration of disease >5 years. Patients with liver or kidney disease were excluded and so were those who were pregnant, taking medications known to interfere with bone metabolism, like loop diuretics, steroid or anticonvulsants, those with malabsorption, hyperthyroidism or hypogonadism, and patients with spontaneous or traumatic bone disease. Healthy controls were matched for age and gender, and the same exclusion criteria were used. Detailed information from both the groups regarding medical, medication and social history was obtained. Height, weight, waist circumference (WC) were noted and body mass index was calculated using the standard equation. Sensorimotor neuropathy was assessed by 10-gram monofilament (pressure), 128Hz tuning fork (vibration), pinprick and ankle jerk. Retinal status was assessed by dilated fundus examination which was carried out by a single ophthalmologist. BMD of lumbar spine for both the groups were measured using dual-energy X-ray absorptiometry (DEXA) (Osteosys Dexxum 3) and the measurement was done by a single technician and the reports were assessed by a radiologist. Subjects were considered to have normal BMD if T score was more than or equal to -1; osteopenia if T score ranged from -1 to -2.5; and osteoporosis if T score was more than or equal to -2.5. Serum calcium, creatinine, phosphorus, liver function test (LFT) (Cobase c 311), vitamin D, PTH (Cobase 411), and thyroid function test (Vidase Biomerax) were noted in both groups, while glycated haemoglobin (HbA1c) (Cobase c 111), and coeliac screen (Epson LX 300)were done only for the patients issuing enzyme-linked immunosorbent assay (ELISA). Data was analysed using SPSS 25. Continuous variables were presented as mean } standard deviation (SD). Independent sample t test was used for comparing the mean values of variables between the patients and the controls. Chi square test was used for discrete variables and percentages. P<0.05 was considered statistically significant. 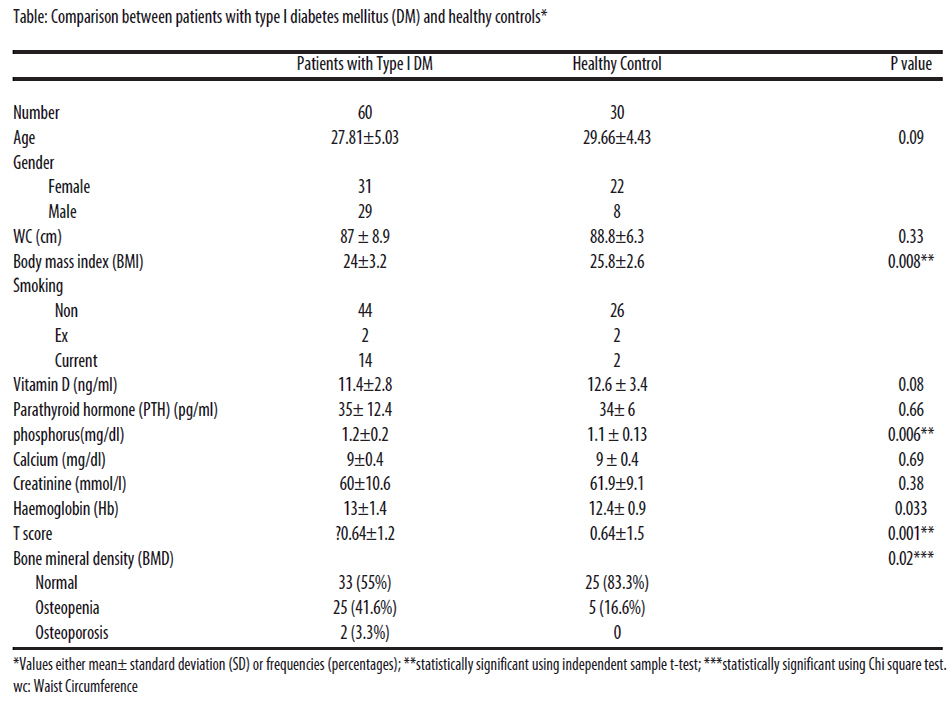 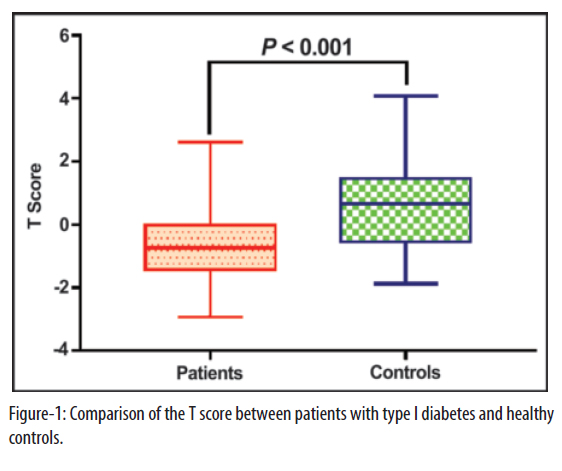 Stratification of patients with type I DM and healthy controls according to overweight, obese and normal BMI status showed statistically significant difference between the groups regarding the T score (Figure-2). 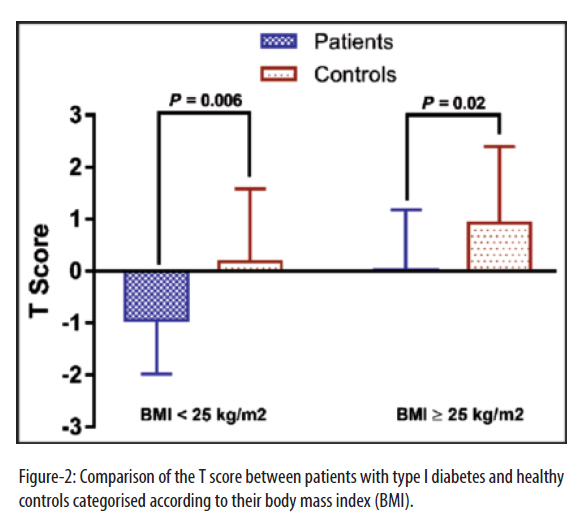 The findings of the study are in line with literature. 9,10 Using DEXA scan of lumbar spine, around 45% of our diabetic subjects had low bone density. However, some studies reported normal 11 or even increased spine BMD. 12 Such contradictory results can be explained by the heterogeneity of patients, study protocol, sample size, selection of the controls and differences in the techniques used to assess BMD. Nevertheless, there is agreement that about 40-50% diabetic patients have decreased BMD. 13Moreover, research in children showed that bone-loss can be present at the time of diagnosis. 14 This may suggest that bone-loss in type I DM patients may not be viewed as part of the constellation of known micro-vascular complications of diabetes, but rather to the outcomes related to diabetes progression. 13 The possible mechanisms responsible for low bone mass in type I DM include inflammatory state, local IGF-1levels, amylin deficit, and non-enzymatic glycation of type 1 collagen with subsequent advanced glycation endproduct formation. 15 Previous studies suggested increased bone resorption, while others proposed loss of bone formation as the cause of low BMD in type I DM. 16 High bone turnover that occur in patients with type I DM compared to the general population can be attributed to hypomagnesaemia, decreased level of vitamin D and negative protein balance, and hormonal imbalance. Moreover, there were no gender differences in BMD in patients with type I DM and this is consistent with a previous study. 15 The current study shows that patients with type I DM had significantly higher serum phosphorus level compared to the controls. These results are in line with a study 4 which described these changes as a state of functional hypoparathyroidism in patients with type I DM. Functional hypothyroidism manifests by the inability of PTH to respond to hypocalcaemic stimulus and is indirectly detected by an increase in the tubular reabsorption and in increase in serum level of phosphorus compared to the non-diabetic population. On the other hand, a study found that calcium and phosphorus levels were not significantly different between the control and patient groups. 17 The current study found no association between BMD and diabetes control, represented by HbA1c, suggesting that diabetes control does not play a major role in the pathogenesis of bone-loss in type I DM. Similar observation was noted in a number of studies, which also found that HbA1c was not predictive of BMD in type 1 DM. 18 However, this finding is limited by the fact that there is only one reading of HbA1c for each patient and the result reflect short-term glycaemic control and it would not be expected to reflect cumulative bone damage measured by BMD. 19 Nevertheless, if the relationship between diabetes and bone-loss was only related to hyperglycaemia, one would expect a similar incidence of osteoporosis in patients with type IDM and those with T2DM, but osteoporosis is rather an uncommon feature of T2DM. 20A study found that better glycaemic control, as reflected by lower HbA1c, was associated with better BMD. 21 The differences in glucose control and patient compliance between each study sample are probably responsible for the discordance between the findings. The current study showed statistically significant association between duration of DM and low bone mass. However, previous studies revealed controversial results. For example, one study reported an inverse correlation between the duration of diabetes and lumbar BMD in adolescents. 22 In contrast, a study that followed patients for <3 years, did not find an association between DM duration and BMD. 23 Similarly, a study on teenage and post-teenage women also found no association between DM and BMD. 10The results of the current study show that vitamin D level was low in both diabetic and control groups, yet it was statistically not significant when comparing the two groups. This is consistent with a study which reported that 50% of patients with type I DM had deficient levels of vitamin D, while 45.8% had insufficient levels. 24 The role played by vitamin D in the intestinal absorption of calcium and in the regulation of bone turnover is well established. However, our study showed that vitamin D level did not influence the BMD. Studies indicate that 12 months of intervention with the active form of vitamin D, in patients with type 1 DM, is not effective in modifying bone turnover markers. 25 The slight difference in BMI between the diabetic and control groups is not expected to affect the significance of the difference in BMD values between the two groups because when we categorised the patients and the controls to normal and overweight status, there still was significant difference in BMD between the two groups. A study presented the same result. 4 Another study explained these results by leptin which had emerged as a potential factor responsible for the protective effects of fat on the bone tissue as it increases osteoblastic differentiation and may reduce osteoclast genesis. An increasing number of epidemiological studies have found an increased risk of fractures at the hip and other sites. 26 This suggests that the lower bone density observed in our type I diabetic subjects is clinically important, and that regular assessment of bone health could be relevant in all patients with type 1 DM. The current study had its limitations. It studied a young population and the sample size was small when a larger sample could possibly have strengthened the findings. In addition, the study did not measure bone turnover markers which would have possibly improved understand of the mechanism of reduced BMD. Finally, DEXA was done only for the spine and did not include the hip and the femur as these were not available at the study site.

Type 1 DM and reduced BMD were significantly associated. The duration of diabetes and BMI were important in the occurrence of low bone mass, while diabetes control had no effect on BMD.

Bone mineral density of both genders in Type 1 diabetes according to bone composition. J Diabetes Complications 2006;20:302-7.