Objectives: To determine the role of homocysteine in women with recurrent miscarriages of unknown causes.
Methods: The case-control study was conducted at the Department of Obstetrics and Gynaecology, Al-Yarmouk Teaching Hospital, Baghdad, Iraq, from January 2015 to January 2016, and comprised non-pregnant women who were divided into two groups, with Group 1 having those with history of recurrent miscarriage, and control Group 2 having those with good obstetrical history. Detailed history was taken and the subjects underwent full general, gynaecological exam along with ultrasound and laboratory tests, including total serum homocysteine, B12 and folate. The findings were compared between the two groups using SPSS 20.
Results: Of the 100 women, there were 50(50%) in each of the two groups. The homocysteine level in Group significantly exceeded that of control Group 2 (p<0.001). Both B12 and folate levels in Group 1 decreased significantly in comparison with Group 2 (p<0.001). Homocysteine level showed significant reverse correlation with folate levels in Group 1 (p<0.0001). B12 showed the highest sensitivity 96% and specificity 98% in the detection of cases, while homocysteine showed sensitivity of 84% and specificity 80%.
Conclusions: Serum total homocysteine, B12 and folate levels were significantly associated with recurrent miscarriage in women with unknown causes.
Keywords: Recurrent miscarriage, Hyperhomocysteinemia, Vitamin B12, Folate. (JPMA 69: S-26 (Suppl. 3); 2019)

Although about one-fourth of all recognised pregnancies result in miscarriage, not more than 5% of women experience two successive miscarriages, and only 1% have three or more.1 Recurrent miscarriage, defined as three consecutive pregnancy failures, is estimated to affect ~1% of all couples trying to conceive. 2  In many clinical situations, it is defined as two or more consecutive spontaneous miscarriages. 2  The prevalence of miscarriage is, however, unknown as it frequently occurs before the woman knows about her pregnancy. It is estimated that a high number of pregnancies are fated to be lost than continue to reach the term. 3   Recurrent miscarriage might be caused by numerous factors, but the underlying problem often remains undetected. 3  Although thorough efforts have been made to identify the underlying mechanisms, the aetiology of miscarriage can be explained in only ~50% cases. The known causes of recurrent miscarriage include chromosomal and metabolic abnormalities, uterine anomalies, and immunological factors. 3,4 Even though recurrent miscarriage is a heterogeneous condition and the progress in identifying causative factors has been slow, the repetitive pregnancy losses in some couples and the high percentage of unexplained recurrent miscarriage indicate that there are specific underlying causes yet to be found. 5-7 Homocysteine (Hcy) is a sulfhydryl-containing amino acid produced from the metabolism of the essential amino acid methionine (Met). 8  Hcy has been identified as a contributor to fundamental mechanisms of four disease: thrombosis, oxidant stress, apoptosis, and cellular proliferation. 9  Folic acid, vitamin B6 and vitamin B12 are key enzyme cofactors required for normal Hcy metabolism, and their deficiencies lead to elevated Hcy levels. 9  Hyperhomocysteinemia (HHcy) has been cited as an emerging risk factor for several diseases such as arterial and/or venous thrombosis, adverse pregnancy outcome, congenital malformations and vascular dementia. 10  Some inherited disorders might cause HHcy. Generally, people with these defects are barely mildly affected. However, in rare case some defects in genes produce a severe form of HHcy called Homocystinuria which raises the risk of blood clots, mental retardation, bone abnormalities and visual problems. 10  The diagnosis of HHcy is made by measuring the level of total Hcy in the blood. 11  According to the American Heart Association (AHA) advisory statement, Hcyconcentration range is normal 5-15μmol/L, intermediately-elevated 31- 100μmol/L and severely-elevated >100μmol/L, and are essentially pathognomonic for the presence of an inborn error of Hcymetabolism causing homocystinuria. 11  The fundamental aim of treatment is to decrease blood Hcy levels to normal. The treatment regimen may include supplements of folic acid, vitamin B12 and/or vitamin B6; this combination ensures that Metsynthase cofactor stores are adequate, thereby promoting normal tetrahydrofolate metabolism and re-methylation of Hcy to Met. 12  Moreover, anticoagulant medications, such as aspirin, clopidogrel, heparin, low-molecular-weight heparin, or warfarin might be added to prevent blood clots. 12  Patients with the grave form of HHcy are often treated with loading doses of vitamin B6 or betaine, with restriction of dietary consumption of Met. 12  The current study was planned to determine the role of Hcy in women with recurrent miscarriages of unknown causes.

The case-control study was conducted at the Department of Obstetrics and Gynaecology, Al-Yarmouk Teaching Hospital, Baghdad, Iraq, from January 2015 to January 2016, and non-pregnant women who were divided into two equal groups, with Group 1 comprising cases of recurrent miscarriages and Group 2 having controls with good obstetric history. After approval from the institutional ethics committee and the Arab Board Council, the sample was raised using convenience sampling method from among those attending the outpatient department (OPD) during daytime from Sunday to Thursday. Those included were non-pregnant women aged 18-45 years with a history of at least three consecutive early pregnancy losses from the same partner, or non-pregnant women with a good obstetric history who had delivered at least one child. In all subjects, a period of at least 6 months had elapsed from the end of the last pregnancy, and there had to be about one week to go for the expected first day of the next menstrual period in order to to perform the required testing procedures while minimising the possible hormonal effect on Met-Hcy metabolism. Patients with a recognizable cause of recurrent miscarriage, such as anti-phospholipid syndrome, uterine anatomical or pathological abnormalities and incompetent cervix were excluded. Also excluded were patients with history of chronic illness, like hypertension, ischaemic heart disease, diabetes, renal or liver diseases; patients on oral contraceptives or on medications that might interfere with Met-Hcy metabolism, such as methotrexate, sulfonamides, nitrous oxide, antacids; smokers; and those having had tonic supplementation within the preceding six months. After getting informed verbal consent from all the participants, detailed history was taken regarding medical, surgical, gynaecological and obstetrical aspects. It was followed by general examination that included vital signs and Body mass index (BMI), as well as full gynaecological examination. Laboratory investigations included complete blood count (CBC), fasting blood glucose (FBG), serum cholesterol, liver function test (LFT), renal function test, and, antiphopspholipid antibodies screen. Ultrasound examination was done to exclude uterine anatomical or pathological abnormalities. Venous blood sample of 7ml was taken from each woman after an overnight fasting. From it, 1ml sample was taken on dipotasiumethy lenediaminetetraacetic acid (EDTA) for the determination of ABO blood group, Rhesus (Rh) factor and CBC. From the remaining 6ml, sera were separated and used for the determination of FBG, cholesterol, creatinine, aspartate aminotransferase (AST) and alanine aminotransferase (ALT). The blood sample in the dry plain tube was then sent to the laboratory within 30 minutes of collection after properly labelling the tube with the name of the person along with the date and time of collection. The samples were centrifuged at 3000rpm for 5-7 minutes, and the sera were kept -20 to -70°C for the determination of vitamin B12, folate and total Hcy. Folate and vitamin B12 levels were measured by electrochemiluminiscence immunoassay (ECLIA) and by a competitive test using a natural folate-binding protein (FBP) respectively (Roche Laboratories, Mannheim, Germany), according to the manufacturer's instructions according to which normal value of Vitamin B12 was 74- 700 pg/ml and that for folate was 3-16 ng/ml. Fluorescence polarisation immune-accumulate was used for total Hcy level determination in the blood sample (ADVIA centaur XP immune-accumulate system, Siemens Healthcare Diagnosis) with normal range set at 5-15μmol/L, as per the manufacturer's guideline. Data was analyzed using SPSS 20. Two-tailed independent t-test was used to compare the continuous variables between the groups. Pearson's correlation was used to assess the correlations of serum Hcy with other parameters of both the groups. Receiver Operator (ROC) curve was used to assess the sensitivity and specificity of serum total Hcy, B12 and folate tests in the prediction of recurrent miscarriages. P<0.05 was considered significant. 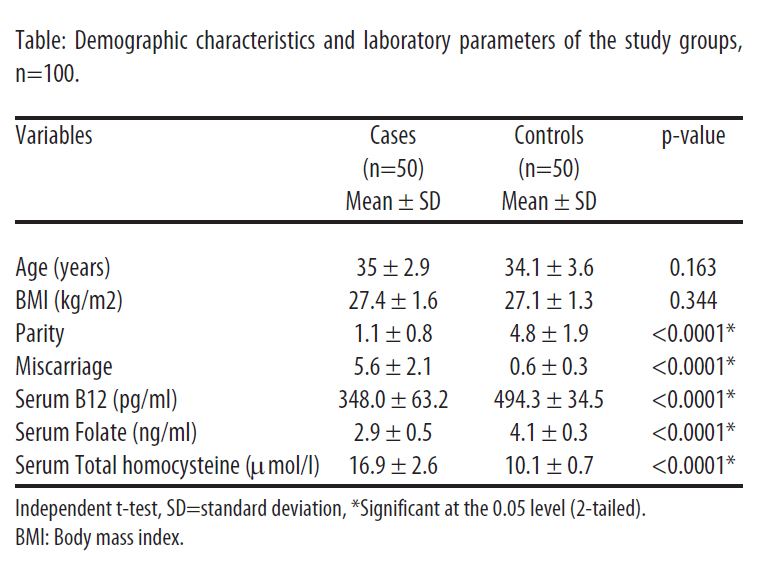 There was no significant correlation of serum Hcy in Group 2 with demographic features and laboratory parameters (p>0.05). In Group 1, the only significant correlation of serum Hcy level was with serum folate level (p<0.0001). Concerning serum Hcy level, the most accurate cut-off point was 12.01μmol/l, and every woman with higher level was predicted to suffer a current miscarriage. This cut-off point revealed 82% accuracy, 84% sensitivity and 80% specificity with highest area under curve (AUC) of 0.887, which means the ability of serum Hcy to correctly identify recurrent miscarriage possibility was 88.7% (Figure-1). 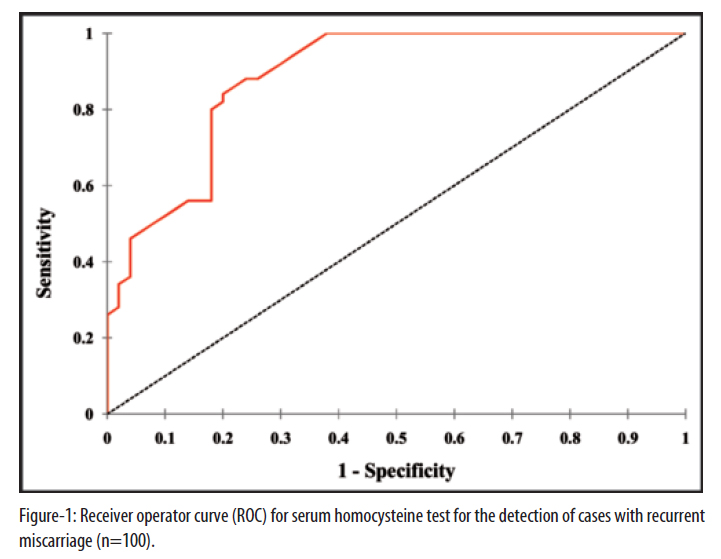 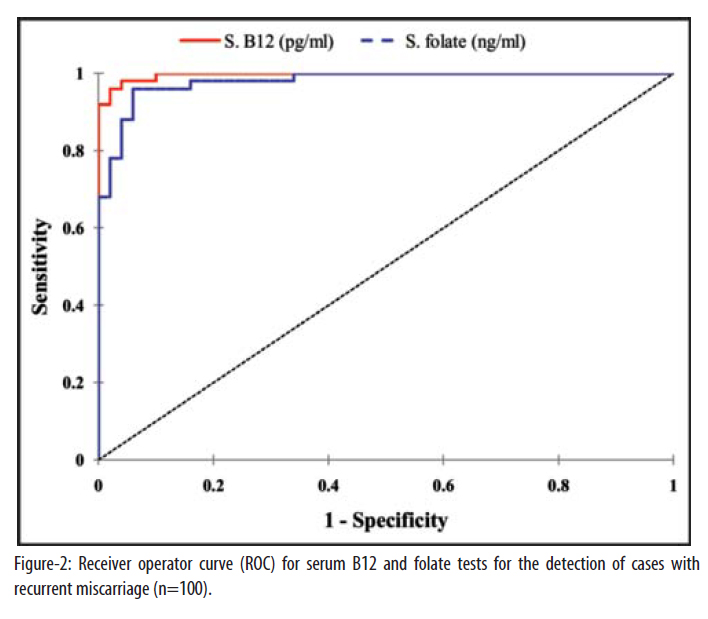 Recurrent miscarriage is a frustrating event for both mothers and healthcare providers as half of the cases are idiopathic. 9  Several studies have increasingly investigated the possible causes in the few past years, and have come to the conclusion that thrombophilic status is to be blamed as it may affect placental circulation. 13  The current study showed that more than one-fourth of the cases had no previous normal pregnancies. The group of recurrent miscarriage cases was compared with control group of women with almost similar age group and matched BMI. This was in line with a study carried out in Spain. 14  A study in Egypt also had similar results. 15  History of term pregnancy was significantly higher in the control group, while miscarriage history was significantly higher among the cases. This expected finding was also reported by studies in Italy10  and Egypt. 16  In the present study, the average level of serum B12 and folic acid in the cases was generally lower than that for the controls. These finding were similar to studies in Egypt and Poland. 15-17 In contrast, a study in Spain reported no such difference. 14  This variation might be due to laboratory errors, confounding hormones, metabolite outcomes or gynaecological conditions. The current study found that Hcy level in the case group was significantly higher compared to the control group, which is in line with literature.10,14-17 Serum Hcy level in the case group was inversely correlated with serum folate in the current study and this also matched earlier results. 16,17 This relation was evident even in healthy subjects as revealed by a double-blind randomised trial in Norway. 18  The above studies proved that methylenetetrahydrofolate reductase (MTRFR) polymorphism, which is supported by even a low dose of folic acid supplement, had an effect on changing Hcy level.13,18 The current study also tested the validity values for the serum levels of Hcy, B12 and folate as indicators for patients with tendency for recurrent miscarriage, and the results showed significantly high and dependable validity values. In the current study, the cut-off value for Hcy was 12.01Umol/L, with sensitivity 84%, specificity 80%, positive predictive value (PPV) 80.8%, negative predictive value (NPV) 83.3%, and overall accuracy 82%. The validity values for serum B12 and folate were higher than that for Hcy as they were highly sensitive and specific at their cutoff values for recurrent miscarriage detection. These findings was also in agreement with a study done in India which showed Hcy sensitivity 80.7% and specificity 70.6% at a cut-off value of 12Umol/L. 19  A study in Egypt reported a cut-off value of 15Umol/L with Hcy level sensitivity 73% and specificity 42%.15 These differences are thought to be the result of the defined cut-off value, patients' preparation for the test as well as laboratory method differences between the studies. The cut-off value in the study from Egypt resulted in classifying 42/45 (93.3%) recurrent miscarriage cases with high Hcy level. 15  The difference in sample size was also blamed for the difference in cut-off value. The present study showed the role of increased Hcy level as well as the decrease of B12 and folate levels in recurrent miscarriage cases with unknown causes and high differences with the control group. Serum Hcy and folate levels inversely correlated in the cases with recurrent miscarriage. The high positive validity values for serum Hcy, B12 and folate level tests build the trust with their results for defining potential recurrent miscarriage cases.

Serum total Hcy, B12 and folate levels were found to be significantly associated with recurrent miscarriage in women with unknown causes.