Objectives: To evaluate the effect of proton pump inhibitors on glycaemic indices in patients with type 2 diabetes mellitus.
Methods: The case-control study was conducted at the National Diabetes Centre, Mustansiriyah University, Baghdad, Iraq, from January to April 2018, and comprised type 2 diabetes patients and non-diabetic healthy controls. The subjects were divided into three groups: Group A had controls on proton pump inhibitors; Group B had patients treated with metformin 850 g/day; and Group C had patients treated with metformin 850 g/day plus proton pump inhibitors. Gastrin serum levels, lipid profile, glycaemic indices and blood pressure changes were measured in the groups. Data was analysed using SPSS 20.
Results: Of the 100 subjects, 60(60%) were patients with a mean age of 54.98}4.22 years, while40(40%) were controls with a mean age of 50.69}4.34 years. Group A had 40(40%) subjects, while Group B and Group C had 30(30%) each. Proton pump inhibitors improved glycaemic indices and lipid profile in the patients 9p<0.05) while increasing gastrin serum levels which were significantly correlated with reduction in glycated haemoglobin, fasting blood glucose and augmentation of β-cell function (p<0.05 each).
Conclusion: Proton pump inhibitors improved glycemic indices and metabolic profile in type 2 diabetes patients via augmentation of gastrin serum levels.
Keywords: T2DM, Gastrin, Proton pump inhibitors. (JPMA 69: S-31 (Suppl. 3); 2019)

Type 2 diabetes mellitus (T2DM) is a metabolic disorder characterised by hyperglycaemia and insufficient insulin action.1 T2DM and insulin regulation are affected by different gastrointestinal hormones, one of which is gastrin. Gastrin is a peptide hormone secreted from G cells in the gastric antrum, pancreas and duodenum, and is responsible for the secretion of hydrochloric acid (HCL). Gastrin binds specific cholecystokinin B (CCK-B) receptors. 2 Gastrin receptors are expressed in foetal pancreatic β- cells for a short period, but these receptors are not found in adult pancreatic β-cells. 3 It has been reported that gastrin does not affect adult pancreatic β-cells due to lack of gastrin receptors, but an animal model study illustrated that gastrin plays a potential role in the neogenesis and suppression of apoptosis of pancreatic β-cells by unknown mechanism. 4 Moreover, gastrin acts synergistically with glucagon likepeptide (GLP-1) in the regulation of pancreatic β-cells even in transgenic mice for T2DM animal model. Thus, gastrin has protective effect on pancreatic β-cells mainly in combination with GLP-1. 5 In spite of the potential effect of gastin in the augmentation of pancreatic β-cell mass, it is not suitable for treatment of T2DM as it has a short duration, is ineffective orally and has potential gastric side effects. Proton pump inhibitors (PPIs) might be an alternative pathway for increasing endogenous gastrin. 6 PPIs comprise a group of drugs which inhibit gastric HCL secretion through irreversible inhibition of hydrogen potassium (H/K) ATPase enzyme at gastric parietal cells. Omeprazole is the prototype of PPIs which is regarded as an essential medicine. 7 Furthermore, there is a negative feedback regulation of gastric HCL and gastrin secretion; when gastric HCL increases, it causes negative inhibition on gastrin secretion. PPIs inhibit this negative feedback, leading to increase in gastrin serum levels which improve pancreatic β-cell function and glycaemic indices in patients with T2DM. 8The current study was planned to evaluate the effect of PPIs on glycaemic indices in newly-diagnosed patients with T2DM treated with metformin.

The case-control study was conducted at the National Diabetes Centre, Mustansiriyah University, Baghdad, Iraq, from January to April 2018, and comprised T2DM patients and healthy controls. After permission was obtained from the institutional ethics committee in line with the Declaration of Helsinki, 9 and informed verbal consent from the participants, the subjects were divided into three groups: Group A had controls on PPIs; Group B had patients treated with metformin 850 g/day; and Group C had patients treated with metformin 850 g/day plus PPIs. Patients included were aged 40-62 years who had been diagnosed with T2DM according to the criteria of American Diabetes Association (ADA) 10 and were on metformin therapy. Those with psychological diseases, neurological diseases, hypothyroidism, end-stage kidney disease, hepatic dysfunction, connective tissue disorders, history of intake of dopamine receptor agonist, malignant disorders and sexual dysfunction were excluded. The controls were included on the basis of matching characteristics without T2DM. Body mass index (BMI) was measured using te standard weight (kg)/height (cm2) method. Blood pressure (BP) measurements were taken by digital sphygmomanometer at supine position. Pulse pressure was systolic BP (SBP) - diastolic BP (DBP), and mean arterial pressure (MAP) was measured using the formula: MAP = (SBP+2DBP)/3. 11 After overnight fasting, 10ml of venous blood was taken from each patient. The blood was centrifuged at 3000rpm and the sera were stored at -20°C for further analysis. Fasting blood glucose (FBG) was measured by glucose oxidase method. 12 Lipid profile was estimated by specific enzymelinked immunosorbent assay (ELISA) according to the kit's instructions. Low-density lipoprotein (LDL) was determined by modified Friedwald formula. 13 Fasting insulin was measured by ELISA method (insulin human ELISA kit, Catalogue No: KAQ1251). Insulin resistance (IR) and β- cell function of pancreas were determined by homeostatic model assessment (HOMA- 2). Glycated haemoglobin (HbA1c) was measured by specific kit (human glycated haemoglobin AIi1c, GHbA1c, MBS702379). Gastrin serum level was measured by ELISA kit method (Human Gastrin I ELISA Kit, GAST, ab133033, USA). All kit procedures were done according to the instructions on the respective kits. Data analysis was done using SPSS 20, and was presented as mean} standard deviation (SD), and unpaired student t test was used to determine the differences. Analysis of variance (ANOVA) followed by Benferroni post-hoc test was used to compare results of different groups. The level of significance was set at p<0.05. 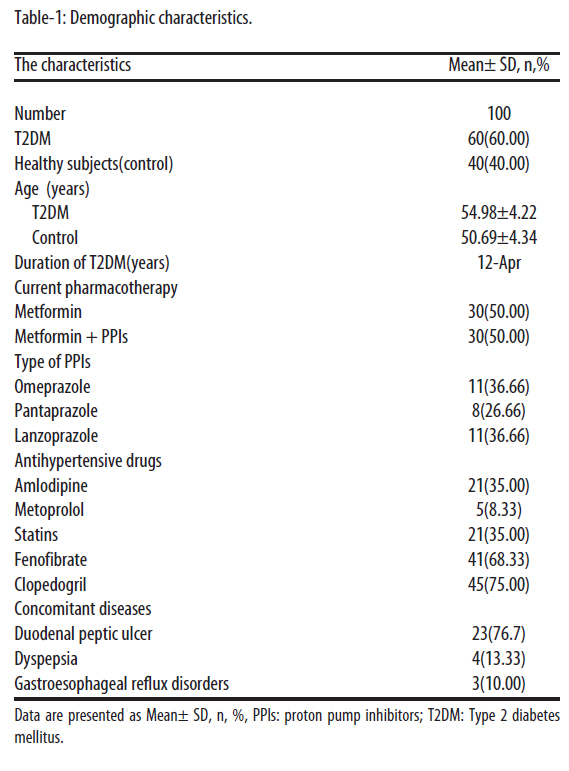 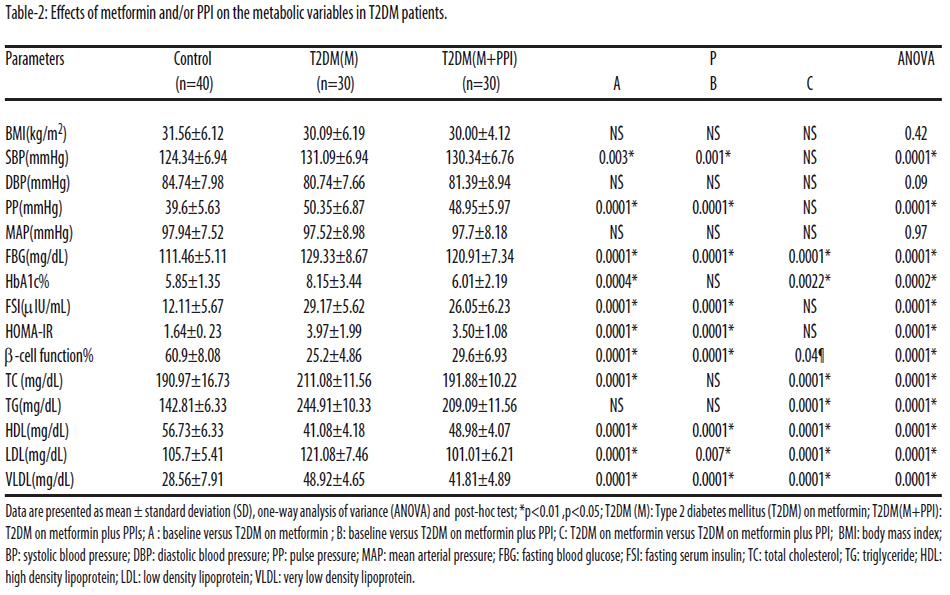 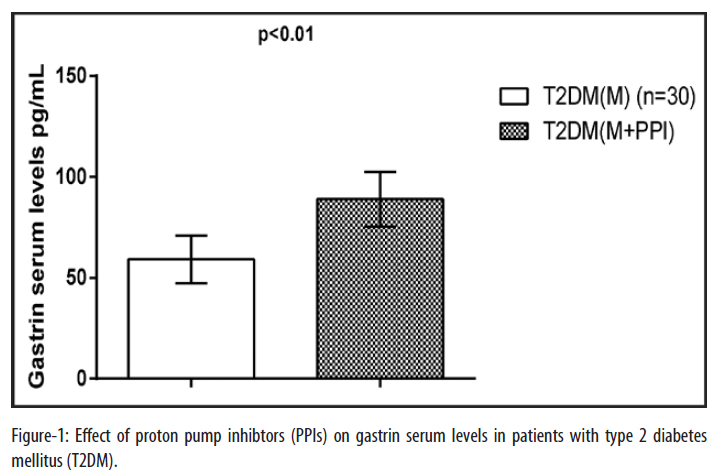 There were non-significant differences in gastrin serum levels regarding different types of PPIs (Figure-2). 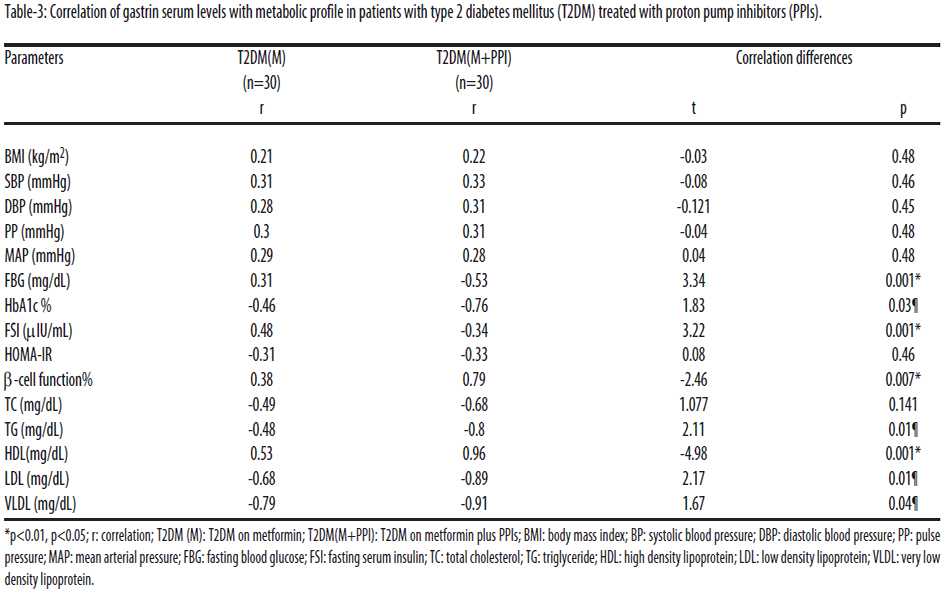 The traditional concept of gastrin hormone as being only local regulator of gastric HCL secretion is now considered out of date since gastrin hormone and its receptors are widely expressed outside the gastrointestinal tract (GIT) and participate in different body functions. 14 The present study illustrated insignificant effect of PPIs on BMI and BP changes in T2DM patients, which is in contrast to study by Czworng et al., which demonstrated that long term treatment with PPIs led to weight-gain due to modifications of energy expenditure and gut flora. 15 Besides, PPIs impair bio-activation of dietary nitrite by gastric HCL, so prolonged therapy with PPIs may lead to endothelial dysfunction and hypertension. 16 Insignificant effects of PPIs in our study might relate to the small sample size, irregular therapy and insufficient doses of PPIs. Moreover, PPIs with metformin in T2DM patients improved lipid profile significantly compared to T2DM patients on metformin only. This finding corresponded with Barkas et al. study that illustrated significant lipidlowering effect of PPIs due to the inhibition of cholesterol metabolism, potentiation of statin effect and activation of hepatic X receptor which links with the suppression of lipoproteins. 17 The present study disclosed significant improvement in glycaemic indices in T2DM patients who received PPIs as revealed through significant reduction in FBG, HbA1c with augmentation of β-cell function compared to T2DM patients not receiving PPIs. These findings are inconsistent with a study that demonstrated a significant role of PPIs in the regulation of glycaemic indices. 18 Our findings illustrated significantly high gastrin serum levels in T2DM patient receiving PPIs, but differential effect of PPIs on gastrin serum levels were insignificant as revealed in a recent study by Grong et al. 19In the present study, elevated endogenous gastrin levels were significantly correlated with reduction of HbA1c, FBG and improvement of pancreatic β-cell functions. There are different mechanisms of PPIs in the regulation of glycaemic indices; one of the important ones is augmentation of endogenous gastrin serum levels. In an animal model study, PPIs improved pancreatic β-cell functions by increasing circulating gastrin by unclear mechanism. 20In addition, pantoprazole increased gastrin serum levels by 1.5 fold which led to significant amelioration of glycaemic indices compared to vonoprazone which increased gastrin levels up to 6-7 folds but produced insignificant effect on glycaemic indices. Thus, the elevation of endogenous gastrin level is not the main pathway of PPIs in the amelioration of glyacemic indices. 21 Also, PPIs inhibit ghrelin secretion, thereby reducing food intake and energy homeostasis which could be a possible mechanism explaining the improvement effect of PPIs on glycaemic indices. 22 Besides, PPIs inhibit central feeding centre and the induction of satiety due to the stimulation of hypothalamic cholecystokinin B(CCK-B) receptors by gastrin directly or indirectly through vagus nerve stimulation. 23 Recently, Cao et al., confirmed that PPIs activated secretion of GLP-1 from intestinal L-cells which play a potential role in the regulation of insulin section and improvement of glycaemic indices. 24 Concerning drug-drug interaction between metformin and PPIs, Flory et al. showed that PPIs did not affect metformin pharmacokinetic and pharmacodynamics profiles. 25 Previously, Nies et al. illustrated that PPIs inhibited intestinal metformin absorption through the inhibition of organic cation transporter system. 26 Therefore, there is controversy regarding the precise mechanism of PPIs in the regulation of metabolic and glycaemic indices. As such, large prospective studies are recommended to disclose the actual mechanism of PPIs. The current study had some limitations, like a small sample size and having been done at a single-centre. Also, the effects of other diabetic pharmacotherapy in relation to PPIs were not evaluated. Despite these limitations, however, the study confirmed the modulating effect of PPIs on the metabolic profile in patients with T2DM.

Acknowledgment: We are grateful to all staff members in the Department of Clinical Pharmacology and Therapeutics for their cooperation and support.
Disclaimer: None
Conflicts of Interest: None
Source of Funding: None