Objective: To investigate the effect of blood group ABO antigens on the risk of vaginosis.
Methods: The cross-sectional study was conducted at the Department of Obstetrics and Gynaecology, Al-Yarmouk Teaching Hospital, Baghdad, Iraq, from April 2016 to June 2017. Two vaginal swabs and 1ml of stimulated saliva from women aged16-46 years were collected. The first swab was used for direct wet smear examination, while the second swab was cultured on aerobic
and facultative anaerobic cultures on appropriate media. SPSS 25 was used for data analysis.
Results: Of the 269 patients with a mean age of 30.7}6.2 years, 52(19.3%) were positive and 217(80.7%) were negative for ABO antigen. The duration of vaginosis symptoms were observed after 7-13 days in both positive and negative groups (p=0.24).The main symptom in women with positive ABO was vaginal pain, while it was a foul smelling vaginal discharge and itching in women with the negative status (p=0.0001).Single bacterial species growth was obtained from 32(61.5%) positive patients and 81(37.3%) negative patients.
Conclusion: ABO secretory status could increase defence against microbial vaginosis.
Keywords: ABO antigens, Saliva, Microbialvaginosis. (JPMA 69: S-50 (Suppl. 3); 2019)

Vaginal discharge is a symptom caused by either physiological or pathological reasons. The physiological causes are the most common and usually are clear, non offensive and non-pruritic.1 Pathological causes include infections, such as bacterial vaginosis, candidiasis, trichomoniasis, and non-infective, like foreign body, cervical ectopic, and malignancy. 2  About half of vaginosis cases are bacterial which is due to excessive growth of mixed anaerobes that replace normal vaginal lactobacilli. Bacterial vaginosis occurs spontaneously in both sexually active and inactive women. 2,3 Acute vulvo-vaginal candidiasis may be a common cause of vaginosis in about 80% of infections, which is caused by overgrowth of Candida albicans. It is most common in women aged 20- 30 years and in pregnancy as oestrogens promote its growth. 4  Moreover, Trichomonas (T.) vaginalis is the least cause of vaginosis which is exclusively sexually transmitted and accounts for 3% of the infected women. The word 'secretor' is used for an individual who secretes ABO blood group antigens in body fluids such as saliva, sweat, tears, gastric juice, semen, urine, etc., and it is completely independent of the blood type. While the individual who has no ability to secrete those antigens in body fluids is called a 'non-secretor'. 4,5 The absence of these antigens increase the susceptibility to a number of diseases. The secretion of ABO antigens into saliva and mucus offers a degree of protection against parasitic and bacterial infections. Indeed, different studies have illustrated the influence of ABO antigens on diverse diseases as 68% of those having the disease were nonsecretors. 6  A study showed that the absence of ABO antigens in saliva increases the susceptibility to Neisseria (N.) gonorrhoea infection, 7 as well. One study demonstrated that the secretory status plays an intrinsic role in the prevention of Helicobacter (H.) pylori infection as ABO antigens improve mucosal innate immune system. 8  Besides, one study found that the absence of salivary ABO antigens increases the susceptibility to urinary tract infections (UTIs). 9 The current study was planned to investigate the effect of blood group ABO antigens on the risk of vaginosis.

The cross-sectional study was conducted at the Department of Obstetrics and Gynaecology, Al-Yarmouk Teaching Hospital, Baghdad, Iraq, from April 2016 to June 2017. After approval from the institutional ethics committee, and informed written consent from the subjects, two vaginal swabs and 1ml of stimulated saliva were collected from married women aged 16-46 years who complained of symptoms akin to vaginosis. Data was gathered regarding age, marital status, period of marriage, number of children, education level, occupation, period of infection, and main symptoms. The first vaginal swab was used for direct microscopically wet smear examination. It was smeared upon a microscope slide by placing the specimen on a glass slide and mixedwith normal saline. 10  The second vaginal swab was cultured on aerobic and facultative aerobic on appropriate media. At the end of the incubation period, all the isolates were diagnosed according to well-known established microbiological methods based on morphological features, gram-staining method and biochemical tests. 11  The stimulated saliva sample was collected into a sterile glass jar. The saliva from each woman was boiled for 20 minutes, centrifuged at 2000 rpm for 10 minutes and the supernatant was stored briefly at 20°C till it was tested for the presence of ABO antigens by using the haemagglutination inhibition assay. Briefly, the test used the anti-A, B and D sera. It is based on the principle that if ABO antigens are present in the saliva, they will bind with antibodies that present in the anti-sera added. So, the antibodies are not available in the mixture (saliva and antisera) to agglutinate with red blood cell (RBC) suspension and the subject is a positively ABO antigen secretory and vice versa. 12,13 Data was analysed using SPSS 25, and was presented as frequencies, percentages, mean, standard deviation (SD) and range. The significance of difference in qualitative data was tested using Pearson Chi-square test with the application of Yate's correction or Fisher Exact test whenever applicable. Statistical significance was set at p<0.05. 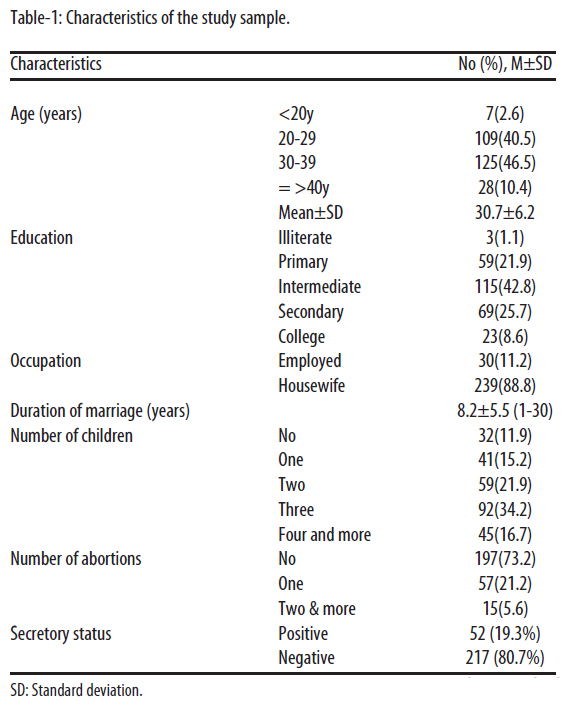 The duration of vaginosis ranged 3-60 days. The higher proportion was in the range of 7-13 days in both positive and negative ABO secretory status, but the difference with 1-6 days and >14 days range was not significant (Table-2). 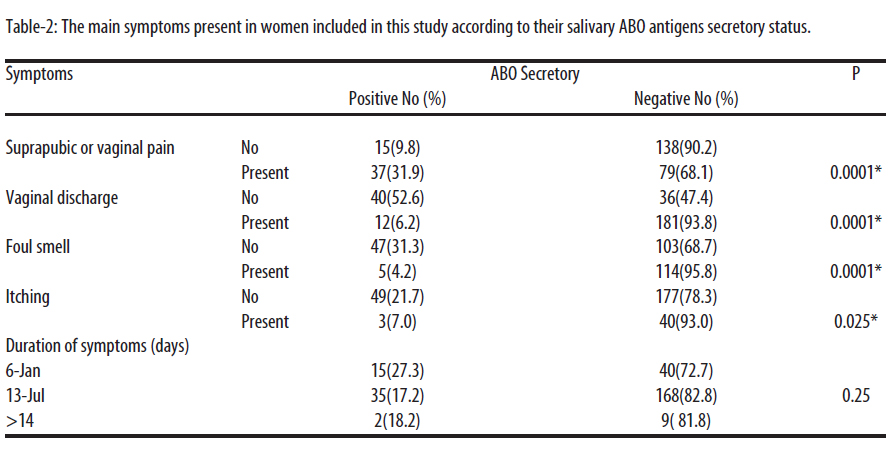 Supra-pubic or vaginal pain was the main symptom in women with positive ABO status, while foul-smelling vaginal discharge and itching were observed in women with negative status (P<0.05) (Table-3). 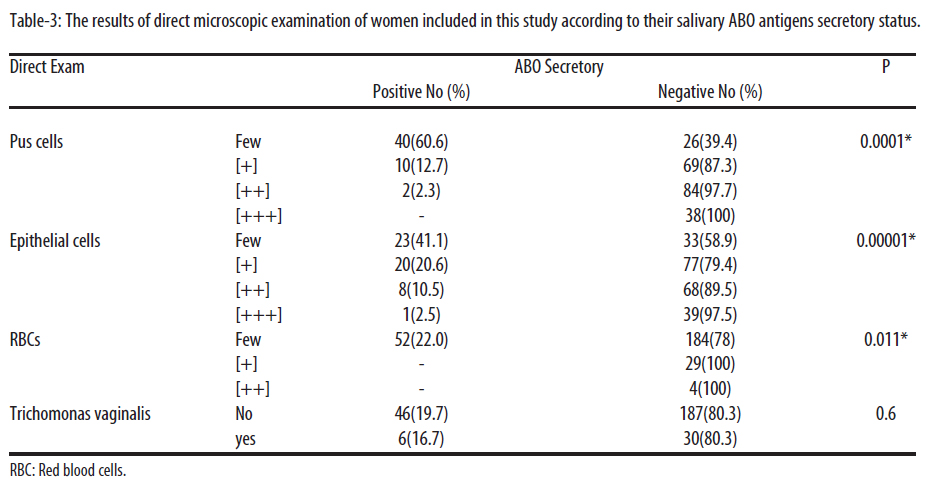 Direct microscopic examination indicated the presence of RBCs followed by pus and epithelial cells in both positive and negative ABO secretory status (p<0.05). The number of these cells was higher in patients with negative status (Table-4). 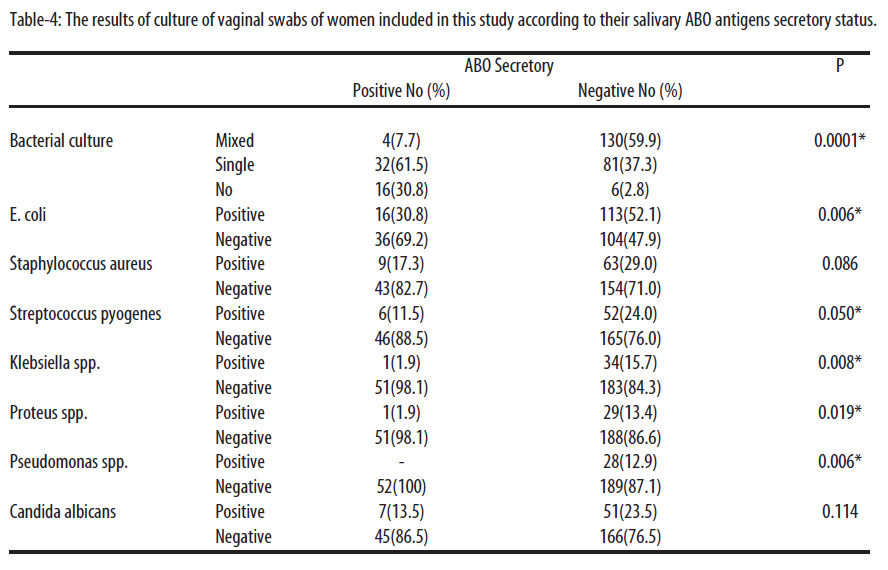 The current study explored the relationship between vaginosis and ABO antigens, demonstrating the important role of these antigens in resistance against vaginal infections. These were obvious in the severity of symptoms, numbers and types of inflammatory pus and epithelial cells, and/or infectious organisms. Even the duration of the infection was affected by the presence or absence of these antigens. These findings are in agreement with a study that disclosed a significant correlation between the absence of ABO antigens in the saliva and the risk of vaginosis. 14  Moreover, oxidative stress and bacterial infections are more pronounced in patients who lack ABO antigens in body fluids as oxidative stress affects the salivary content of protective antigens. 15,16 ABO blood group antigens are glycol-sphingolipids that contain a lipophilic portion, ceramide, which is attached to a variable carbohydrate chain extending out from the cell surface and plasma membrane. 17,18 These are important antigens which are found on the cell surfaces of erythrocytes, epithelial cells of the urinary, vaginal, gastrointestinal, buccal cavity, as well as respiratory tracts. 19  As a result, this will affect the attachment capacity of infectious organisms and may lead to minimising the manifestation associated with these pathogens. Disease risk factors associated with secretor status may result in part because many viruses, bacteria, fungi and protozoa initiate infection by non-covalent binding to certain mucosal cell surface carbohydratebinding proteins. 20  Many previous studies have demonstrated an increased risk of infections in nonsecretors compared to the secretors.9 There are some materials extracted from uro-epithelial cells of the nonsecretors may consider for the increased binding of E. coli and lead to their increased susceptibility to recurrent UTI. 21  These findings were similar to our results which showed that the primary infective bacteria were E. coli in ABO non-secretors. Several studies have suggested that the increased susceptibility to different diseases in nonsecretors may be elucidated by genetic factors influencing the density and/or specificity of bacterial receptors available to mediate colonisation of their cells. 22 This might be attributed to the uro-epithelial cells taken from non-secretors that show enhanced E. coli adherence when compared with cells from the secretors. 23  Also, there is evidence suggesting that ABO non-secretors have lower levels of immunoglobulin-G (IgG). 24  Other
researchers considered IgA concentrations to be significantly lower in the non-secretors than in the secretors. 25

Secretion of ABO antigens in the saliva and other body fluids in women increased defence mechanism against microbial vaginosis. Also, the presence of these antigens minimised the severity of symptoms in women with vaginosis.

Acknowledgment: We are grateful to all the staff members at the Department of Clinical Microbiology for their cooperation and support.
Disclaimer: None.
Conflicts of Interest: None.
Source of Funding: None.