Risk factors in children with febrile seizures and their iron status

Objectives: To determine the risk factors for patients with febrile convulsions and to assess their iron status.
Methods: The case-control study was conducted at the Central Child Teaching Hospital, Baghdad, Iraq, from May 1 to August 31, 2017, and comprised febrile patients aged 6-72 months admitted after presenting with axillary temperature ≥38oC. Those who got fits along with fever were declared the cases, while those with just fever were considered the controls. Venous blood samples were taken for complete blood count, biochemical tests, and for serum ferritin, serum iron and total iron binding capacity. Data was analysed using SPSS 23.
Results: Of the 80 patients, 40(50%) were in each of the two groups. Respiratory tract infection was the commonest cause of fever in 29(58%) cases and 21(42%) controls (p>0.05). The cases were significantly younger in age (p<0.05). Also, there was significantly low haemoglobin level, low packed cell volume, low serum iron, higher total iron binding capacity and low serum ferritin in the case group (p<0.05). Iron deficiency anaemia was found in 17(73.9%) of the cases compared to 6(26.1%) among
the controls. The mean serum ferritin of the cases was lower compared to the controls (p=0.001).
Conclusions: The risk of febrile seizure in iron-deficient children increased in the presence of risk factors.
Keywords: Iron deficiency anaemia, Febrile convulsion, Risk factors. (JPMA 69: S-22 (Suppl. 3); 2019)

Febrile convulsions are seizures that occur at age 6-60 months with a temperature of >38°C that are not the result of central nervous system (CNS) infection or metabolic imbalance. Various factors have been described in the pathophysiology of febrile convulsions, like elevated brain temperature altering many neuronal functions; fever promotes pyrogen interleukin-1β (IL1β) synthesis; hyperthermia-induced hyperventilation and alkalosis that provokes neuronal excitability and seizure pathophysiology; and iron deficiency, as iron is essential for a number of enzymes involved in neurotransmitter synthesis.1,2 The effect of iron deficiency in the developing brain may be through the altered development of hippocampus neurons, delayed maturation of myelin and alterations in synaptic neurotransmitter systems which include glutamate, gamma-amino butyric acid (GABA), norepinephrine, dopamine and serotonin which may be responsible for pica. 3-5 The current study was planned to determine some of the risk factors for patients with febrile convulsions and to assess their iron status.

The case-control study was conducted at the Paediatric Emergency Unit (PEU) of the Central Child Teaching Hospital, Baghdad, Iraq, from May 1 to August 31, 2017, and comprised of febrile patients aged 6-72 months, who were admitted with fever with axillary temperature >38°C. Those who had fits along with fever and with no evidence of CNS infection or metabolic disturbance, regardless of the number of such attacks were considered cases while the rest with just fever and no fits were considered the controls. The subjects were selected using random sampling. The study was approved by local ethical committee and consent was obtained from the participants for the study. All patients with CNS infections, developmental delay } neurologic deficit, chronic multisystem disease, chronic haematological disorder, recent history of blood transfusion and history of iron therapy were excluded. Age, developmental milestones, residence, history of previous any febrile convulsion, feeding history and family history of febrile convulsion or epilepsy were noted using a predesigned questionnaire. The socio-economic status (SES) of the family was determined according to the occupation, education and income of the parents, and the SES was categorised into good, fair and poor.6 Thorough physical examination was done including axillary body temperature at the time of admission, and vital signs. Normal axillary temperature was considered 36.5°C to 37.5°C (97.8°F to 99.5°F). 7 Venous blood samples were taken for complete blood count, biochemical tests, serum ferritin, serum iron and total iron binding capacity (TIBC). Haemoglobin (Hb) levels were considered normal according to age groups; 0.5-1.9yr >11g/dl; 2-4yr >11g/dl; and 5-7yr >11.5g/dl. Patients were considered irondeficient if Hb levels were below these specific levels which carried no gender difference. 1 Data was analysed using SPSS 23. Chi-square and Fisher exact tests, and two-sample T test were used, and p<0.05 was considered significant. 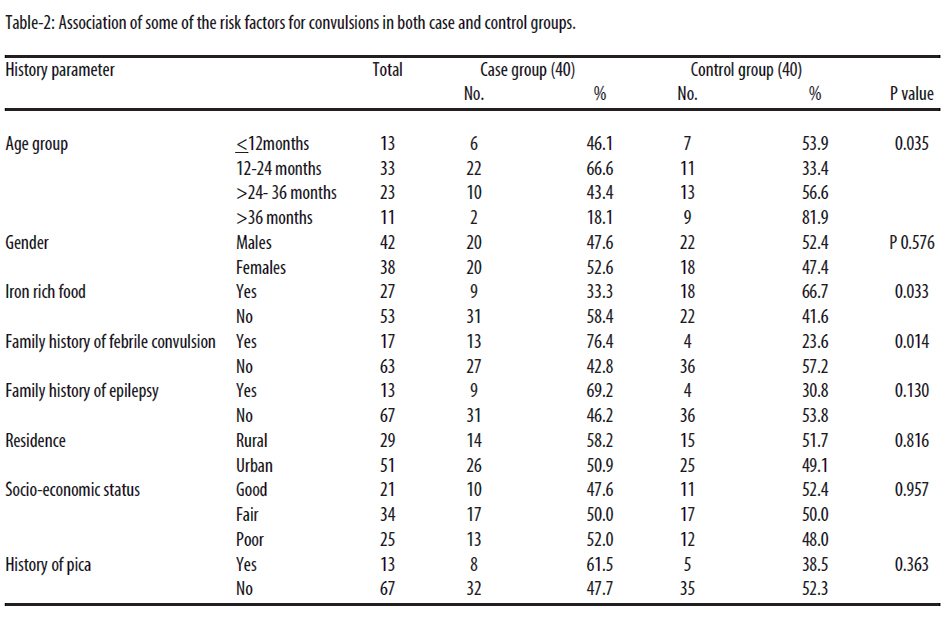 There was significant difference in baseline temperature measured on admission between the groups (p=0.001). Febrile convulsions in the cases were simple type 28(70%) and complex type 12(30%). There was significant low Hb, low packed cell volume (PCV), low serum iron, higher TIBC and low serum ferritin patients among the cases (p<0.05)), while the mean corpuscular volume (MCV) and red cell distribution width(RCDW) was not significantly different between the groups (p>0.05) (Table-3). 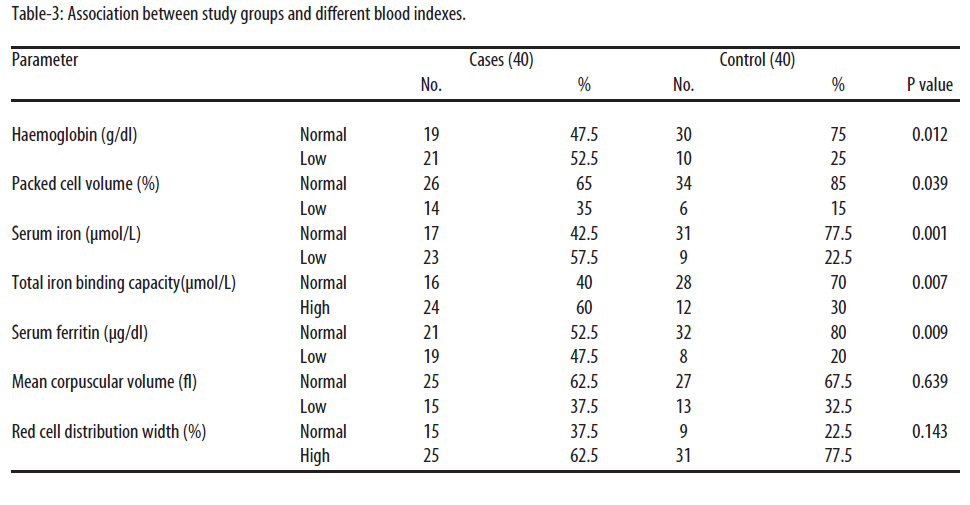 The sample in the current study was well selected since the causes of fever had no impact on convulsions (p=0.231), which is similar to a study showing febrile convulsions more likely to occur with respiratory illnesses compared to viral gastrointestinal illness.8 Case group patients' mean age was 20.90}7.66 months, which is similar to earlier studies.9,10 Cases were younger than controls and it was as seen in an earlier study. 11 There was equal gender distribution (50%) of cases unlike a study reporting 71.76% boys, and 28.24% girls. 9 This was perhaps because of the small sample size. Positive family history of febrile convulsion in cases was 32.5%, which agrees with a study reporting 22%,12 as this disorder is inherited as an autosomal dominant trait.1 Family history of epilepsy showed no significant difference, which disagrees with a study where 47.5% cases had positive family history of epilepsy compared to 16% controls. Again, the finding may be explained by the small sample size. 13 There was a high frequency of urban case group patients(65%) because our hospital is located in an urban area with no significant difference regarding residence, which agrees with the study reporting 73%.12 It stresses the fact that the residence had no impact on the occurrence of febrile seizures. No significant difference in SES terms in the current study was also in line with literature.10 The significant difference in mean axillary body temperature (p=0.001) agrees with a study which showed mean temperature of cases as 39.2}0.7°C compared to the control group's 38.90}0.49°C.14 Also, 70% of case group patients had simple febrile convulsion and 30% had complex convulsions, which agrees with earlier studies.9,12 Hb level was <11g/dl in cases (p=0.012), and this agrees with a study (61.95%).10 The mean Hb level in cases was lower than that in controls (p=0.009), which was similar to earlier findings. 14  Serum iron was low in 57.5% cases compared to 22.5% controls (p=0.001), which agrees with some studies 9,10  and disagrees with others. 13  Ferritin is an iron-containing protein that functions in the body as an iron-storage compound. Plasma ferritin provides a sensitive, specific and reliable measurement for determining iron deficiency at an early stage. 15 Regarding ferritin level, low levels brings the seizure threshold down, as iron is important for the functioning of various enzymes and neurotransmitters present in the CNS. Fever may worsen the negative effects of low ferritin level on the brain and, therefore, triggers seizures easily. 15  Low serum ferritin was more in cases (47.5%) compared to the controls (22.5%) (p=0.009), which agrees with reported findings. 10,13 Serum ferritin is an acute-phase reactant protein that increases non-specifically in response to any febrile illness. Fever was present in all patients in the two groups; therefore differences in ferritin concentration between the two groups cannot be explained unless iron deficiency anaemia is present. 16  TIBC was high in 60% cases, which agrees with studies reporting 53.26% and 64.4% respectively)9,10 and disagree with others showing significantly low TIBC in cases group, 13  which can be managed by routinely giving iron supplements after 6 months of life. Among the cases, 4(25%) had iron-deficiency anaemia with single attack of convulsion compared to 13(54%) having iron-deficiency anaemia and recurrent attacks of convulsion. We did not find any study on this parameter to compare our results with. This finding may indicate that iron may have a role in having more than one fit.