A placenta accreta spectrum (PAS) disorder isa term used by the International Federation of Gynaecology and Obstetrics (FIGO) consensus and Royal College of Obstetricians and Gynaecologists (RCOG) guidelines to include both adherent (placenta accreta) and invasive placental disorders(placenta increta and percreta).1,2 It is associated with significant maternal morbidity and mortality.3 Its incidence has increased substantially from 0.8 per 1000 deliveries in the 1980s to 3 per 1000 deliveries in the past decade; a phenomenon attributed to the rising global caesarean section (CS) rate. 4 A meta-analysis of five cohorts and 11 case-control studies reported a summary odds ratio (OR) of 1.96 (95% Confidence Interval [CI]: 1.41-2.74) for PAS after a CS and the risk of PAS increases with the number of previous CS. 5,6Most PAS cases occur in women with risk factors and can be antenatally diagnosed. The strongest risk factor is placenta praevia, especially when associated with multiple prior CS deliveries. 7,8The primary modality for the antenatal diagnosis of placenta accrete in case of clinical suspicion is grey scale obstetrics onogram with sensitivities for the diagnosis reported to range 77-97%.9,10Magnetic resonance imaging (MRI) may be useful in antenatal diagnosis, but it is not clear whether MRI alone improves the accuracy of diagnosis over ultrasound. 9 PAS disorder managed by a multidisciplinary team (MDT) and delivered at 34-35 weeks' gestation had a significantly lower rate of emergency surgery. However, many cases progressed to 36 weeks of gestation without complications and the issue remains controversial. 11,12The current study was planned to evaluate the prevalence and management strategies of PAS disorders at a tertiary teaching hospital.

The retrospective cross-sectional study was conducted at Al-Yarmouk Teaching Hospital, Baghdad, Iraq, and comprised record of PAS patients between January 2014 and December 2017. After obtaining approval from the institutional ethics committee, records of PAS patients having either adherent or invasive condition were identified from the hospital's database. Variables noted were maternal age, parity, number of CS, inter-pregnancy interval, scheduled versus nonscheduled operation, MDT versus non-MDT  management approach, weeks of gestation at the time of diagnosis and at the time of intervention, antenatal versus intraoperative diagnosis, caesarean hysterectomy versus conservative approach surgery, estimated blood loss (EBL), transfusion of blood and blood products, intraoperative complications including vascular, bladder, ureteral and bowel injury, postoperative complications including respiratory distress syndrome (RDS), admission to respiratory care unit (RCU) and wound infection, second operation, maternal postoperative length of hospital stay (LOS), and early neonatal mortality rate. In all cases the diagnosis depended on trans-abdominal ultrasound with Doppler done antenatally or just before the operation in emergency situation. MRI was used in selective cases only. The components of MDT were obstetrical anaesthesia consultant with expert theatre team, expert obstetric consultant to discuss surgical choices and to assess the need for involvement of other surgical services, like surgeon, urologist and vascular surgeon, haematologist, neonatologist, radiologist with focussed expertise in obstetric imaging and abnormal placentation, as well as expert theatre nursing staff. In general, timing depended on patient condition. The definite and recommended treatment was planned preterm delivery at 36 weeks of gestation by caesarean hysterectomy usually under general anaesthesia while leaving the placenta in situ to overcome the possibility of severe haemorrhage when trying to remove adherent placenta. Conservative management was resection of that portion of the uterine wall that included the morbidly adherent placenta, followed by uterine reconstruction, over swing, intrauterine packing with or without bilateral uterine arteries ligation. Caesarean delivery and keeping the placenta in without removing the uterus had no place in the practice. Three-way indwelling catheter was inserted routinely preoperatively. Blood bank notification was given in all cases and packed red blood cells (RBCs) with thawed fresh frozen plasma (FFP) was prepared in the theatre before surgery. SPSS 22 was used for statistical analysis. Anderson darling test was used to see if the continuous variables followed normal distribution which was the case and they were presented as mean and standard deviation (SD). Discrete variables were presented as frequencies and percentages. Chi square test was used to analyse the discrete variables, while independent t-test was used to analyse the differences in mean values. P.0.05 was considered significant. 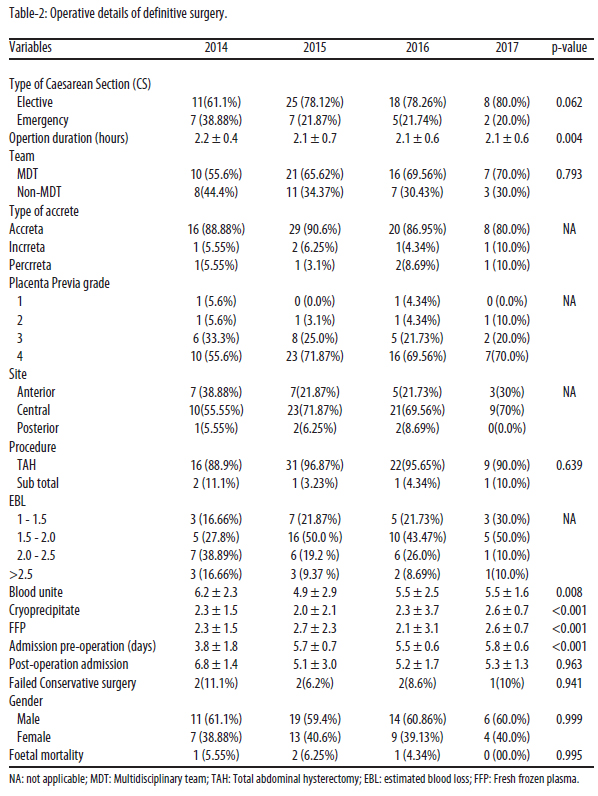 Maternal complications encountered in each year of the four-year study were also noted (Table-3). 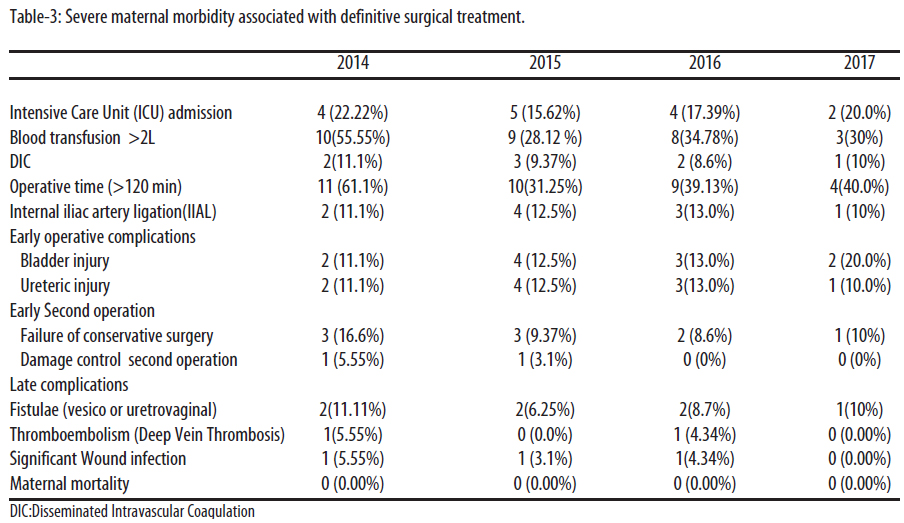 The incidence of PAS varies across geographic populations and as a result of different definitions of 'placenta accreta'. A review of 34 studies reported an average incidence of 189/100,00013 compared to our findings of 162.4 in 2014, 266.7 in 2015, 382.3 in 2016, and 191.5 in 2017. This high incidence may be attributed to higher incidence of CS as well as the study site being a referral centre with standardisation measurement used to manage PAS. A recent meta-analysis reported an OR of 1.96 (95% CI: 1.41-2.74) for PAS disorders after a CS. The ORs for PAS disorders in a subsequent pregnancy increased from 8.6 (95% CI: 3.5-21.1) after one prior CS to 17.4 (95% CI: 9.0- 31.4) after two previous CS, and to 55.9 (95% CI: 25.0- 110.3) after three or more prior CS deliveries. 14,15 The main method for the diagnosis of PASa the study site was trans-abdominal ultrasound with Doppler study. Transvaginal ultrasound had not been used despite the fact that it is superior to trans-abdominal ultrasound and is recommended by RCOG guideline. 2 In PAS, notification to the blood bank should be given and the availability of blood and blood products should be ensured for the patient. The blood bank also should have a well-established massive transfusion protocol, as the median EBL in 3 well-characterised series of accreta cases was 2.5-3.0 L.12 The recommended time to perform elective CS with PAS cases in our centre was 36 weeks of gestation which agreed with a study, 16 while the recommendation by the RCOG is 35-36 weeks unless emergency condition arises. 2 Most other guidelines, including American College of Obstetricians and Gynaecologists (ACOG) and FIGO recommended 34-35 weeks of gestation as a time for an elective operation. 1,17 All elective cases were managed by MDT and emergency one by at least consultant and specialist obstetrician and anaesthetist. This team-based assessment is recommended and is likely to improve maternal outcomes and should be encouraged on a regional basis as seen in multiple studies. 18  CS hysterectomy with the placenta left in situ is the recommended operation for PAS cases unless the affected area is feasible for resection and / or over sewing with or without bilateral uterine artery ligation. 19  In the current study the number of elective versus emergency surgeries was higher in 2017 and lower in 2014 (80% versus 61%) and that decline in the number of emergency operations may be attributed to more awareness and early antenatal detection and referral to the tertiary centre. The overall outcome was reasonable in both elective and emergency cases and which is in line with a study which revealed that emergency deliveries still have reasonably good outcomes if performed in a centre of excellence with MDT. 20 Failure of conservative surgery after trying to preserve the uterus ranged from 8.6% in 2016 to 16.6% in 2014. This incidence was lower than that seen in a systemic review study in 2015 which reported incidence of failure up to 30%.21  PAS is associated with severe maternal morbidity, and in the current study the incidence of admission to ICU was 2- 5% due to RDS and delayed recovery from anaesthesia, and the incidence of ureteric injury was 10-13% which was comparable to a study. 20  Significant intraoperative bleeding with 30-55% of cases over the study period had blood loss more than 2 litres with disseminated intravascular coagulation (DIC) encountered in around 10% and managed by massive blood transfusion with damage control surgery. A study revealed median blood loss in PAS to be 3000mL, with a median of 5 units of red cells transfused and 41.7% had an estimated blood loss of >5000ml. 22  Foetal death in the current study was around 4-6% which was comparable to a study reporting 3-4%.23  This can be decreased by using ultrasound Doppler24

The incidence of PAS was variable over the four years of the study, and it was relatively higher than global data because of high parity and higher number of CS. Maternal and foetal outcomes were comparable.

Disclaimer: None.
Conflict of Interest: None.
Source of Funding: The Department of Obstetrics and Gynaecology, Al-Mustansiriyah Medical College, Al-Yarmouk Teaching Hospital, Baghdad, Iraq.