Objective: To assess the value of phase contrast magnetic resonance imaging cerebrospinal fluid flowmetry in differentiating between normal pressure hydrocephalus and involutional atrophy.
Methods: The descriptive case-control study was conducted at the Al-Yarmouk Teaching Hospital, Baghdad, Iraq, from April to December 2017, and comprised patients with normal pressure hydrocephalus and involutional brain changes. Healthy volunteers were included as controls. Demographic data was recorded and the patients were divided according to age. Conventional magnetic resonance imaging of the brain was performed followed by the assessment of cerebrospinal fluid flow dynamics, was done at the level of the aqueduct of Sylvius. Data was analysed using SPSS 25.
Results: Of the 23 subjects with a mean age of 52.3}16.8 years (range: 25-75 years), There were 13(56.5%) males and 10(43.5%) were females. Also, there were 17(74%) patients and 6(26%) controls. Among the patients, 8(47%) had brain atrophic changes based on magnetic resonance imaging, and 9(53%) had normal pressure hydrocephalus signs clinically and scanning criteria. Flowmetry showed mean systolic velocity 1.5}0.3 cm\sec, peak systolic velocity 1.5}0.3 cm\sec and systolic stroke volume 28.5}4.7μLin the control group which was significantly different from the patients (p<0.001).
Conclusion: Phase-contrast magnetic resonance imaging was found to be a useful tool to differentiate between normal pressure hydrocephalus and age-related brain atrophy.
Keywords: Hydrocephalus, MRI-CSF flowmetry. (JPMA 69: S-78 (Suppl. 3); 2019)

The descriptive case-control study was conducted at Al- Yarmouk Teaching Hospital, Baghdad, Iraq, from April to December 2017, and comprised patients with NPH and involutional atrophy patients as well as healthy controls. The protocol study was approved by the Ethical Committee of Scientific Researches of Diagnostic Radiology at Al-Yarmouk Teaching Hospital. Patients of either gender, aged 25-75 years, were included on the basis of presenting clinical features of NPH symptoms who were referred to have an MRI scans during which involutional brain changes were discovered. Those who were unable to tolerate complete MRI scan were  excluded. Healthy volunteers without neurological symptoms and with normal MRI findings were included as the control group. Demographic data was recorded and additional data was collected from the patients' case sheet and clinical evaluation reports. Normal pressure hydrocephalus diagnosis was made on the basis of clinical symptoms and MRI criteria which included Ventriculomegaly; frontal and temporal horns of the lateral ventricles; upward bowing of the corpus callosum; peri-ventricular high signal on T2- weighted sequences; narrow callosal angle; changes in sulcalsize; a line parallel to the floor of the 4th ventricle; and Sylvian fissures out of proportion to the sulcal enlargement, which was minimal, and hippocampal and mesial temporal lobe volumes, which were near-normal. Imaging features of cerebral atrophic changes in old patients included prominent cerebral sulci (cortical atrophy); and Ventriculomegaly (central atrophy) without bulging of the third ventricular recesses. CSF flowmetry protocol . 23   depends on the analysis of the CSF flow properties at the level of the aqueduct of Sylvius in all patients. All MRI scans were done using a single unit (Philips Achieva 1.5 Tesla SE), and a circular polarized neurovascular coil was chosen. Conventional MRI of the brain was performed, standard axial T1-weight image (T1W1), axial and sagittal T2WI and axial FLAIR images were obtained before CSF flow measurements were made. In PC-MRI, CSF flow dynamics study and electrocardiogram (ECG) gated protocol 23   was used with a high-resolution axial PC protocol 23   and an imaging plane perpendicular to the cerebral aqueduct. PC images were displayed on a gray scale, where low signal intensity indicated caudal flow and bright signal intensity represented cranial flow, while CSF flow quantification was performed on the images using the region of interest (ROI) measurements . 23   and a CSF flow wave form was generated. A circular ROI was drawn to include the pixels that reflected the CSF flow signals of the cerebral aqueduct on the phase images. The ROI was placed in the aqueduct shown on a magnified image with the aid of a mouse driven cursor and was substituted for the diameter of the aqueduct. Because the phase images only showed the CSF flow and not the real anatomical lumen of the aqueduct, the area of the circular ROI was controlled at 1-5mm 2 which contains no stationary brain tissue and is slightly smaller than the diameter of the aqueduct. Following the acquisition of the CSF flow velocity curves, CSF hydrodynamics were analysed in terms of the peak systolic velocity and mean systolic velocity. The mean flow was calculated from the equation: mean flow (cm3/sec) = mean systolic velocity (cm/sec) x area of ROI (cm2), where the mean systolic velocity was automatically determined from the mean value of the measured velocities of each cardiac phase, and the selection of ROI was measured with the aid of a mouse-driven cursor. . 23   Finally, systolic stroke volume was calculated using the equation: systolic stroke volume = mean systolic flow x duration of CSF systole. . 23   Data was analysed using SPSS . 25  , and was presented as mean, standard deviation (SD) and range. Independent ttest and two-tailed analysis of variance (ANOVA) were used to compare the continuous variables between the groups and the least square difference (LSD) post-hoc test was used to sort out significant values. Pearson's Chisquare test was used to assess statistical association between the patients' gender and diagnosis. P<0.05 was considered significant. 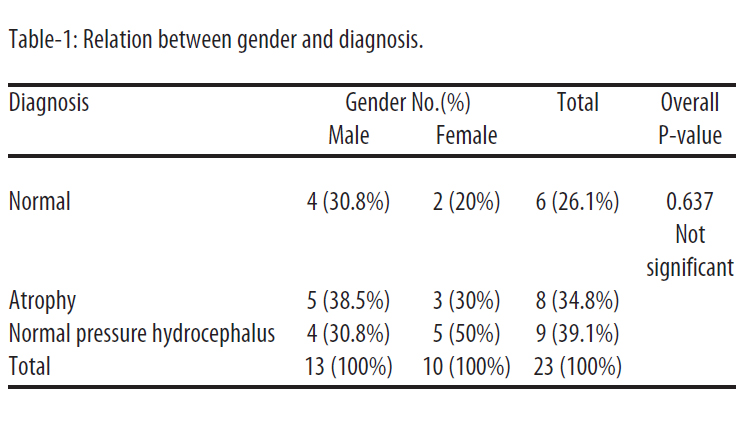 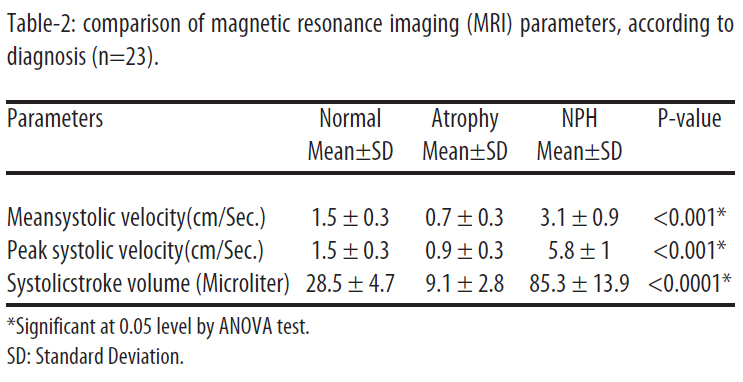 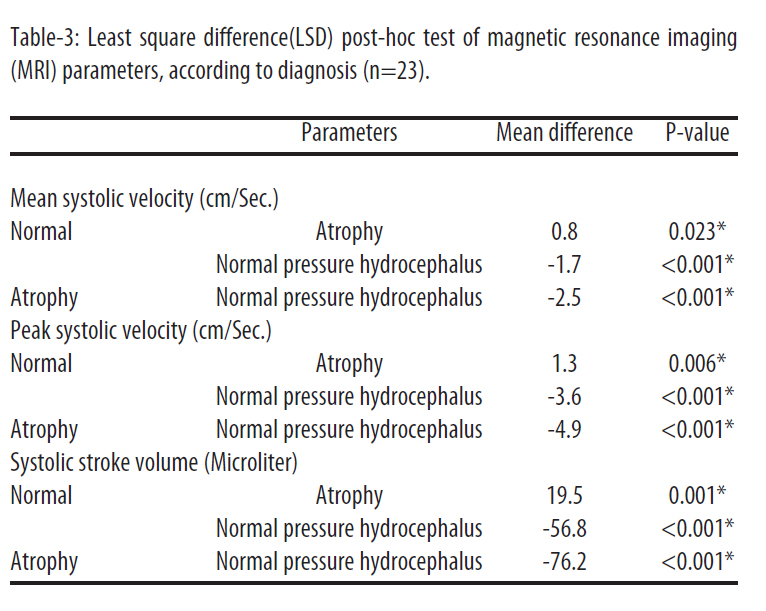 The study found consistent MRI flow patterns in healthy controls compared to involutional brain atrophy and NPH patients. There were no statistically significant differences in mean velocity, cranial and caudal volume, net volume, gender, and mean flow parameters among different age groups. This is in accordance with an earlier study. . 22   In pathological CSF flow dynamics in NPH patients, the systolic peak velocity and the systolic stroke volume were significantly higher than the controls, which means NPH patients had hyper-dynamic aqueduct CSF flow. In cerebral atrophy, blood flow to the brain is decreased, and there was markedly lower systolic peak velocity, systolic mean velocity and stroke volume values compared to the controls which reflect a hypodynamic CSF circulation in the former. In the current study there was a significant difference between specific MRI flowmetry parameters and patients diagnosis, which was in agreement with a study. 23   A relatively wide range of normal aqueduct CSF velocity values measured by the cine-phase contrast MRI technique has been reported In literature and this may be attributed to the different gradient strengths and parameters used by different groups according. 24    Stroke volume of >42 microL has been shown to predict good response from shunting. 25    Upper limit of stroke volume is variable from institution to institution, and is related to intrinsic scanner differences with the suggested upper limit being two times the normal value. 25

PC-MRI was found to be a useful tool in the diagnosis of NPH noninvasively, especially in the elderly, to differentiate it from age-related brain atrophy where differentiation based on clinical and conventional radiological basis may be difficult. PC-MRI provides the potential for non-invasive CSF flow quantification and this should allow for the exclusion of patients with similar symptomatology resulting in dementia caused by vascular, toxic or other causes.