Acute kidney injury (AKI) is a renal-specific condition in which the excretion of toxic metabolites does not depart proficiently due to toxic agents and drugs.1 Diclofenac-induced AKI is due to the toxic effect of diclofenac on renal glomeruli and tubules. Diclofenac provokes tubular dilatation and loss of brush border. 2 Long-term therapies with diclofenac causes dosedependent diminution of renal prostaglandins, leading to disturbances of glomerular function and reduction in glomerular filtration rate (GFR). 3 It has been postulated that diclofenac may exert its toxic effects depending on its dose and kidney-related parameters like plasma coagulation parameters, oxidative damage, and adenosine deaminase enzyme activity. Moreover, diclofenac may cause exhaustion of adenosine triphosphate (ATP), lipid peroxidase, mitochondrial dysfunction and reduction of intracellular calcium concentrations. 4 The kidney injury caused by diclofenac is mainly due to the induction of renal vasoconstriction. Besides, oxidative damage induced by diclofenac toxicity causes note worthy lipid peroxidation of cellular membranes. 5 Additionally, diclofenac provokes renal mitochondrial dysfunction through the inhibition of mitochondrial complex, causing a reduction in ATP generation and apoptosis. Therefore, anti-oxidants are part of the problem in diclofenac-induced AKI. 6 Similarly, diclofenac-induced AKI is linked to the induction of pro-inflammatory cytokines, including interleukin-6 (IL-6), IL-1, IL-33 and tumour necrosis factor-alpha (TNF-α) that induce renal nuclear fragmentation and condensation. 7 Berberine belongs to the family of isoquinoline alkaloids derived from berberis plants. It has anti-oxidant and anti-inflammatory effects. 8 Berberine improves mitochondrial function via reduction of oxygen consumption rate and by increasing mitochondrial membrane potential to protect against oxidative damage. 9 The reno-protective effect of berberine was thought to happen through a mitochondrial-dependent pathway in rats with renal ischaemia-reperfusion model. Besides, berberine re-organises renal interstitial fibrosis in an  obstructed kidney and protects against the renal damage caused by hypertension in rats. 10 The current study was planned to assess the renoprotective effect of berberine on diclofenac-induced AKI in rats.

13 On day 14, chloroform was used to anesthetise the rats and sharp scissors were used to exudate the rats. The blood sample was centrifuged for 10 minutes at 5000rpm at room temperature after which the supernatant layer was isolated as the serum sample and kept in freezer at - 20°C to be assessed later. Blood urea and serum creatinine were estimated by using an auto-analyser (ILab-300-Biomerieux Diagnostic, Milano, Italy) and they were expressed as mg/dL. Serum malondialdehyde (MDA), superoxide dismutase (SOD), glutathione reductase (GSH), Neutrophil Gelatinase Associated Lipocalin (NGAL), kidney injury molecules-1 (KIM-1), interleukin-18 (IL-18), and cystatin-c (Cyst-c) were measured by enzyme-linked immunosorbent assay (ELISA) kit method according to the instructions given by the kit manufacturer (Myo-bio source, USA). Data was analysed using SPSS 20 and was presented as mean } standard deviation (SD). Unpaired or paired student t test was used to determine the differences. Analysis of variance (ANOVA) followed by Benferroni post-hoc test were used to compare the variables in different groups. The level of significance was set at p<0.05.

Moreover, high blood urea was significantly correlated with renal tubular injury and pro-inflammatory biomarkers during diclofenac-induced AKI (p<0.05). The correlation of blood urea with KIM-1, NGAL and IL-18 was significant (p<0.05 each) (Figure-2). 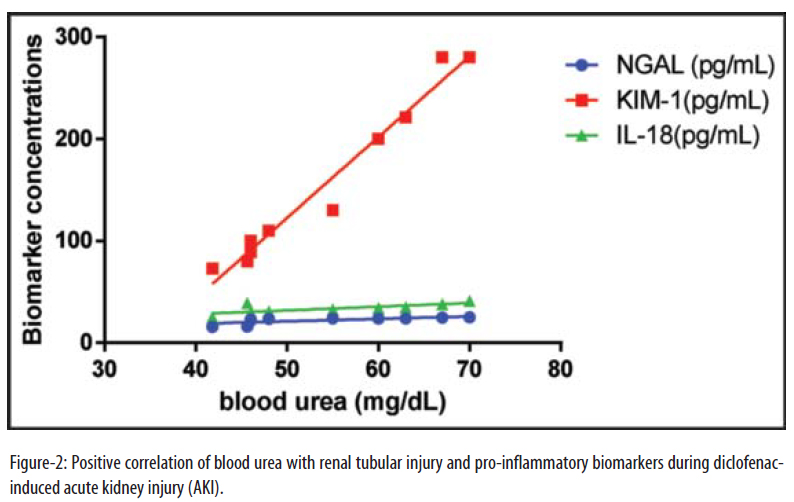 The present study illustrated that diclofenac led to significant AKI through elevation of blood urea and serum creatinine compared to the controls in the experimental rats as supported by Alabi et al. study which illustrated that diclofenac leads to significant renal tubular necrosis. 14 The induced AKI in the present study also showed significant reduction in eGFR due to the development of acute tubular necrosis and glomerular damage. Tomohiro et al. confirmed that short-term administration of diclofenac leads to acute glomerular damage due to potential inhibition of renal prostaglandins which reduces the renal blood flow and causes renal ischaemia. 15 BMI of the experimental rats were high in AKI compared to the controls which was perhaps due to daily bodyweight gain or fluid retention caused by renal damage. Moreover, reduced GFR also takes part in raised BMI via reduction of urine output and development of peripheral oedema as a number of rats developed ascites. An observational study suggested that fluid retention is the main element of AKI. 16 Oxidative stress and diminution of anti-oxidant capacity are the chief mechanisms of diclofenac-induced AKI since high doses of diclofenac administration lead to significant lipid peroxidation which reflect through the elevation of MDA serum levels and reduction of SOD. 17 Moreover, in diclofenac-induced AKI, the inflammatory process in the renal tissues is increased, so IL-18 serum levels significantly increase within a short period of renal injury 18 as revealed in our study. Likewise, diclofenac in the present study increased serum levels of NGAL significantly as NGAL level is correlated with renal tubular damage in diabetic nephropathy. 19 Furthermore, KIM-1 was significantly elevated in the present study compared to the controls. Lan et al. confirmed significant elevation of KIM-1in cadmiuminduced AKI. KIM-1 serum levels are elevated during the initiation of AKI as it increases in both serum and urine as it sheds from the renal proximal tubules. KIM-1 serum is significantly correlated with different grades of renal damage in AKI because it is highly sensitive and specific. 20 Cys-c is a sensitive biomarker for the detection of acute renal damage as it is more sensitive than blood urea and serum creatinine. Harman et al. confirmed that Cys-c is a surrogate biomarker for AKI and should be incorporated in the estimation of GFR. 21 Therefore, Cys-c serum levels in diclofenac-induced AKI of the present study were elevated significantly compared to the controls. Berberine, when combined with diclofenac, produced significant reduction in the rats' bodyweight and BMI compared to the diclofenac group due to the attenuation of diclofenac-induced nephrotoxicity and amelioration of oedematous status through the improvement of rat GFR, given that berberine improves renal functions with significant protection of renal tubules against diclofenacinduced renal tubules injury. 22 In addition, berberine reduced MDA serum levels and improved the endogenous anti-oxidant capacity via elevation of GSH serum levels, as supported by a study which confirmed significant reno-protective effect of berberine against nephrotoxicity in rats due to antioxidant and anti-inflammatory properties. 23Therefore, anti-oxidant effect is the chief mechanism of berberine in the attenuation of diclofenac-induced AKI. Different berberine derivatives have phenolic groups which activate and up-regulate SOD and GSH in a dosedependent manner. 24 Berberine attenuates renal injury and inflammation via significant reduction of KIM-1since it plays a potential role in the attenuation of gentamicin-induced nephrotoxicity through the reduction of oxidative and inflammatory pathways. 25 Likewise, berberine was successful in the reduction of Cys-c serum levels compared to the diclofenac group which might have been due to significant nephronprotective effect. In sum, berberine attenuates diclofenac-induced AKI through the inhibition of inflammatory and oxidative stress mediated pathways with potential augmentation of endogenous anti-oxidant capacity.

Berberine was found to be an effective agent in the attenuation of diclofenac-induced AKI through the modulation of pro-inflammatory and oxidative stress biomarkers.

Acknowledgment: We are grateful to Prof. Dr. Sadiq M. Al-Hamash for his great support.
Disclaimer: None.
Conflicts of Interest: None.
Source of Funding: None.

Berberine and Pentoxifylline: A novel combination in amelioration of acute kidney injury