Objectives: Nottingham Hip Fracture Score was utilized to evaluate its efficacy to identify high risk pateints interms of 3 months postoperative mortality.NHFS comprises of seven independent predictors that were incorporated into a risk score to identify patients who were high risk for post-operative mortality with hip fracture.

Methods: NHFS was prospectively calculated for 88 patients who underwent surgeries for hip fracture from 25th December 2014 to 25th June 2015 at the Indus Hospital Karachi. Both neck of femur and Intertrochanteric fracture were included. NHFS of ≤4 was considered as low risk and a score of ≥5 as high risk for mortality.

Results: The 3 months post-operative mortality was 22%. Increase in number of mortality was observed in patients who belonged to the high risk (NHFS ≥5) group, with statistically significant relationship when compared with the low risk (NHFS ≤4) group (p=0.01).

Conclusions: NHFS can be used to predict the risk of 3 months postoperative mortality in patients undergoing hip fracture surgery.

Worldwide hip fractures constitute a public health problem. In addition it also accounts for significant financial and social costs.1 Increase risk of mortality has been associated and demonstrated in several studies in patients with hip fractures. Accurate prediction of risk of mortality is important for planning of care, decision making, communication with the patient and the family members.1,2 Several scoring systems have been usedto predict mortality in hip fracture patients like the American Society of Anesthesiologists (ASA), Charlson Co-morbidity Index (CCI) but none is globally accepted. We used newly proposed score called Nottingham hip fracture scoring (NHFS) system to predict postoperative mortality in hip fracture patients.2,3 The distinguishing feature of this score is its simplicity of applicability. NHFS comprises of seven independent predictors of mortality like age, gender number of comorbidities, admission, mini- mental test score (MMTS), admission haemoglobin concentration, living in an institution; and the presence of malignant disease1,4-6 under one score (Table-1). 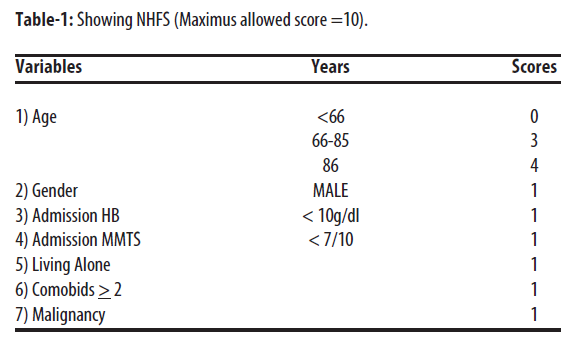 Western literature has proved the efficacy of the score by predicting mortality rate as low in low risk patients (NHFS < 4) in comparison to high in patients with NHFS > 5 at 1 year (15.9% v/s. 45.5%, P<0.001).6 The current study is a pioneer study to predict mortality at 3 months in patients undergoing surgical intervention for hip fractures in Asian population exploiting the simple and easy applicable scoring system i: eNHFS.

A prospective cohort study was carried out from 25th December 2014 - 25th June 2015 (6 months) at The Indus Hospital Karachi, a free of cost tertiary care facility. Non-probability consecutive sample size of 88 patients (44 in each group), who fulfilled the inclusion criteria were included. All patients underwent surgical intervention of hip fractures (intertrochanteric fracture for which DHS was done and neck of femur fracture for which hemiarthroplasty was done). Low risk group (NHFS ≤4) and high-risk group (NHFS ≥5) were compared in terms of mortality at 3 months post operatively. Data analysis was done with SPSS (version 21). Both groups were compared in terms of mortality by applying Chi-square test. Effect modifier/ confounders like age, gender, co-morbid, BMI were addressed through stratification. Chi-square test was applied and p-value < 0.05 was considered significant. Relative risk between low risk and high-risk group was also calculated.

Majority of the patients who presented were elderly patient with a mean age of 68.6±12 years and most common mode of injury was ground level fall, with female predominance (59%) (Table-2). 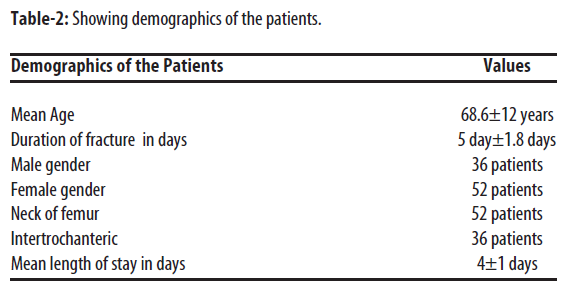 Intertrochanteric fractures are nearly 2 times more common than neck of femur fractures. The mean length of stay was 4.7±2 days. Twenty six patients had Hb < 10gm/dl. Relative hazards shows 1.4 fold increases in mortality in anaemic patients. Fifty five (61.1%) patients had good cognitive function (score 7-10). Majority of the patients with hip fractures had low BMI (< 18 kg/m.m). Most common comorbid was HTN (31 patients), 16 patients had more than 1 comorbid, and presence of comorbids were comparable to the mortality (0.001). Increase chronological age was not statistically significant. The overall mortality over 3 month's postoperative period was 22% (n= 20) (Table-3). 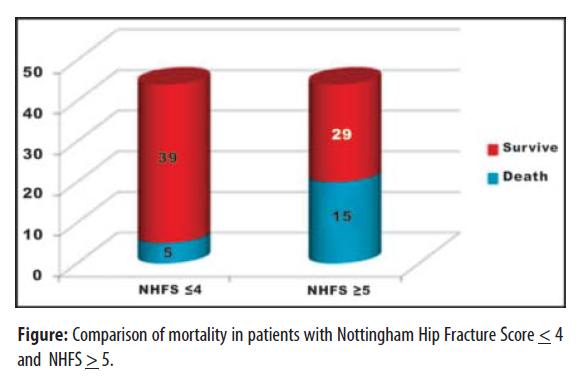 Hip fracture is the most commonly encountered fracture in elderly population, and is associated with low independence, high morbidity and mortality. Furthermore, they have a great impact on quality of life, and are a major source of healthcare budget expenses.7,8 In the current study it was observed that the NHFS can stratify mortality risk in patients who underwent surgical intervention for hip fractures via categorizing them in high and low risk groups. The NHFS stratification value in risk-adjusting outcome comparisons, allows an accurate comparison of postoperative mortality to be made between different units, in addition to providing a benchmark for internal audits. Advantage of the NHFS is its simplicity, the data that are easily and routinely collected from all patients presenting with hip fractures unlike other complex scoring systems such as POSSUM score and Donati score, E-PASS.2,9,10 Most of the patients who presented to us were elderly females with mean age of 68±12 years and with the most common mode of injury being ground level fall. This female predominance is probably due to osteoporosis. Chronological age more than 60 years, was not an independent factor of mortality and which is contrary to other studies.11-13 Mathias Mosfeldt et al in his study showed pre-operative haemoglob into be an independent predictor of mortality in hip fractures.14 In our study 4 out of 7 mortalities had Hb of 10gm/dl or less however it was not statistically significant. Surgical interventions were done within 48 hours of hospital admission and mean time 96 hours of the index trauma as patient presentation to hospital was delayed in some cases. All patients underwent pre-op anaesthesia fitness evaluation. Low body mass index (BMI) is a recognized risk factor for fracture, particularly for the hip fracture in contrast to obesity which claims to be a protective factor.15,16 Majority of our hip fracture patients were with low BMI (average 18 kg/m2). Our 3 months postoperative mortality was 22% (n=20) (Figure-1). Our study demonstrates that NHFS can efficiently identify the high risk patient group (NHFS ≥5 group). Statistical analysis showed comparable results in terms of 3 months post-operative mortality in patients with hip fracture, undergoing surgical intervention (p=0.01). Supporting the literature, high risk group demonstrate three times increase in mortality when compared with the low risk patients (NHFS ≤4) i;e 3.0 (CI 95% 1.19-7.54).17

NHFS can efficiently identify the patients who are high risk for mortality in their first 3 months of surgical intervention of hip fractures. Simplicity of this score makes it a valuable tool for identification of this highrisk group, hence individualizing and prioritizing the level of care especially for those who falls in this group to improve the outcome.

Conflict of Interest: No conflict of interest to declare.

14. Department of Health. The Caldicott Committee: Report on the Review of Patient-Identifiable Information. [Online] 1997 [Cited 2010 April 19]. Available from URL: http://static.ukcgc.uk/docs/caldicott1.pdf