Objective: To measure the psychological distress among the informal caregivers of disabled young adults with traumatic brain injuries (TBI) and to identify its associated factors.

Methods: An analytical cross sectional study was conducted with 76 informal caregivers of young adults (19 – 50 years) with TBI, using admission records of one of the tertiary care hospitals in Karachi, Pakistan from 2015 to 2016. Data were collected using a structured questionnaire comprising a general demographic questionnaire and the General Health Questionnaire- 28. The effect of the predictors on the psychological distress was determined by applying multiple linear regression analysis.

Results: The mean score of the psychological distress was found to be 23.5±14.28. The findings indicated that anxiety and insomnia, and social dysfunction were the most affected domains of psychological distress; whereas, depression was the least affected. Factors including the management of finances, number of children, patient's gender, and patient's level of disability and lack of socialization were positively associated with the level of distress. As reported by participants, religious beliefs served as a coping mechanism for most of them.

Mental health problems are increasing worldwide and are appearing as a global challenge. The World Health Organization reported that, globally, 450 million people are suffering from some mental health problem.1 In Pakistan, the prevalence of mental health disorders such as anxiety and depression, have been reported at around 66% in women and 25% in men.2 Mental illnesses are often associated with some life events that cause mental distress. Such life-events could include unemployment, psychological traumas, and sorrows.3 Almost half of the ICs suffer from significant psychological distress as compared to the general population.4 Several studies have attempted to measure the level of distress among informal caregivers.4-6 Informal caregivers (ICs) are those individuals who provide care to their ill or disabled family members. The focus of this study was to measure the psychological distress among the ICs of disabled young adults, provided that the disability had occurred as a result of a traumatic brain injury (TBI). The prevalence of TBI is globally high, with a denser concentration in the developing countries. Thus, identifying the level of distress among the caregivers of TBI patients will substantiate the need of long-term clinical interventions for the families of TBI survivors.

An analytical cross sectional study design was conducted to assess the level of distress, and to determine factors associated with distress among the ICs of disabled young adults with traumatic brain injury (TBI). Total of 76 ICs participated in the study. The inclusion criteria were; (i) People being informal caregivers for more than 3 months; to exclude immediate psychological distress caused by the event. (ii) Disability is acquired due to TBIs; to meet the purpose of the study. (iii) Participants who could comprehend the Urdu or English language; to obtain accurate and unbiased results. People who hired professional caregivers or were already seeking psychological assistance were excluded from the study. Data were collected from the ICs of patients admitted in one of the tertiary care hospitals in Karachi, Pakistan from January 2015 to March 2016, using a structured questionnaire comprising two sections A & B. Section A of the questionnaire obtained information about the participants' demographics and the characteristics of both ICs and care recipients. The level of disability of patients was measured by using the Modified Rankin Scale (MRS). It is a commonly used tool to assess disability in neurology patients, with a reported inter-rater reliability of 0.56 to 0.78 and a test- re-test reliability of 0.81 to 0.95.7 Section B of the questionnaire comprised of the General Health Questionnaire - 28 (GHQ-28) which is a widely used screening tool for assessing the risk of psychological disorders and distress in the general population.8 The tool has been translated into 38 languages, including the Urdu language and has been tested for validity and reliability. One study evaluated the Urdu version of GHQ-28 and compared it with its English version and found that it has an acceptable linguistic equivalence to the English version.9 Moreover, it is also significantly comparable (P<0.001) with the English version of GHQ-28 for conceptual equivalence with correlation coefficients 0.41 - 0.80 for the Urdu version and 0.39 - 0.86 for English version. In this study, GHQ-28 had an acceptable level of overall internal consistency with Cronbach's alpha of 0.7. Whereas, Cronbach's alpha for dimension of somatic symptoms was 0.68, anxiety and insomnia was 0.78, social dysfunction was 0.69, and severe depression was 0.66, respectively. Permission from the hospital management and the Ethical Review Committee were obtained to access hospital data. An informed written consent was obtained with adequate explanation about the purpose of the study, and the associated risks and benefits of the study to the participants. The participants had the right to refuse and to withdraw from the study during the data collection. Data was analyzed using SATA version 1.2. Both descriptive and inferential analysis were performed. For all demographic variables, frequencies and proportions were measured for categorical variables and mean and standard deviation were computed for continuous and normally distributed variables. The scores of GHQ-28 were reported as mean and standard deviation. The association of factors identified from literature and the GHQ-28 scores were analyzed using step-wise multiple linear regressions (MLR). Throughout the analysis, the confidence level was taken as 95% and p-value less than 0.05 was considered as significant. 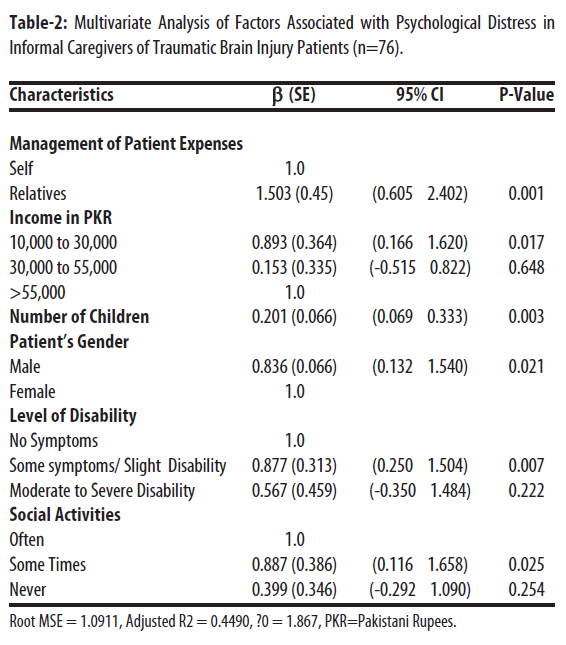 The mean distress score of the ICs of TBI patients was 23.5 (+14.28). This is consistent with a study that measured the distress of ICs of TBI patients in Australia, using the same tool.10 A significant level of psychological distress among the ICs of TBI is also reported in several other studies.11,12 According to the findings of this study, a need of financial assistance for managing patient expenses (patient expense management), low family income, the number of children, patient's gender, and the patient's level of disability and lack of socialization are the significant predictors of the psychological distress among the ICs of young TBI patients. Caregivers, who take financial assistance from other relatives or from welfare organizations for the treatment and rehabilitation of patients, tend to have more distress than those who are able to manage all patient related expenses by themselves. Contextually, these findings are not astonishing, as the majority of the population in Pakistan belongs to the lower income bracket and, yet, medical expenses are often paid out of the pocket. In addition to the study findings, some family members mentioned that they had to sell off all their assets for the treatment and even had to take loans for additional expenses for the rehabilitation of the patient. All the above circumstances have contributed to the psychological distress of the ICs. Consistent with the findings of some previous studies, the current study also revealed that low family income has a significant association with the psychological distress of the ICs.11,13-15 Since the treatment of TBI patients includes a prolonged and expensive phase of rehabilitation, it becomes difficult for the family to bear the cost with limited financial resources. In relation to the current study, several participants mentioned that patients were the earning members of the family before injury; however, they were not able to resume their work after TBI. This resulted in a great dent in the family income causing further distress in the family. The study findings described that, with an increase in the number of children of ICs, their level of distress also increases. This may be due to an increase in the responsibilities of the ICs. Parenting is a full-time job that requires thorough attention. Along with the responsibilities of a parent, taking the role of an IC becomes challenging and leads to distress in the ICs. A study reported that the ICs are 1.32 times more likely to have distress if the patient is male. Similar findings were identified in the current study.16 However, unlike the above findings, another study conducted in Canada, reported that the female gender of the patient had a positive association with the family's level of distress.17 This difference in the findings may be due to the contextual differences. In the context of Pakistan, males are valued more than females. In addition, often, males are the head of the family and their functional status affects the overall family. Like other studies, the majority of the ICs in this study were females; however, no significant correlation was found between the level of distress and the gender of the ICs.10,12,18 Consistent with the findings in the literature, the current study also suggests that the presence of some symptoms (headache, aggression, forgetfulness and low moods) and a slight disability are positively associated with the psychological distress of the ICs.11,18,19 For instance, while sharing their experiences; a few participants reported that they could not share all their problems with the patient as they used to do before the injury because the patient would get stressed and aggressive. On the contrary, one study found no connection in the level of disability and psychological distress;13 whereas, according to one study, psychological distress increases with increase in the level of disability.12 Such variability in the findings may be due to the difference in the role of the injured family member in the family and the extent of support system available for the IC. It was observed in the study that participants who were not involved in any of the social activities had a higher level of distress; this is a congruent with the literature.20,21 Similar to findings in literature, most of the ICs in the study were either parents or spouses of the patients; however, no significant correlation of relationship was found with the level of distress.10-12 Although majority of the study participants were less educated, as compared to the studies conducted in developed countries like the USA; education has not shown any significant association with the level of distress in the ICs.13,22 To the best of the researcher's knowledge, this is the first study that assessed the distress and its determinants among the ICs of young TBI patients in the Pakistani context. Each participant was visited at their residential place by the principal investigator for the purpose of data collection. This has increased the rigor of the study and reduced the chance of biases. Furthermore, in the study, GHQ-28 tool was used, which has already been tested for validity and reliability in more than 35 languages, including its Urdu and English versions, which were used in the current study. The limitation of current study is that data was collected from one setting only which brought in only, seventy-six participants, following the consecutive sampling technique therefore, the findings of the study have limited generalizability. Also, due to the small sample size, the assumption of normality was not achieved, for which data was transformed.

To the best of the researcher's knowledge, this is the first study that assessed the distress and its determinants among the ICs of young TBI patients in the Pakistani context. The findings of the study have shown a comparatively high level of distress in the ICs of patients with slight disability and symptoms such as aggression, low mood, forgetfulness, and inability to perform previous tasks that they were doing before the injury. This calls for the need of psychological screening and support for both the patients and the ICs. It has also been identified from the study that ICs with a lower family income tend to have a higher level of distress. Knowing the fact that in Pakistan medical expenses are paid out of the pocket, low-cost interventions like telephonic psychological consults, support groups, and psychological screening on patient follow-ups could be worked out.

Declaration: The authors declare no conflict of interest.

Authorship Statement: All authors approve that they all have made a substantial contribution to the study for the publication and all have read and approved the final manuscript.