Objective: To compare the effect of etoricoxib, a selective cyclooxygenase-2 inhibitor, with diclofenac, a non-selective nonsteroidal anti-inflammatory drug, on blood pressure in hypertensive patients.

Method: The prospective observational study was conducted at Al-Hussein Medical City, Karbala, Iraq, from July 2018 to March 2019, and comprised patients with hypertension already on antihypertensive treatment. The subjects were divided into 2 equal groups. Those in group 1 received etoricoxib, while patients in group 2 received diclofenac sodium. They were followed up for 2 weeks. Pulse rate, blood pressure and renal indices were noted and compared between the groups. Data was analysed using 2-tailed t-test for continuous variables, and chi-square test for categorial ones.

Conclusion: Etoricoxib was found to be significantly more effective than diclofenac on raising blood pressure of hypertensive patients. With respect to pulse rate and renal indices, the two drugs were not significantly different.

Non-steroidal anti-inflammatory drugs (NSAIDs) are well-known prescribed medications for treating painful conditions, and also for reducing inflammation and fever.1 They exert their action through inhibition of cyclooxygenases (COX) enzymes that produce prostaglandins, and there are two forms of COX enzymes: COX-1 and COX-2. Both of them produce prostaglandins that promote inflammation, fever and pain. But only COX-1 produces prostaglandins that protect the inside layer of the stomach and intestines, and promote blood clotting by activating platelets. So, NSAIDs that inhibit both COX-1 and COX-2 can cause ulcers in the stomach and intestines and increase the risk of bleeding.2

Non-selective NSAIDs are a chemically heterogeneous group of composites that offer considerable health advantages in the treatment of pain and inflammation. However, their use can be associated with an increased risk of gastrointestinal and cardiovascular side-effects. These NSAIDs exert their therapeutic and adverse effects through the inhibition of prostanoid biosynthesis.4 Prostanoids, which include prostaglandins (PG), thromboxane A2 (TXA2) and prostacyclin (PC) or prostaglandin I2 (PGI2), are specialised second messengers due to their ability to cross the cell membrane to the extracellular space and interact with the high-affinity G-protein-coupled receptors that are located on the same original cell or in the neighbouring cells. They play important roles in numerous pathophysiological processes, such as modulation of inflammatory reaction, gastrointestinal cytoprotection, haemostasis and thrombosis, and renal haemodynamics.4,5

Selective NSAIDs act by inhibiting only the COX-2 enzyme, thus permitting the production of the PGs by COX-1 that protect the stomach, while still relieving pain, fever and inflammation. However, they do not exert the anti-platelet effects associated with non-selective NSAIDs. The effect of selective COX-2 inhibitors is more than non-selective NSAIDs on PGI2 which is synthesised in the kidney through the COX-2 enzyme that leads to an imbalance between the effect of PG and PGI2 which subsequently increases vasoconstriction effects on the cardiovascular system5,6 (Figure-1). 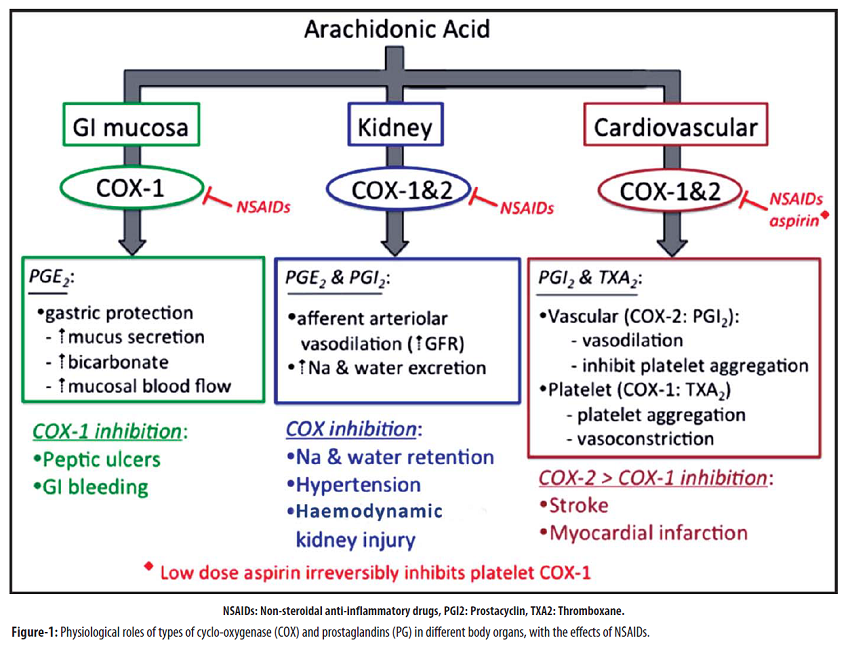 The vasodilatory PGs act to augment renal blood flow and, hence, glomerular filtration rate (GFR) in circumstances associated with a reduction in the actual or effective circulatory volume. Additionally, PGE2 play a role in regulating sodium and water reabsorption, and PGI2 enhances potassium secretion mainly by stimulating renin secretion. So, both PGE2 and PGI2 promote renin release, while COX inhibition represses it.7,8

The most common side effects of NSAIDs are stomach pain or discomfort, indigestion, nausea, vomiting, heartburn, diarrhoea and dizziness. Although serious adverse effects are rare, they do occasionally occur, such as puffiness of the face, swelling and oedema of the hands and the legs, in addition to fainting, difficulty in breathing, palpitation and chest discomfort.9

However, NSAIDs are still frequently used medications and are also available over the counter (OTC). Though they may carry the risk of serious cardiovascular adverse effects, particularly in patients with an existing high-risk cardiovascular profile.10 The mechanism behind fluid retention, hypertension (HTN) and heart failure (HF) with the use of non-selective NSAIDs and selective COX-2 inhibitors may be due to the existence of COX-2 enzyme in the kidneys, and the inhibition of these enzymes results in variable degrees of sodium and water retention, depending on the specific agent used.11,12

NSAIDs may increase blood pressure (BP) in certain patients, especially those with pre-existing HTN appear to be at the highest risk for such an adverse effect. It seems there are inconsistencies among non-selective NSAIDs regarding their impact on BP, such as indomethacin, diclofenac, naproxen and piroxicam that have been associated with clinically significant alterations in BP. Existing data regarding selective COX-2 inhibitors indicate that etoricoxib is more likely than celecoxib to increase systolic BP (SBP).13 These adverse effects of NSAIDs on BP may be correlated to the dose or duration of therapy or to the specific agent used, in addition to patient characteristics.14,15 Both non-selective NSAIDs and selective COX-2 inhibitors may antagonise the effect of antihypertensive medications, including angiotensin-converting enzyme (ACE) inhibitors, beta (b) blockers and diuretics, to an extent that may potentially increase the HTN-related morbidity.15-19

Previous studies had shown that in comparison to placebo and non-selective NSAIDs, the use of selective COX-2 inhibitors was associated with an increase in both SBP and diastolic BP (DBP), along with an enhanced risk of developing hypertension.20-24 However, there were insufficient observational studies, which might be more representative to the real-world clinical settings, to assess the effects of selective COX-2 inhibitors in comparison with non-selective NSAIDs.

The current study was planned to compare the effect of selective COX-2 inhibitor etoricoxib with non-selective NSAID diclofenac on BP in patients with HTN.

The prospective observational study was conducted at Al-Hussein Medical City, Karbala, Iraq, from July 2018 to March 2019. After calculating the sample size using an online calculator25 the sample was raised by including adult patients of either gender with HTN already on antihypertensive treatment who required the use of either selective or non-selective NSAIDs for painful conditions, such as arthritis or any musculoskeletal problems. Those with renal, liver or HF conditions were excluded. The antihypertensive medications used by the patients were in the form of ACE inhibitors, angiotensin receptor blockers, calcium channel blockers, beta blockers or diuretics.

The study was approved by the local Ethical Review Committee (ERC) in Kerbala University - Medical Faculty.

Subjects were recruited from those hypertensive patients who attended the outpatient clinic in Al-Hussein Medical City for painful conditions and required the use of NSAIDs. After taking verbal consent from all the subjects, they were divided alternately into two equal groups. Those taking etoricoxib 90mg/day formed group 1 and those on diclofenac 100mg/day formed group 2. The patients' weight and height for the calculation of body mass index (BMI), as well as pulse rate and BP were noted in addition to blood urea and serum creatinine. The upper BP range was set according to the American College of Cardiology guidelines.26 The values were noted at the baseline and at the follow-up period 2 weeks later post-intervention.

All analyses were performed using Microsoft Excel 2010 with commercially available statistical calculator. Continuous variables were presented as mean ± standard deviation (SD), and categorial variables as frequencies and percentages. The two groups were compared using 2-tailed t-test for continuous variables, and chi-square test for categorial ones. Statistical significance was taken as p<0.05. 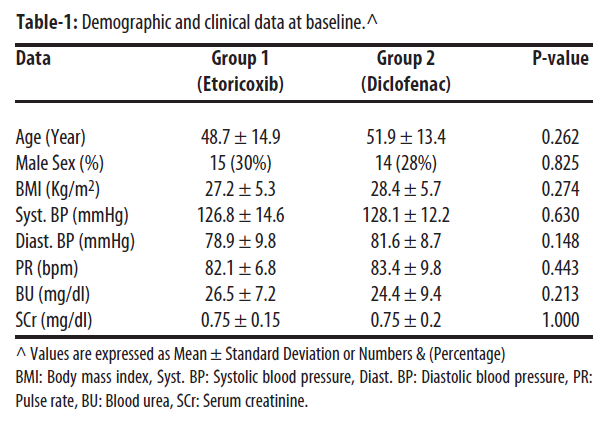 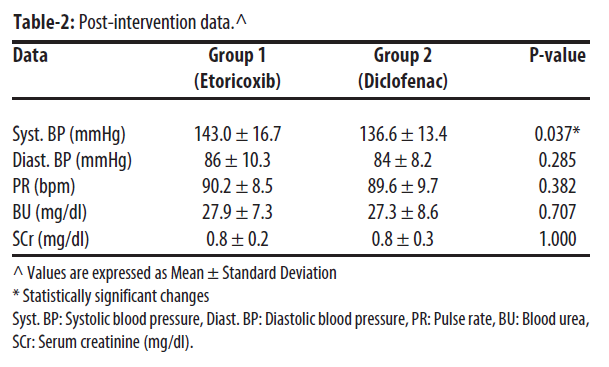 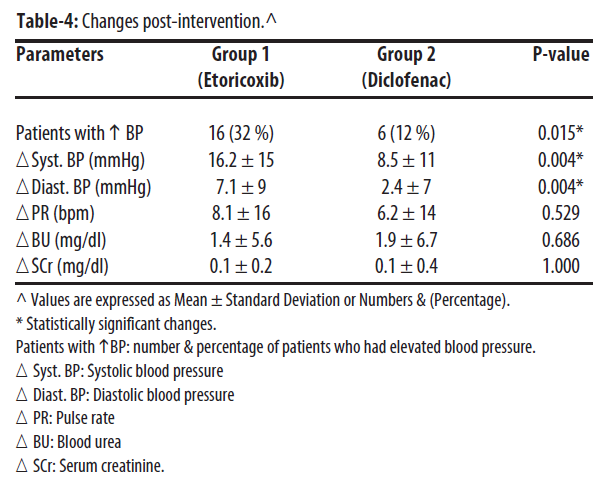 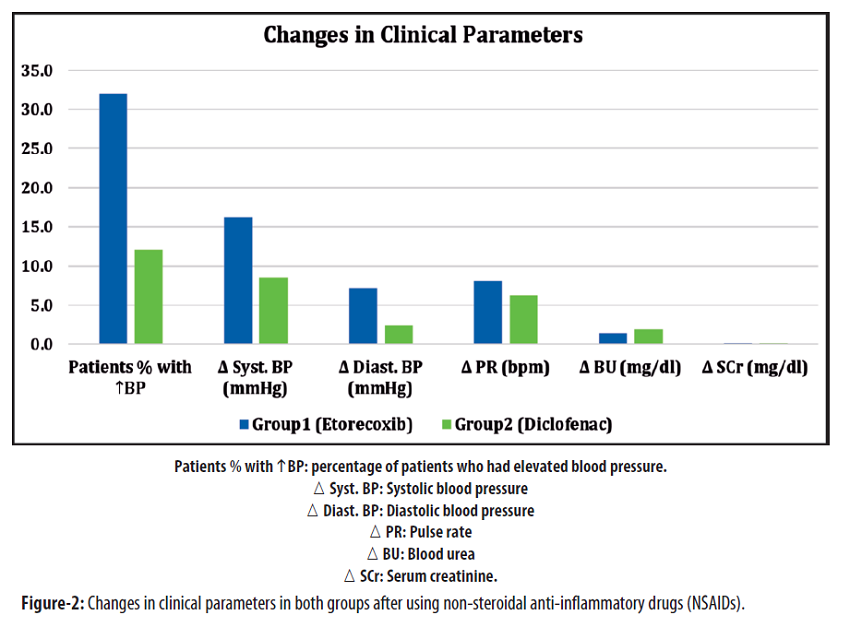 Although NSAIDs are widely used medicines, they are not always suitable for every patient and may sometimes cause worrying adverse effects.14

To start with, the demographic parameters in the current study, including age, gender and BMI, and clinical parameters, including pulse rate, BP, blood urea and serum creatinine were not significantly different between the groups at the baseline.

Post-intervention, mean SBP in group 1 was significantly higher than that in group 2, while there was no significant difference in the mean DBP, pulse rate, blood urea and serum creatinine.

In terms of intra-group comparisons, there was a significant increase in both SBP and DBP in both the groups compared to the baseline values.

This increase in SBP and DBP post-intervention in group 1 was more than group 2 probably because the effect of selective COX-2 inhibitors on PGI2 in the cardiovascular and renal systems is more than that of non-selective NSAIDs at the expense of TXA2, which leads to an imbalance between the effect of PG and PC that subsequently increases the vasoconstriction on the cardiovascular system and, hence, increases the BP.19,20 This finding is supported by several studies.20-24

Possible options for patients who develop HTN due to NSAID use include reducing the dose of NSAID, use of non-NSAID analgesics, dietary salt restriction, or treatment with calcium channel blockers that reduce the renal vasoconstriction and/or diuretics though it is less effective with the use of NSAIDs.14,15

However, it was noticed that the effects of etoricoxib on increasing the pulse rate were slightly more than those in the diclofenac group, although it was statistically non-significant. In contrast, another study found that selective COX-2 inhibitors NSAIDs reduced the heart rate and increased heart beat irregularities.27

Physicians frequently prescribe NSAIDs to patients with HTN, and especially prefer the selective ones due to their well-known fewer side-effects, but it should be done with caution as they can increase the BP more than the non-selective ones.

Selective COX-2 inhibitor etoricoxib was found to have a significant effect on raising BP in hypertensive patients more than the non-selective NSAID diclofenac, with no significant difference in terms of pulse rate and renal indices.