Objective: To evaluate the effect of nebulized budesonide plus salbutamol on mild to moderate acute exacerbation of asthma in children in comparison with nebulized salbutamol alone.

Methods: A comparative clinical study was conducted in Karbala Teaching Hospital, for children from January 2016 to January 2017 on patients aged 1 to 12 years who presented to emergency department (ED) with mild to moderate asthma exacerbation. One hundred patients with mild to moderate acute asthma had been interviewed in the ED using a specific questionnaire designed for the study. Baseline pulmonary index score (PIS) had been done for each patient then patients were randomly allocated into two groups; group A- Salbutamol group (50 patients) and group B- Budesonide plus Salbutamol group (50 patients). PIS had been measured for each patient every 30 minutes (at baseline, 30, 60, 90 minutes), and their fate had been determined whether discharged from hospital or continue the treatment according to PIS.

Conclusions: Treatment of asthmatic children having mild to moderate acute exacerbation with a combination of nebulized budesonide plus salbutamol resulted in significant clinical improvement and reduction in the duration of emergency department stay compared to children on nebulized salbutamol monotherapy.

Asthma in children is a chronic disorder in developed countries, the epidemiological data showed that nearly 7 million children in the USA have been diagnosed with asthma.1 In Iraq, the International Study of Asthma and Allergies in Childhood (ISAAC) showed that 16.3% of primary school children had asthma.2 Because most parts of the country lack specific programmes to control the disease, emergency department visits, hospitalisation, and school absence due to asthma were recently increased.3 Asthma symptoms include recurring attacks of coughing, wheezing, chest tightness, and shortness of breath.4 Throughout recovery from an asthma attack, the sputum may look pus-like due to the presence of eosinophils in high levels.5 The severity of asthma can be estimated either depending on a clinical feature or by pulmonary function test.6 The clinical asthma severity scores have been designed to evaluate initial exacerbation severity in the acute care setting. The Pulmonary Index Score (PIS) is a score based on five clinical characteristics of asthma: inspiratory to expiratory ratio, respiratory rate, degree of wheezing, oxygen saturation, and accessory muscle use (Table-1).7 Each character has been assigned a score from 0 to three. As an overall rule, a score under seven indicates an exacerbation of mild severity, a score of seven to eleven indicates an exacerbation of moderate severity and a score of twelve and more indicates a severe attack. Total scores range from 0 to fifteen. The PIS has been validated and used as an outcome measure in several clinical trials.8-10

For patients with PIS less than 7 (mild asthma exacerbation), treatment includes salbutamol inhalation therapy administered via a small volume nebulizer at a dose of 0.15 mg/kg (minimum 2.5 mg and maximum 5 mg per dose). If recurrent doses are required, they should be given every twenty to thirty minutes for 3 doses. For patients with PIS seven to eleven (moderate asthma exacerbation), administration of supplemental oxygen if oxygen saturation <92 percent in room air, salbutamol nebulization alternates with ipratropium bromide nebulization each twenty to thirty-minute for 3 doses or continuously with the administration of systemic glucocorticoids soon after arrival in the ED.11 If the clinical improvement was insufficient despite treatment with ipratropium bromide, beta-agonists, and systemic glucocorticoids, the patients should be administered intravenous magnesium sulfate (75 mg/kg, maximum 2.5 g given over 20 minutes).12 The addition of nebulized budesonide to systemic prednisolone in the treatment of acute asthma in children decreases the risk of recurrence of exacerbation for the subsequent month.13 The actions of inhaled corticosteroids (ICSs) are divided into delayed actions and rapid actions. The delayed actions (taking hours or days) by effect on genomic mechanisms required to change the protein expression, while the rapid actions (within seconds or minutes) mediated through membrane-bound glucocorticoids receptor and direct interaction with the airways vasculature by non-genomic mechanisms with faster onset effect occurs by inhaled route than systemic steroids.13,14 There may be also a benefit from ICS with the concomitant use of inhaled beta2-agonists through enhancing beta2-agonist responsiveness. Thus, ICS has attracted attention as a potential alternative to systemic therapy in acute asthma.15

This study was conducted to compare the effect of nebulized budesonide plus salbutamol with nebulized salbutamol monotherapy in children with mild to moderate acute attacks of asthma.

This comparative clinical study was conducted in Karbala teaching hospital for children from January 2016 to January 2017 on 100 patients aged 1 to 12 years who presented to the emergency department (ED) with mild to moderate asthma exacerbation. Patient selection had been done according to specific inclusion and exclusion criteria

The inclusion criteria were: children during mild to moderate acute asthma attack in the age range, 12 months to 12 years.

The sample size was determined according to sample size formula for clinical interventional studies.16

The study was conducted via a specific questionnaire designed for the study. Selected patients had been interviewed in the ED using this questionnaire. Baseline PIS had been done for each patient then they were randomly allocated into one of the following groups:

Salbutamol group: This group included 50 patients who received a salbutamol dose (2.5 mg) every 30 minutes during their stay in the ED by jet nebulizer through a face mask.

Combination group (budesonide plus salbutamol): This group included 50 patients who received budesonide nebulizer suspension (500 µg) per dose mixed with salbutamol solution (2.5mg) per dose every 30 minutes during their stay in the ED by jet nebulizer through a face mask.

Assessment of asthma severity was done for each patient according to pulmonary index score (Table-1).7

Drug preparation: The dose had been prepared in the pharmacy of the ED before administration to the patients immediately, as follows:

Budesonide plus salbutamol dose: 1ml (500 µg) of budesonide suspension was mixed with 0.5 ml (2.5 mg) salbutamol solution which was further mixed with 2 ml of normal saline in a 5 ml disposable syringe.

PIS was measured for each patient every 30 minutes (at baseline, 30, 60, 90 minutes), and their fate had been determined whether discharged or continue treatment according to PIS.

The Signs of clinical improvement for each patient included:

1- Respiratory rate less or equal to 30 /min for age above five years.11

3- No signs of dyspnoea.

4- O2 saturation increased more than 92% at the room air.

Ethical consideration: The study protocols were approved by the Scientific Council of Paediatrics of the Arab Board for Health Specialization. Parents consent had been obtained prior to participation in the study.

Statistical analysis: Data was transformed into a computerized database and analyzed using the Statistical Package for Social Science (SPSS) version 22, 2013, USA. Descriptive statistics were presented as mean, frequencies, percentage, and standard deviation. Differences of data was expressed as percent (%) between groups which were examined by Chi-square test and differences of data expressed by mean ± SD examined by t-test. The paired t-test was used to express differences at baseline and after treatment. The level of significance (P-value) was set at < 0.05 to be considered significant. 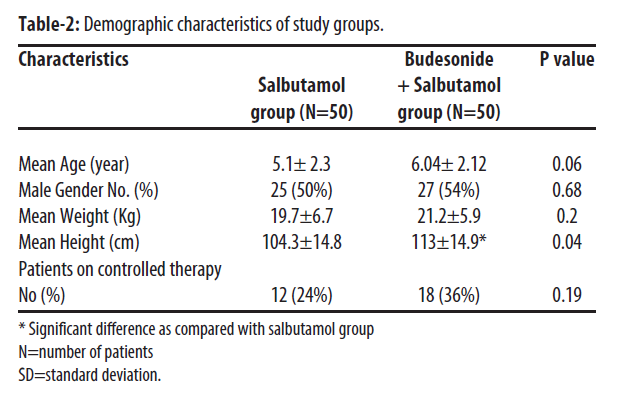 The PIS was significantly (p<0.05) reduced in patients in ED treated with salbutamol after 30, 60, and 90 minutes as compared with their score at baseline 30 and 60 minutes respectively, as shown in Table-3. 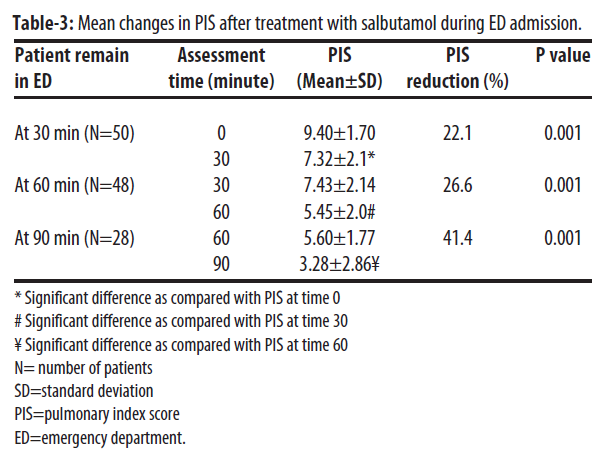 The PIS had been significantly (p<0.05) reduced for patients treated with salbutamol plus budesonide in ED after 30, 60, and 90 minutes as compared with their score at baseline 30 and 60 minutes respectively, as shown in Table-4. 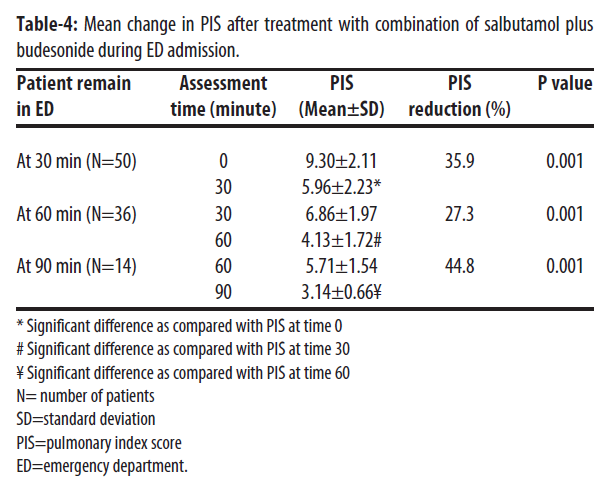 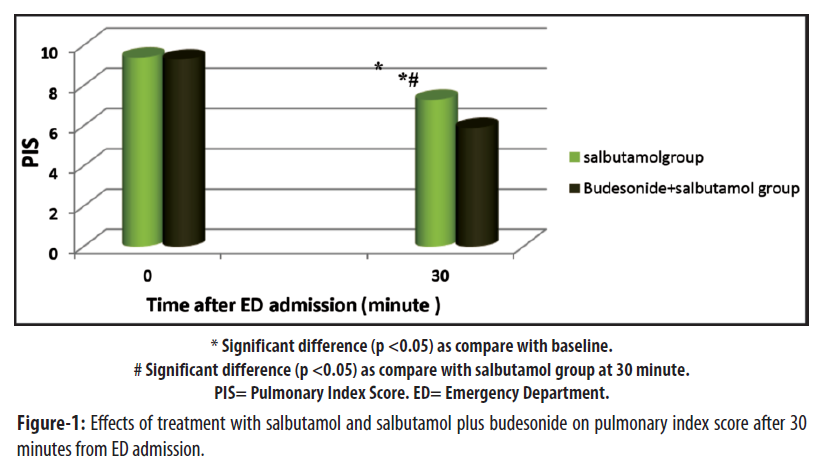 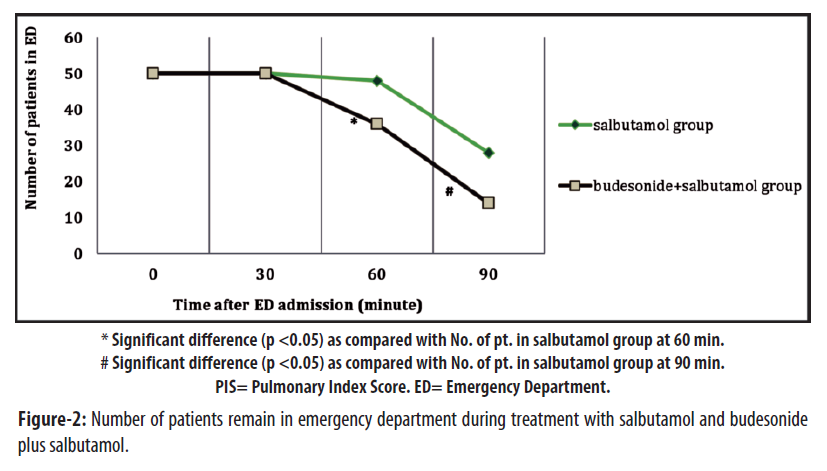 The mean duration of stay in ED was significantly shorter (p<0.05) in patients treated with nebulized budesonide plus salbutamol, as shown in Table-6.

Recent guidelines showed that the constant doses of nebulized salbutamol showed significant improvement in children with acute asthma through three-session intervals during ED admission. This decreased the number of asthmatic children's stay in the department for first-line management due to acute asthma exacerbation.17 The present study showed that the constant administration of combined budesonide plus salbutamol recovered the pulmonary index score at 30-, 60-, and 90 minutes intervals with significant clinical improvement (p<0.05) and reduced PIS which reached 44.8% at 90 minutes (Table-4). At specific time intervals when comparing the two groups, it was observed that the administration of budesonide with salbutamol improved the pulmonary index score during the first 30 minutes of treatment (p<0.05) which was about 14% less than that of the salbutamol group. The recent results agreed with a study done by Chen et al,18 who demonstrated that a high dose of nebulized budesonide and at short periods combined with rapid-acting bronchodilators, an additional bronchodilator response is associated with fast and better improvement of clinical lung function in asthmatic children with acute exacerbation.

In this study, the number of patients who stayed in ED after 60 minutes from admission, decreased significantly (p<0.05) after budesonide was added to the conventional (salbutamol) therapy. Another important outcome was that the budesonide group had a shorter treatment time (mean, 63.3±21.7 minutes, versus salbutamol, 77.4±16.13 minutes) and this result agreed with Razi et al's study, which showed that, for children with acute asthma exacerbations, an addition of 2 mg/day of nebulized budesonide to standard therapy significantly reduced the length of stay in hospital.22 On the economic side, treatment of asthma constitutes a big load on health care resources and also is a cause for the absence of parents of children with asthma from work.1 Therefore shortening the length of hospital stay provides significant economic and social benefits in saving health service resources, particularly in Iraq.3

Treatment of patients having mild to moderate acute exacerbations of asthma with the combination of nebulized budesonide plus salbutamol resulted in significant clinical improvement and shortening in the duration of emergency department stay when compared with nebulized salbutamol monotherapy.